Watch: IAF Brings Back 168 People From Afghanistan Including 107 Indians

A special repatriation flight belonging to the Indian Air Force brought back 168 people from Afghanistan today, a week since the Taliban took control of most parts of Afghanistan. 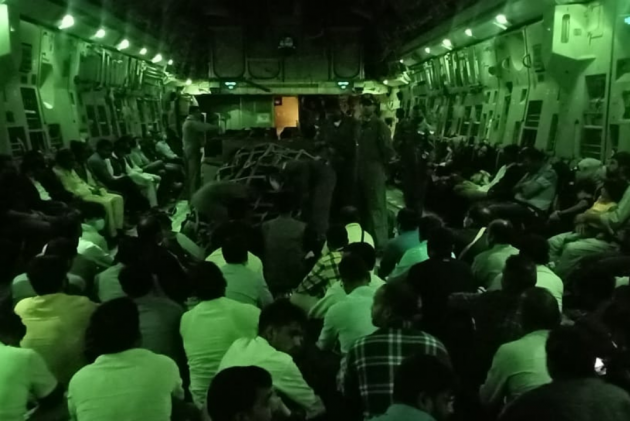 A special repatriation flight belonging to the Indian Air Force brought back 168 people from Afghanistan today, a week since the Taliban took control of most parts of Afghanistan. The passengers, including 107 Indian nationals, landed at the Hindon airbase near Ghaziabad after taking off from Kabul airport on Sunday morning.

Images of the passengers boarding the flight were earlier shared by  Arindam Bagchi, the spokesperson for the Ministry of External Affairs.

Evacuation continues!
IAF special repatriation flight with 168 passengers onboard, including 107 Indian nationals, is on its way to Delhi from Kabul. pic.twitter.com/ysACxClVdX

The nationalities of the remaining 61 Afghans evacuated on the plane was not mentioned. According to reports in NDTV, the passengers included two Afghan senators and 24 Afghan Sikhs including Afghanistan's MP Narender Singh Khalsa who breaks down upon reaching India.

300 Indians To Be Brought Back From From Afghanistan, Here's All You Need To Know

"I feel like crying...Everything that was built in the last 20 years is now finished. It's zero now," he can be heard saying in a video that has been going viral on social media.

"I feel like crying...Everything that was built in the last 20 years is now finished. It's zero now," he says. pic.twitter.com/R4Cti5MCMv

The evacuation comes a day after 87 Indians were taken to Tajikistan capital Dushanbe from Kabul on board a military transport aircraft of the Indian Air Force and the group is being brought back to Delhi in a special Air India flight from the central Asian city early on Sunday.

Earlier in the day, Bagchi confirmed that the 87 passengers were also on their way home from Tajikistan.

Bagchi had tweeted on Saturday that two Nepalese citizens are also coming to India on board the Air India flight.

Meanwhile, the chaos around Kabul's international airport saw another seven Afghan civilians killed in crowds, the British military said Sunday, showing the danger still posed to those trying to flee the Taliban's takeover of the country.

The deaths come as a new, perceived threat from the Islamic State group affiliate in Afghanistan has seen US military planes do rapid, diving combat landings at the airport surrounded by Taliban fighters. Other aircraft have shot off flares on takeoff, an effort to confuse possible heat-seeking missiles targeting the planes.

Bagchi had earlier tweeted videos of the passengers from inside the plane, cheering as they waited for the flight to take off from Tajikistan.