Watch| Lost In Translation: Puducherry CM Conveys The Opposite Meaning To Rahul Gandhi

The incident occurred on Wednesday when Congress leader Rahul Gandhi was interacting with the fisher community at Nellithope, Puducherry 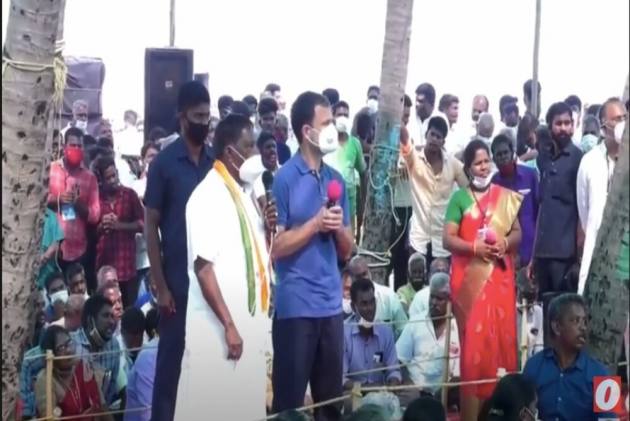 The beleaguered Puducherry Chief Minister V. Narayanaswamy, already struggling to save his government, was caught on camera misrepresenting a fisherwoman’s grievance to Congress leader Rahul Gandhi on Wednesday.

While Rahul Gandhi was talking to the fisher community at Nellithope during his Puducherry visit today, a middle-aged woman complained that very little has changed for them over the years. “No one comes to our support. Even he (pointing to Narayanaswamy) did not visit us after the cyclone,” she complained in Tamil even as the audience cheered.

When Rahul turned to the Chief Minister saying “Tell her we would look into it”, Narayanaswamy who was acting as interpreter, interjected hurriedly and cleverly twisted the woman’s words while translating it into English: “During that time, during Nivar cyclone, I came and visited the area and gave relief to them. That she is saying.” Essentially the CM conveyed to his leader exactly the opposite meaning of what the woman meant. He converted her complaint into praise.

Ultimately the joke was on poor Rahul since he had to go by what his chief minister conveyed to him and not the exact feelings of the poor woman.