Watch: No Scissors At An Inauguration, KCR Loses Cool, Pulls Off The Ribbon

With no scissors at an inauguration event, Telangana CM K Chandrasekhar Rao lost his patience and pulled off the ribbon with his hand from a door 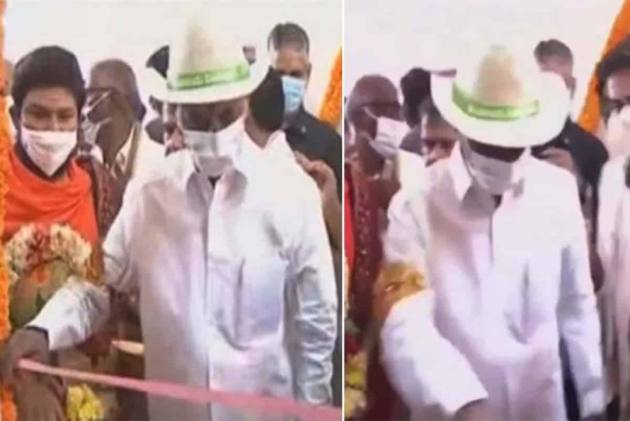 In a video that is making rounds on the internet, Telangana Chief Minister K Chandrashekar Rao was seen impatiently pulling out an inauguration ribbon at a community housing site with his hands after organisers failed to secure a pair of scissors to do the job.

The video showed the chief minister, along with several people and reporters waiting as organisers went around, looking for a pair of scissors. Due to the missing scissors at an inauguration ceremony, CM KCR quickly loses patience and promptly pulls off the ribbon with his hand from a door.

No scissors at hand, CM #KCR pulls away ribbon to inaugurate the #TRS Govt Flagship 2BHK Dignity housing scheme in Sircilla. After waiting for few minutes CM #KCR pulled the ribbon and walked in. #Telangana pic.twitter.com/qaLmL0wGdk

The chief minister was inaugurating community houses in Mandepalli village in Rajanna Sircilla district on Sunday, July 4, when the mismanagement happened.

For the unversed, the housing community, which consists of 1300 flats, has been named ‘KCR Nagar’ and was built at a budget of Rs 80 crore.