The incident occurred at Vangani railway station near Mumbai on April 17, officials said 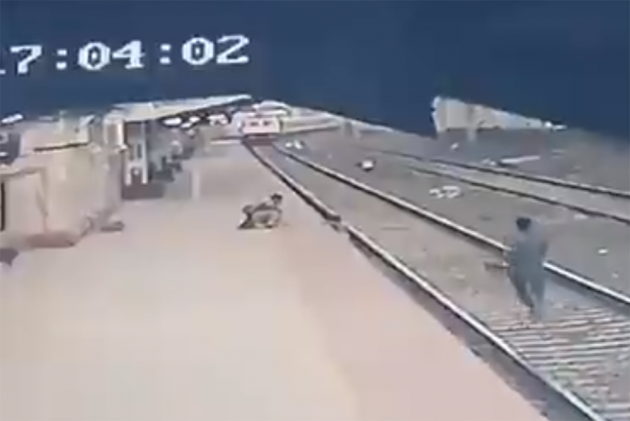 In an act of extraordinary courage, a railway pointsman at Vangani railway station near Mumbai saved the life of a six-year-old boy, who fell on a railway track, by hauling him onto a platform just seconds before a speeding train approached the platform.

The CCTV footage of the incident shows railway pointsman Mayur Shelke jumping onto the railway track at platform number 2 to rescue the boy, while a speeding train headed towards them. The train passed the spot where the child had fallen, just two seconds after he and Shelke made it to the platform.

Lauding Shelke for his quick thinking and courage, Railway minister Piyush Goyal on Monday shared the CCTV footage of the incident and tweeted, “Very proud of Mayur Shelke, Railwayman from the Vangani Railway Station in Mumbai who has done an exceptionally courageous act, risked his own life & saved a child's life.”

Very proud of Mayur Shelke, Railwayman from the Vangani Railway Station in Mumbai who has done an exceptionally courageous act, risked his own life & saved a child's life. pic.twitter.com/0lsHkt4v7M

According to passenger activists, the boy accompanied by a blind woman fell on the tracks when they were walking close to the edge of the platform around 5 pm. Coincidentally, a speeding outstation train was approaching the platform at the time.

"The child was so small that he was unable to climb the platform. At the same time train no. 01302 Up (Udyan Express) was approaching on the same track speedily," the Central Railway said in a release, adding that the woman on the platform was desperately shouting to save the child.

"Goyal also said that Shelke's work cannot be compared to any prize or money, but he will be rewarded for inspiring humanity with his work," the release stated.

"Excellent work done by Central Railway Mumbai Division Mr Mayur Shelkhe (Pointsman) saved the life of a child who lost his balance while walking at platform no.2 at Vangani station," the DRM tweeted.

Excellent work done by Central Railway Mumbai Division Mr Mayur Shelkhe (Pointsman) who saved the life of a child who lost his balance while walking on platform no. 2 at Vangani station. pic.twitter.com/ofXWR7qGtO

Vangani railway station, located 90 km away from here, falls on the Central line of the Mumbai suburban network.