We Are Ready To Continue Dialogue, Govt Needs To Invite Us: Rakesh Tikait

'A strong opposition is needed for (building) a strong nation. Those in government today had also played the role of opposition in the past,' Rakesh Tikait said 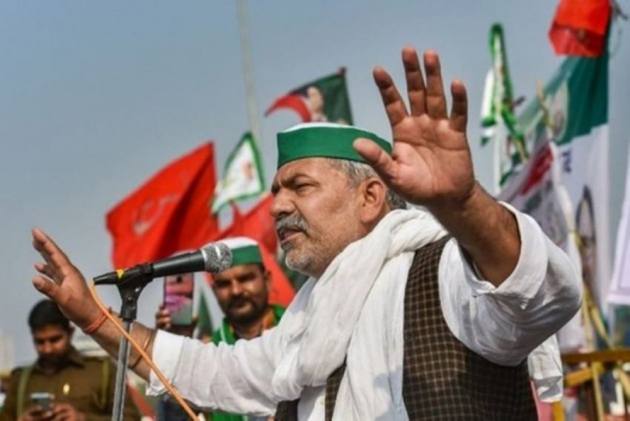 Bharatiya Kisan Union (BKU) leader Rakesh Tikait feels that for the country to be strong there needs to be a strong opposition and the participation of youths in driving “three Ts”.

“The three Ts are tank, tractor, and Twitter. Youths in Army drive the tank, those in farming the tractor and the tech-savvy need to drive the Twitter,” philosophized the poster boy of ongoing protests against the Centre’s three agriculture laws.

And in jest, “Oh yes! Then there is a fourth ‘T’ – the Tikaits – standing beside the youths,” he adds.

When pointed out that farmer leaders had promised to keep politics and politicians away, Tikait defended his recent meeting with West Bengal Chief Minister Mamata Banerjee.

“A strong opposition is needed for (building) a strong nation. Those in government today had also played the role of opposition in the past,” he said.

“I think if those who agree in principle with our demands, including opposition parties, unite in support of our cause, the government will have to accept (the demands),” the 52-year-old farmer union leader stated.

However, he hastened to add that any political leader visiting the sit-in protest sites to show solidarity will not be allowed to step onto the ‘dharna match. And no political flags, banners, or signs will be allowed to be displayed.

The path ahead is long and uncertain; then there are the vagaries of nature. Thousands of farmers are sitting at Delhi’s borders since November 26 in protest. Many makeshift shelters have collapsed in the downpour and when the sun is out, the forty-plus degrees Centigrade heat is unbearable.

The Centre has already engaged in 11 rounds of talks with them but since January-end there have been no dialogues. The Union government wants them to drop the demand for a complete rollback of the new laws for negotiations to continue.

But the unions remain unmoved. Among other points, at the top among their chart of demands, they are seeking a repeal of the three laws and legalisation of minimum support price (MSP).

“We are ready to continue a dialogue. But the government needs to invite us for talks without any conditions,” he stated.

On their part, ministers representing the Centre have also indicated their willingness for a dialogue, but they want the farmers to drop their condition for a total repeal of the laws.

Considering the precariousness of the situation, will he continue with the political outreach? Rakesh Tikait appeared to be certain that some Chief Ministers or their representatives are likely to visit the sit-in protest sites at the borders of the National Capital.

“We will make arrangements so that they may take part as supporters of our cause, not as political leaders,” he claimed.

Tikait also denied reports that he had refused to be part of the protests scheduled by Samyukta Kisan Morcha (SKM) – the umbrella organization representing various farmer unions.

“BKU members will try to deliver a memorandum to the Governor in Lucknow on June 26. I will be at the Ghazipur protest site that day,” he clarified.

“I guess they surmised my not going to Lucknow as the BKU not participating. They are just making a conjecture,” he stressed, adding: “We have to be peaceful even when being forceful.”

The SKM had announced that sit-in protests will be held at Governor Houses across the country on June 26 to mark the completion of seven months of their agitation. They will also send memorandums to President Ram Nath Kovind.

According to SKM leaders, the day will be observed as ‘kheti bachao, loktantra bachao diwas (save farming, save democracy day)’. They also want to remind the country about ‘the Emergency’, which was declared in 1975.