The documentary presents a densely packed yet riveting account of the Hong Kong protests from 2014 onwards. Its intimate, incisive exploration highlights the ideals, passions and tribulations of the activists on the frontline 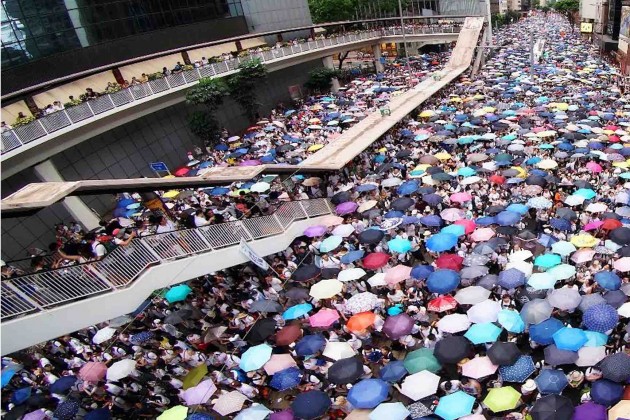 “Rogue police, return the eye.” As the chant resonates, surging crowds sweep the screen and the camera tracks into the chaos. We Have Boots begins on a dire note: there is no easing in, no gradual segue—the viewer is directly immersed in the frenzy of the protests. In August 2019, the Hong Kong police allegedly shot a beanbag round at a volunteer medic, injuring her right eye. She became a symbol of resistance and many wore eye patches and bloodied bandages to highlight police brutality.

As an Indian, the incident resonates strongly. In December 2019, a 26-year-old in Delhi lost an eye after police action against students of Jamia Millia Islamia, many of whom were marching against the newly legislated Citizenship (Amendment) Act. But that’s not where the similarities end. Whether it is the brutality unleashed by the police, the trailing ‘counter-protestors’, the siege of universities, or mobs attacking demonstrators as the police look away, it seems as if the Chinese and Indian regimes are implementing strategies from the same authoritarian playbook to quell opposition.

But We Have Boots does not just trace a chronology of events. As it flits from the Umbrella Revolution of 2014 to the leaderless protests against the extradition bill in 2019, we meet the people fighting for the cause. Agnes Chow, barely an adult, describes herself as an “average schoolgirl” who hated doing homework and loved watching Japanese anime. But at the age of 21, she gave up her British citizenship and postponed her studies to run for elections. Ray Wong, 22, has made peace with sacrificing himself for the cause. A masked protestor declares, “Safety is not my concern”—he estimates he has been tear-gassed at least 50 times. Shiu Ka-chun breaks down while discussing the support system he is setting up for his aged mother lest he is sent to prison. Chan Kin-man talks about how he sleeps without an AC or mattress to prepare for life in jail. The film’s engagement with these individuals makes it especially endearing—it gives a face to the hordes on the streets, each wrestling with their ideals, passions and tribulations.

We Have Boots also chronicles how protestors increasingly resort to violence as institutional channels are blocked—four pro-democracy legislators were disqualified merely for modifying their oaths during the swearing-in ceremony. At the beginning of the film, there are references to Martin Luther King’s strategy of non-violent resistance and Gandhi’s civil disobedience against the colonial government. But later, we see the violence perpetrated by protestors, culminating in the burning of a 57-year-old man opposing the vandalism of public transport. But the film—and some activists—refuse to condemn or condone the act despite acknowledging its heinousness.

It does not, however, refrain from highlighting the dissensions within the movement. We see how the more radical protestors accuse the Occupy Central with Love and Peace leaders of behaving with the same authoritarianism they are opposing as well as their debates regarding strategies to adopt. It also grounds the reasons for the opposition to China. They have a problem with the high-speed rail link to Hong Kong, resulting in the mainland Chinese overwhelming the city and its unique identity, the “loss of manners” and public civility. A bizarre outcome of this is ‘baby formula tourism’, where mainland Chinese parents suspicious of the quality of baby food throng Hong Kong to stock up, resulting in shortages. Meanwhile, rising inequality, overcrowding and lack of housing remain significant problems. “Our generation does not expect to have money or children,” says one of the young activists.

Evans Chan is known for his experimental filmmaking, but We Have Boots has few stylistic flourishes. Instead, it relies on interviews, recordings of protest meetings, press conferences and extensive visuals of the cityscape and protests—on-ground footage, sweeping drone panoramas, tracking shots—to meticulously paint a portrait of Hong Kong’s struggle for democracy. It may not have all the answers, but it intrigues with its skillful exploration of pressing questions: What is it like to live under an oppressive regime? How do we confront authoritarianism? And most importantly, what next for the people of Hong Kong?

We Have Boots world-premiered at the International Film Festival Rotterdam 2020. It was part of the festival’s Ordinary Heroes: Made in Hong Kong series, which featured films—old and new—capturing the social dynamics and political trajectory of the “most cinematic city in the world”.