'We Have Nothing To Do With It': BJP On Ragini Dwivedi Drug Racket Case

'We disown Ragini Dwivedi. Hundreds of celebrities from different walks of life campaigned for the BJP 'voluntarily' during the 2019 bye-elections. Ragini Dwivedi may have been one among them,' BJP spokesperson Captain Ganesh Karnik in a statement. 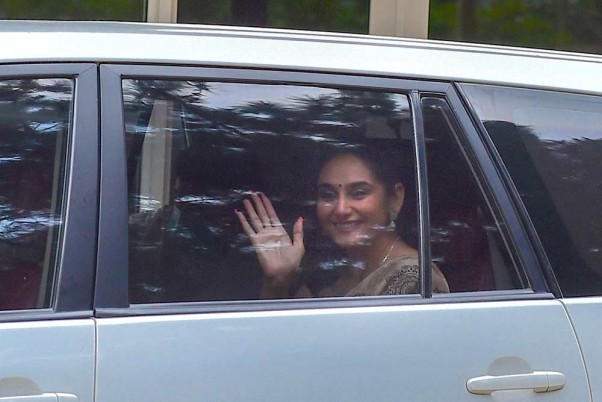 The Bharatiya Janata Party in Karnataka on Sunday said Kannada actress Ragini Dwivedi, arrested in a drug case, was never a member of the party and may have campaigned for it in the 2019 Assembly by-elections on her own.

Seeking to distance itself from the actress a day after her arrest, the BJP said it was against any sort of, or any form of anti-social activity by anybody.

"We disown Ragini Dwivedi. Hundreds of celebrities from different walks of life campaigned for the BJP 'voluntarily' during the 2019 bye-elections. Ragini Dwivedi may have been one among them," BJP spokesperson Captain Ganesh Karnik in a statement.

Who Is Ragini Dwivedi Held In Drug Bust?

He clarified that Dwivedi was neither a member of the BJP nor the BJP had assigned her the responsibility of electioneering.

Stating that Dwivedi may have been involved in the campaign 'on her own', Karnik said the party is neither accountable nor answerable for Ragini Dwivedi's activities in
her personal and professional life.

"We have nothing to do with it and we maintain distance from it," he added.

According to him, the BJP is totally against any sort of, any form of anti-social activity by anybody.

"We will neither encourage nor support such activities. Hence, we disown Ragini Dwivedi for her involvement in the drug racket," he said.

The actress was arrested on Friday after intense interrogation for many hours.

She is among the 13 people booked so far in connection with drug abuse in the Kannada film industry.

Dwivedi along with others has been charged with supplying drugs in rave parties through drug peddlers.