'We Owe You Money, Not Respect': Hit By Shutdown, Kashmir Trade Bodies Allege Harassment By Banks

'We...are aware of the fact that we have to repay the banks but all we want is that we pay with respect and honour,' the trade bodies said. 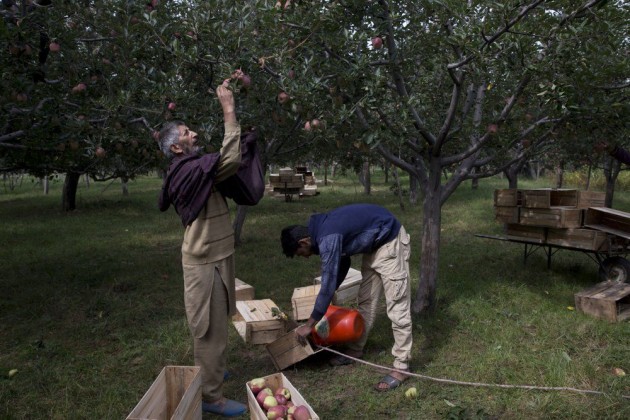 Several newspapers in Kashmir on Friday published a full-page advertisement with a bold heading: “We owe you money, not respect and honour.” The unusual advertisement was published on behalf of 22 Kashmiri trade bodies who allege they are being threatened by banks and called 'defaulters'.

The trade bodies also alleged that the banks are threatening them with asset posession. They asked the  banks to be hunble and compassionate while making recoveries.

In the advertisement, the trade bodies, including Kashmir Chambers of Commerce and Industry (KCCI) and Kashmir Traders and Manufacturers Federation, said that after August 2019, business community was completely devastated and exhausted.

24 Hours In Life Of Mushtaq Ahmad Malik: Battling To Resurrect The Apple Of His Labour

They further said: “We as respectable and responsible community are aware of the fact that we have to repay the banks but all we want is that we will pay with respect and honour.” 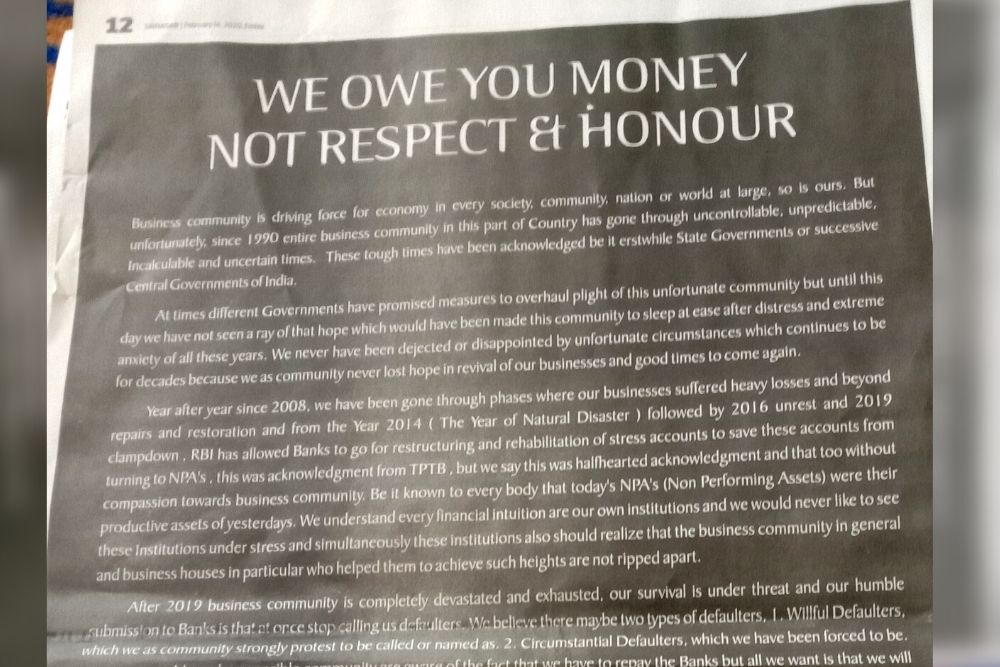 The lockdown that began in the erstwhile state of J&K after August 5 cost Kashmir more than Rs 10,000 crore. Sectors directly dependent on the internet such as e-commerce are the worst-hit.

The KCCI in its 'Economic Loss Assessment Report', released in Decenber last year, said Kashmir’s economy has suffered a loss of Rs 17,878.18 crore since August 5 last year when the Centre abrogated Article 370 and imposed severe restriction in the erstwhile state.

The report also stated that the "present disruption" has resulted in loss of jobs to lakhs, borrowers of financial institutional have lost their capacity to fulfill their commitments and a substantial number of accounts are likely to turn bankrupt, many business establishments have closed down or are contemplating closure.

“The sectors directly dependent on internet, like information technology and e-commerce, have been ruined. The government intervention in the horticulture sector for which Rs 8,000 Crores were earmarked for purchase of apples has come a cropper and caused price turmoil and panic sales," the KCCI report said.

The trade bodies said that year after year since 2008, Kashmir's economy has been taking a serious hit that is beyond repair.

A businessman said that one of the “circumstantial defaulter” was "horribly harassed" in Jammu and Kashmir's Ganderbal district.

“Bank officials, escorted by the police, barged into his residence and told his wife to take utensils as she might require them later. This is horrible,” he said.