We Welcome Mann’s Decision But Will Not Accept Any Committee: Protesting Farmers

The protesting farmers have expressed their apprehension that the new laws would pave the way for eliminating the safety cushion of the MSP. 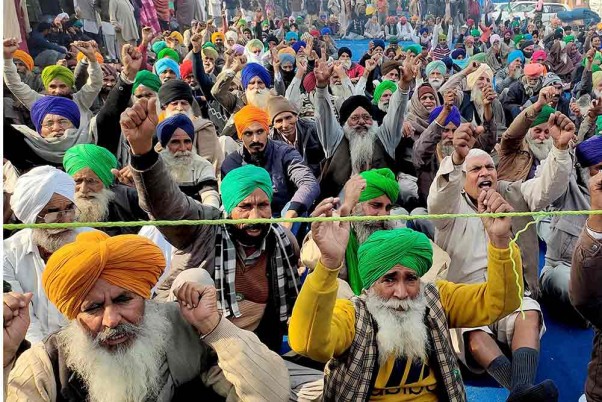 The decision of Bharatiya Kisan Union president Bhupinder Singh Mann's decision to recuse himself from a Supreme Court-appointed committee on Thursday was welcomed by the protesting farmer unions, but the farmers also said that they do not want any panel and will not settle for anything less than the repeal of the three contentious farm laws.

They said the other three members of the committee should follow suit as the protesting farmer unions had never demanded the formation of any committee to resolve the impasse between farmers and the Centre over the new farm laws.

Mann said he is thankful to the apex court for nominating him on the panel but would give up any position to prevent farmers’ interests from being compromised.

Farmer unions and opposition parties had raised doubts over the composition of the panel, insisting that its members have been in favour of the three laws in the past.

"Mann's decision is a good step as there is no importance of any committee for farmer unions as it has not been our demand. Mann knew that no farmer union would appear before the court-appointed committee that's why he has taken this decision," farmer leader Gurnam Singh Chaduni told PTI.

Chaduni is a senior member of the Sankyukt Kisan Moarch -- an umbrella body of around 40 protesting unions. He said that farmer leaders will not appear before the committee even if the rest three members also recuse themselves and new members are appointed.

He asserted that farmers will not settle for anything less than the repeal of new agriculture laws.

Another farmer leader, Abhimanyu Kohar, said that government knows that the court cannot repeal the laws and that it should stop playing with the sentiments of farmers who have been camping at several Delhi borders since November 28.

"This is a good thing that Mann has recused himself from the committee. Forming a committee is not a solution. The new farm laws have been enacted by Parliament and the court cannot do much. The government knows this that's why we are asking the government to repeal these three laws," Kohar said.

Asked whether union leaders would attend the next round of talks with the government scheduled for Friday, he said that they are not against any dialogue and that they will hold talks with Union ministers.

Sukhdev Singh, Punjab general secretary of BKU Ekta Ugrahan, said that they will accept any committee only if the government repeals the three farm laws first.

Farmer leader Harinder Singh Lakhowal also said that they will not call off their protest until the government repeals these laws and gives a legal guarantee on minimum support price for their crops.

Earlier this week, the Supreme Court stayed the implementation of the three central laws till further orders and announced the formation of the committee to hear the grievances of the farmers and the opinion of the government.

Thousands of farmers, mostly from Punjab and Haryana, have been camping at several Delhi border points, demanding a complete repeal of the three farm laws and legal guarantee of minimum support price for their crops.

Enacted in September last year, the three laws have been projected by the Centre as major reforms in the agriculture sector that will remove middlemen and allow farmers to sell their produce anywhere in the country.

However, the protesting farmers have expressed their apprehension that the new laws would pave the way for eliminating the safety cushion of the MSP and do away with the "mandi" (wholesale market) system, leaving them at the mercy of big corporates.