There is no difference between Congress and BJP. They will join BJP if they win the election. 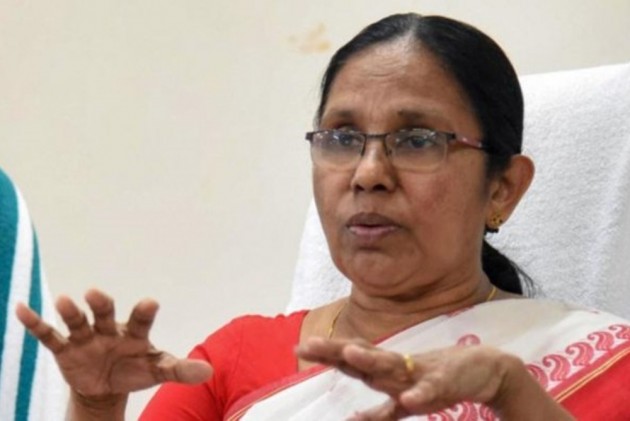 Kerala health minister KK Shailaja speaks to Outlook about why the state is still at the forefront of tackling coronavirus and how she juggles the role of a minister and the star campaigner of the ruling Left Democratic Front (LDF). Shailaja, who earned global recognition for the Kerala Model of combating Covid-19, says that the BJP and Congress are alike and the CPM will fight hard to protect the secular character of the country.

Q) You are now donning multiple roles as health minister, star campaigner, and a candidate from the Mattannur constituency. How do you manage an election amidst the pandemic?

It’s adventurous to conduct an election during a pandemic. But we are vigilant and the health department is meticulously monitoring the situation. Kerala managed to contain the virus successfully in the past year. Kerala is still number one in terms of conducting tests among symptomatic people. Our fatality rate still is 0.4 per cent, which is one of the lowest in the world. We are always prepared to tackle a surge. Today, our health care system is well equipped to handle even 40,000 cases per day. We are still following the slogan – trace, quarantine, test, isolate and treat. We are still regularly reporting positive cases and deaths. No other state is doing it. Recently, the Union health ministry appreciated Kerala’s efforts in vaccination and how we tackled the virus in a scientific method. It was a collective effort and I would give full credit to my team.

Who Is In The Driver’s Seat? Kerala’s BJP Unit Or Central Leadership?

Q) Kerala never had a woman chief minister. Don’t you think it’s time parties give chance to woman CM? Your name also came up from some quarters for consideration for the CM post.

Some people have been suggesting my name for the CM post to create confusion. I believe that Pinarayi Vijayan is the best choice for CM and it’s not the right time to think about anyone else. He is an able administrator and steered us through many crisis situations. The CM guided us with clarity and innovative ideas in the face of adversities. In such a scenario, I don’t think people will think of another CM.

Q ) Women still have a skewed representation in politics. Even the CPI (M) has given only 12 seats to women in this election. Do you think it is adequate?

I feel that there should be more representation for women in politics. However, the CPI (M) has fielded the most number of women compared to other political parties. Our party is also of the opinion that there should be more representation given to women. It’s a fact that while candidates are decided at the district levels, women lose out because factors such as winnability take precedence. I hope it will be addressed in the future.

Q) Women's entry to Sabarimala has again made a comeback with Congress and BJP raking it up as the main plank. Does it hurt the LDF?

The Sabarimala issue is not going to have any impact anymore. It’s a non-issue and our focus is more on development and welfare programmes. We allowed women entry as per the Supreme Court order. We couldn’t stop women who came with the SC order. We never hurt devotees’ sentiments or try to impose anything. It is the personal choice of an individual whether they want to go to a temple or not. Earlier, the Communist parties led the temple entry movement for the lower caste. Now anyone can go to any temple and worship there. It’s up to the devotees to decide.

Q) The LDF slogan is “For sure, it’s LDF”. Why should the LDF return to power a second time?

We have done immense work in the field of health, education, housing, infrastructure among others.  Under the Life mission, the government built three lakh free houses for the poor and construction of another three lakh is underway. The world is watching us and learning from us. Still, the opposition thinks that it's PR work. Kerala’s health sector has registered phenomenal growth in the last five years. Even taluk hospitals have gone hi-tech.  We are in the middle of completing many projects and if we don’t return to power, all the work will be stalled.

Q) Congress says that CPM has secret ties with BJP.

It’s a ridiculous allegation that we are in cohorts with the BJP. The Communist parties have always fought against communal and divisive forces. The struggle is still continuing. That’s why the BJP is dead against us. We are trying to secure the secular fabric of the country. The Left parties have built a secular wall in Kerala against the BJP’s communal agenda. We won’t let anyone tear that apart. We have to protect this safe wall. There is no difference between Congress and BJP. They will join BJP if they win the election. The BJP is employing the British strategy of divide and rule.

Q) Do you think Rahul Gandhi’s campaigning will be a boost for Congress?

There is no wave for Rahul Gandhi here. In the 2019 Parliament election, people fell for the campaign that Congress will get power and Rahul will be the PM. Now people have realized that Congress is nowhere in the picture anywhere.

Q) The Opposition claim that though Kerala contained the pandemic in the beginning, it lost the battle later.

We have always worked in a systematic and organised manner. The misinformation campaign by the opposition is appalling. Instead of co-operating with us in fighting the pandemic, the opposition parties have only tried to create trouble by raising unnecessary allegations. They never cared about the hardship of people.

When the pandemic hit us, we had only two options. Either allow the pandemic to stay its course or contain it through scientific methods. We went for the second method of delaying the peak. The countries such as the US and Sweden, which adopted the first method have admitted later that it was a wrong step. Kerala adopted the second method because of the high-density population and a large number of elderly people. Besides ramping up the health system capacity, we also adopted reverse quarantine, panchayat, ward level, and house to house campaigning and screening to curb the virus. We managed to maintain our fatality rate at 0.4 per cent from the beginning. Thousands have died in Maharashtra and Tamil Nadu during the peak.

Though our fatality rate slightly went up after the relaxing of lockdown, we adopted stringent measures. We never had an early celebration, as some of our critics say. Kerala is still at the forefront of controlling the virus.