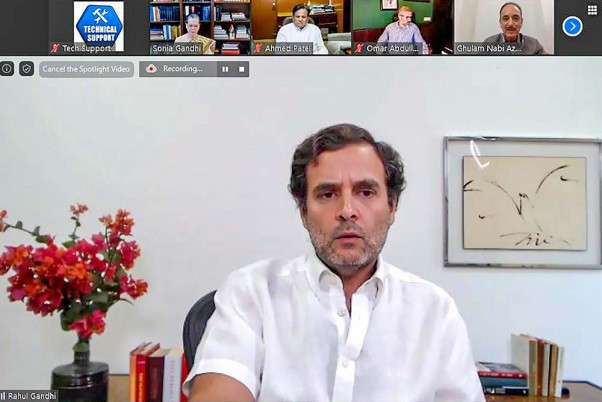 Congress leader Rahul Gandhi on Tuesday caused a stir after he said that his party is not the "key decision-maker" in Maharashtra where it is part of a coalition government led by Shiv Sena chief Uddhav Thackeray.

The Congress leader said that the Congress party, a constituent which of Maha Vikas Aghadi (MVA), only supports the state government.

Also Read: Will Carry Luggage Of 15 Labourers If They Allow Me: Rahul On FM's 'Dramebaaz' Dig

The MVA consists of Shiv Sena, NCP and Congress. Shiv Sena MP Sanjay Raut on Tuesday slammed the opposition and said that the coalition government in Maharashtra is strong and rejected any possibility of the president's rule in the state.

However, he saidt here was nothing to worry about the survival of the government, as the "ruling dispensation is stable and functioning properly."

Thorat was asked why no Congress leader is seen around CM Thackeray or NCP chief Sharad Pawar, he said, "We are in touch with each other over phones. Nothing should be read into such appearances or disappearances".

Maharashtra continues to be the worst-affected state due to Covid-19 with 52,667 reported cases and 1,695 deaths, according to the Ministry of Health and Family Welfare.

The opposition in the state have been attacking the state government saying it failed to contain the spread of the deadly virus.

Meanwhile, NCP leader Sanjay Raut, in a tweet said that "Corona's vaccine and the dose of toppling the Thackeray government by the Opposition is yet to be found."

"It would be right for the opposition to quarantine immediately," he added.