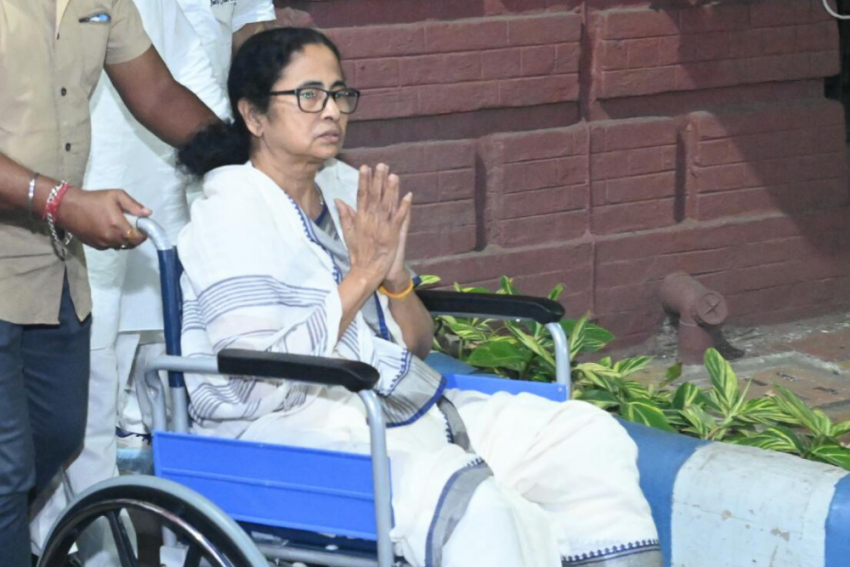 A purported video where West Bengal Chief Minister Mamata Banerjee is seen moving her fractured leg back and forth has gone viral on social media, giving her opponents the opportunity to claim that she is faking her injury to win votes through sympathy.

Claiming that its rival BJP should learn how to respect women, the TMC condemned the "manner in which the party supremo has been insulted".

What kind of a fracture is this @MamataOfficial? pic.twitter.com/bHdUyrvcug

PTI could not independently verify the authenticity of the video.

BJP spokesperson Pronoy Roy, who shared the 30-second clip on Facebook, said Banerjee should "stop putting up a drama over her injuries" to garner public support in the midst of the assembly elections.

"This video grab which has surfaced on networking websites has not been filmed by anybody from the BJP. It was recorded by some TMC party workers. We want her to get back to normal life soon, we also pray for that... but she must stop putting up this drama by moving around in a wheelchair.

"If she was exercising her leg by shaking it then I suggest that she start walking as that will help her recuperate faster."

Taking a jibe at the chief minister, Rahul Sinha, a senior leader of the saffron party, said the TMC supremo's bandage will not buy her votes.

"The more she is losing confidence the bigger her bandage gets. People are not buying this... She must have forgotten which leg is injured and shook the wrong foot. She has already lost the elections, the bandage won't be able to save her from imminent defeat," Sinha said.

Taking strong exception to the remarks made by BJP leaders, state minister Shashi Panja said the saffron camp, by raising suspicion over Banerjee's injuries has not just insulted her but all the women of Bengal.

"We condemn the manner the BJP is insulting our beloved CM. They are not just insulting our CM, but also the other women of the state. We urge them to show proper respect to the women of this state," Panja said.

Echoing her, former BJP leader Yashwant Sinha, who joined the TMC recently, said if anybody was churning out lies, it was the BJP and not the TMC.

"Are they (BJP leaders) trying to say that a whole lot of people involved (in treating her) including eminent doctors are lying? It's only the BJP that is capable of speaking such lies. I've no doubt in my mind that they are the ones behind this (propaganda)," Sinha, who had served as the finance minister in the Atal Bihari Vajpayee cabinet, stated.

TMC spokesperson Kunal Ghosh also hit out at the BJP and said that the people of Bengal will give the BJP a befitting reply for its "dirty politics".

"If they (BJP leaders) are spending so much time staring at Didi's feet, they might as well fall on her feet. We condemn such politics that targets a woman who is holding campaigns sitting on a wheelchair, after being attacked. This shows that the BJP has lost its plot," Ghosh said.

Banerjee sustained injuries on her left leg, waist, shoulder and neck as she fell down after allegedly being pushed by miscreants in Nandigram on March 10.