Veteran TMC leader Amit Mitra, who has been handling the state exchequer since 2011, will have to step down as he didn’t contest the election this time. 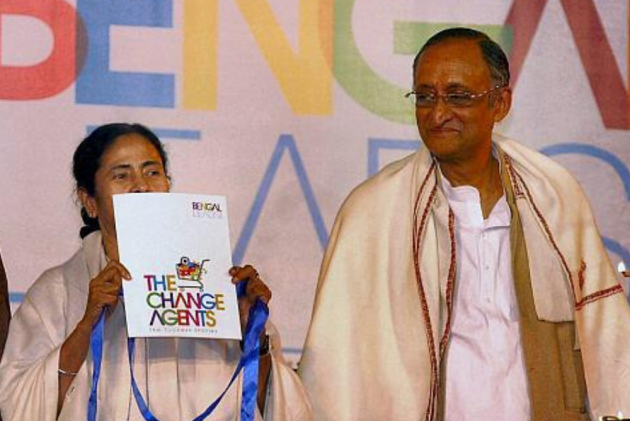 The Mamata Banerjee government in West Bengal is likely to see a new finance minister taking charge, as the present minister Amit Mitra’s six-month tenure as a non-elected minister ends on Tuesday. He was sworn in on May 10, five days after Banerjee took oath as the chief minister for her third consecutive term.

However, in all likelihood, the chief minister will appoint Mitra on some advisory role in the finance department as she heavily depends on him in managing the state exchequer. This is why there are speculations that Banerjee might keep the department to herself and allow Mitra to do the job as advisor to the minister.

The 73-year-old former secretary-general of the Federation of Indian Chambers of Commerce and Industry (FICCI) has been serving as the finance minister since the Trinamool Congress (TMC) government came to power in 2011.

Due to several age-related ailments, Mitra did not contest the assembly elections held in March-April this year. After returning to power, Banerjee, who depends significantly on Mitra for managing the state exchequer, asked him to continue.

Unlike chief minister Mamata Banerjee who too had taken oath as a non-MLA chief minister but later got elected in a bypoll, Mitra did not contest any by-election. He had informed his party that his health would not allow him to campaign for any election.

“Multiple changes in the government are expected on Tuesday. Not only will the government have to entrust someone else with the finance ministry, it also has to find a replacement for another veteran Subrata Mukherjee,” said a Bengal minister who did not want to be quoted.

Mukheree, 75, died on Thursday. He served as the panchayat and rural development minister from 2011.

Finance and panchayat and rural development have been one of the most important departments in her government and she never changed the minister concerned since 2011.

Mitra has been handling the massive task of controlling the state’s debt-GSDP (gross state domestic product) ratio amid the government’s relatively high share of social welfare expenditure in the backdrop of the absence of any new big industrial project during the last 10 years.

The TMC government considers Mitra’s performance as commendable, as despite a huge increase in social sector expenditure during the Mamata Banerjee regime compared to the erstwhile Left Front government, the state’s debt-GSDP ratio came down from its historic peak at 41.9 percent in 2010-11 to 34.75 percent in 2018-19, according to the state’s budget reports.

In the state’s total expenditure, the share of spending in social welfare sector – which includes education, sports, art and culture, health and family welfare, water supply, sanitation, housing, and the welfare of labours and the backward classes – increased from 9.8 percent in 2010-11 to 19.42 per cent in 2018-19.

However, political and economic observers did not have much praise on offer for him.

“Mitra has played a role in increasing state revenue but I do not consider him to have played any exceptional role. First, he failed to check the growth of chit funds at the beginning of the TMC regime until the chit fund bubble burst on its own. Second, despite having been a prominent FICCI personality for a long time, he failed to build trust among the industrial sector on investing in Bengal,” said Udayan Bandyopadhyay, who teaches political science at Bangabasi College in Kolkata.

Left economist Prasenjit Bose, however, feels Mitra’s achievements were much more modest than his “hyperbolic and exaggerated claims, unsubstantiated by data.”

Bose said, “The state’s GSDP figures were inflated which artificially improved the debt-GSDP. There has been little improvement in the state’s own tax revenue mobilisation. Social sector spending has increased largely due to enhanced devolution of the state’s share in central taxes following the fourteenth finance commission’s recommendations".

Mitra, who holds a PhD in economics from the Duke University in the US, comes from a family of freedom fighters, including his father, Haridas Mitra and mother, Bela, who also was a niece of ‘Netaji' Subhas Chandra Bose.

Both Haridas and Bela were part of Bose’s Indian National Army and the former was also sentenced to death by the British administration, though later commuted. Later, he was elected to the state Assembly in 1957 as a Praja Socialist Party member, in 1967 as a Bangla Congress member and in 1972 as a Congress member.