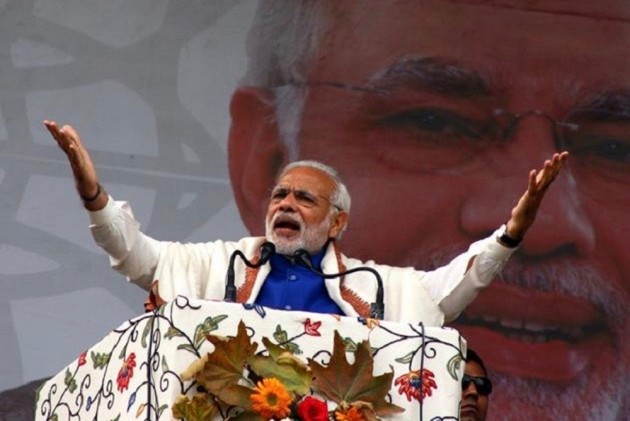 The Bharatiya Janata Party not only repeated its 2014 performance in Jammu and Kashmir by winning three parliamentary seats--two from Jammu and the Ladakh seat-- but the saffron party also improved its vote share in the sensitive border state.

The Muslim-dominated Kashmir region of the state is cagey after the election results as it carries two distinct messages: Prime Minister Narendra Modi’s Kashmir policy--which some believe is “muscular” while others call "realistic”--is unlikely to change, and that the BJP would be an important player in state politics, as it has been since 2014. The party leads in 28 out of 41 assembly seats in these three parliamentary constituencies.

Modi's Kashmir policy
There has been a major shift in Central government’s approach towards the violence-torn Kashmir valley between 2014-19 to an extent that it was a marked departure from previous Central governments. Narendra Modi government didn’t create a sense of ambiguity with phrases like “Sky is the limit”--coined by late PM PV Narasimha Rao with regard to J&K’s autonomy--or late PM AB Vajpayee’s famous quote “Insaaniyat ke daire mein”.

The PM has, in fact, never even mentioned any separatist leader by name and, on the contrary, stressed that the problem of terrorism in the state is limited to two-and-half-districts in the Valley. His approach, many believe, was akin to taking the bull by the horns. He attempted to bring down decades-old Kashmir narrative of not disturbing internal political equation and be seemingly “soft” on separatism in the Valley.

On the flipside, this approach hardened the “anti-India” and “separatist” emotion and feeling in the Valley which advertently or inadvertently gravitated toward radicalism, political or otherwise.

The BJP pulled out of the coalition government with PDP, bringing the Muslim majority state under the direct control of the Union government, and allowed security forces a free hand in dealing with militants.

Looking through right-wing or "nationalistic” prism, the strategy appears to be working, at least for the PM and his party. Modi-led BJP drew a clear line on Kashmir: no to separatism, root out terrorism and accept “Indian nationalism”.

Modi has consistently said “Vikas” (development)is key to Kashmir’s development. In his address to NDA MPs in the Central Hall of parliament, he added another caveat "Vishwas" (trust) to his broad "Sabka Sath Sabka Vikas" slogan. Translating it into a ground reality in Kashmir is the biggest challenge that the state has for Modi 2.0.

Nationalism, Sub-nationalism and Hindu nationalism
The most important task before Modi is to make people in Kashmir accept his party’s lines without causing alienation. He has to make them feel that they are an equal and inalienable part of India not just in a geographical manner, but in spirit too. Modi will have to reassure the Kashmiris that BJP is not anti-thesis to Kashmiris and that rather a synthesis has to be evolved.

The BJP's massive victory also broadly and clearly spells out the national mood where “sub-nationalism” will have to go, and it will not be accepted in the matrix of “nationalism”.

Modi 2.0's challenge would be to make people in Kashmir understand and accept this hard reality in a gradual and incremental manner than my way or the highway approach.

J&K is the only state where Hindus- dominant in the Jammu region- are in minority. The sense of "subjugation” here also means being “controlled” by Muslims, which constitute about 65% population of the state.

BJP’s victory is also being interpreted as the resurgence of “Hindu nationalism” and holds huge significance for Jammu Hindus. While Modi would like to ensure that Jammu has a role and control over the levers of power in the state, it will also have to put in a balancing act so that it doesn’t over-push the leeway allowed by its numerical strength, translating into a sense of “subjugation” among Muslims of the state.

"Whatever has happened in the last five-year. Now, Modi has to bring change in working by taking along all the communities and people of J&K, even though didn't give all six seats, hope he (Modi) will thing better for the state," said former CM and National Conference working president Omar Abdullah after the result.

The BJP would be keen to see the change desired by Omar reciprocated from the other side too. Indian political ecosystem has changed for sure. How much assimilative it evolves, how much it influences the reality of Kashmiris, and how much the sense of "subjugation" is nursed by Jammu, will define Modi 2.0 for Jammu and Kashmir.