'Keep the technology simple; freeze the mission profile and don't change it till the last moment.' 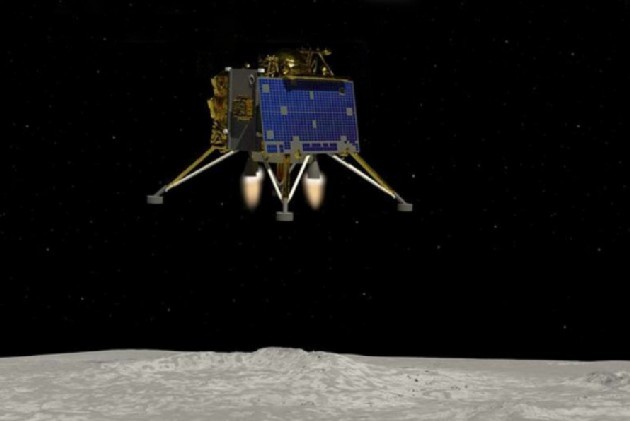 Keep the technology simple; freeze the mission profile and don't change it till the last moment; carry out the simulation tests to the maximum possible level -- these are some of the learnings from the crash landing of India's moon lander Vikram, said a former official of the Indian Space Research Organisation (ISRO).

The official, speaking on the conditions of anonymity, told IANS: "Space technology itself is complicated and one should not add more complications to it as it had happened with the lander Vikram. For instance, the four throttleable engines to work in unison is a technical challenge. Then there is the fifth engine at the centre."

Early on September 7, Vikram, while on its descent to soft land on the Moon's south polar region, apparently lost control and crash landed there, snapping communication links.

According to the former official, had it been known earlier that the GSLV-Mk III (Geosynchronous Satellite Launch Vehicle) rocket was available for the mission, the spacecraft could have been designed with a powerful single engine, and not with five engines.

"Ideally a moon lander of this kind should have a single 3,500 Newton (N) engine. This would have obviated the complexities of managing the four throttleable engines working in union. Other nations had used a powerful single engine while landing their crafts on the moon. Before the touchdown on the lunar surface, the single engine would be cut off and the lander would have made a soft landing," he said.

According to him, the mission profile underwent changes from the original plan.

"Originally the plan was to launch the Chandrayaan-2 spacecraft along with the lander using GSLV-Mk II that can carry a weight of two tonne," he said.

Later on, the fifth engine at the centre of the lander was added so as to prevent the dust from the Moon surface from flying up and damaging the lander while it was landing, he added.

"This in turn increased the spacecraft's weight and changed the other specifications that GSLV-Mk II was not capable of carrying. It was then decided to launch Chandrayaan-2 with higher capacity GSLV-Mk III," he added.

"After the fifth engine was introduced, there was a software change. How well it was tested is not known," he said.

"The ISRO has to simulate various things and scenarios with the data on hand. It should also check and simulate what were the actions that were not done and the results that they had assumed," another retired official, who preferred to remain anonymous, told IANS.

According to him, ISRO has to see whether any simulation prior to the launch was overlooked or waived any known deviation.

"ISRO should also check out the extent to which various failure modes were simulated. ISRO has to go into these details. It would take considerable time to arrive at a conclusion," he added.

Space experts said that normally any data loss from a satellite means it suddenly changed its altitude. The loss of communication link means the target/satellite experienced a large angular rotation.

According to them, the loss of communication link could also be due to wrong input being loaded on to the lander.

In other words, the loss of communication link with Vikram could be due to sudden disturbances -- in the form of engine propulsion or wrong data input, experts said.

The Vikram was designed to land on the lunar surface on its four legs at a speed of about 7 km per hour. But owing to some complications towards the end, the Vikram seems to have hit the Moon's surface at a speed several times more than that.

"The Vikram's maximum tolerance landing level was 5 metres per second. But it seems during its final moments the landing speed was very high," the retired official added.

According to him, some of the abnormal conditions that Vikram could have undergone seems to be not simulated before the mission, like the speed increase during the final moments when it should be cut down.

Normally when there is a problem when a satellite orbit is changed, the firing of the onboard motors would be stopped and the operations would restart the next day.

"In the case of Vikram's landing what was its point of no return -the point where its descent cannot be stopped or changed or what was the lowest or nearest point from the lunar surface that the lander could have been manipulated is not known," he said.

According to him, there should be Plan B if something goes wrong with Vikram and whether it was activated is also not known.

Former ISRO officials said the Indian space agency would have got various engineering data from this mission which will be useful for the future course of action.

On July 22, the Rs 978 crore Chandrayaan-2 was launched into space by India's heavy-lift rocket GSLV-Mk III in a textbook style.

After five earth-bound orbit raising activities, Chandrayaan-2 was inserted into the lunar orbit. On September 2, Vikram separated from the orbiter.