The documentary and the book '1232 KMS' by Vinod Kapri captures an incredible journey of great fortitude against all odds. 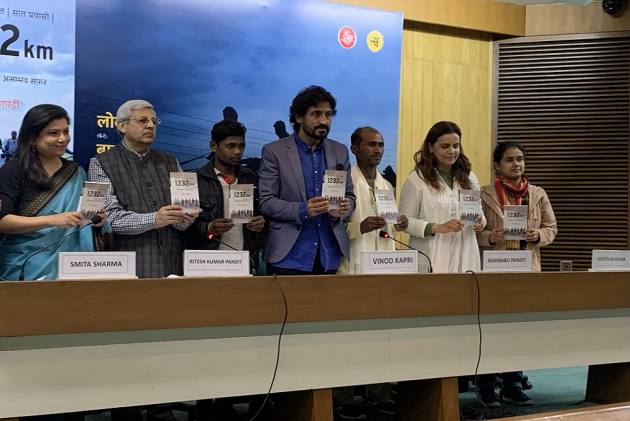 What happens when a group of labourers forced to cycle over a 1000 km at the peak of pandemic is accompanied by a documentary filmmaker? The documentary and the book '1232 KMS' by Vinod Kapri captures an incredible journey of great fortitude against all odds. Speaking at an event on Saturday about the journey, Kapri said, "the one apprehension that was going through my mind all the time when we were covering this huge distance, was what if someone fell gravely ill? Or worse, what if someone died? I felt I'd never be able to forgive myself."

Soon after the first nationwide lockdown was imposed in the country, on March 24, 2020, a tweet set the ball rolling for Kapri. "I was tagged in an SOS tweet by someone who was talking about a group of 30 labourers being stuck in Ghaziabad. I called them and arranged for their provisions for a few days," Kapri said, talking about the book. After a few days Kapri was told by one of the labourers that they were leaving for their hometown in Bihar.

Kapri Googled the distance from Delhi to their hometown, the journey was going to be 1232 km long. That's when Kapri decided to join them.

"We could tell at that point in time that this large-scale migration - of migrant labourers from 20-22 cities of the country - was the largest migration of people in the country after partition. That's why I felt a need to document, to capture it," Kapri said.

"I had set a few rules for myself - one that I was going to live as they did, second that we were not going to do any retakes and third that I was going to help them as much as possible even at the cost of compromising the documentary. That's what we stuck with throughout the seven days and seven nights we spent together," Kapri said at an event held in the capital on Saturday.

The journey was fraught not just with risks and raw, emotional moments, it was also full of some light-hearted humour as well.

"There was a moment near Shahbad when I was in a car waiting almost two and a half kms away from them. I had sped slightly ahead to arrange food for them. When they did not reach in time, I got worried for them and drove back to find them in the dark," Kapri said. When he found all of them safe and sound lying by the road, he asked them the reason for the delay. "I was told that one of the labourers had felt an uncontrollable urge to answer the call of nature. They were waiting for him to finish," the crowd burst laughing with Kapri.

Two of the labourers, Rambabu Pandit and Ritesh Kumar Pandit, who were part of the journey were also present at the event. In response to a question about why they had decided to leave instead of waiting for the government to help them out, Rambabu said, “All through our journey we found that instead of helping us, the government had set policemen behind us, they were caging us in dirty quarters in the name of quarantining us. Except a few individuals and institutions such as Gurudwaras, no one bothered about us. That’s why we were sceptical about the government’s claims.”