The Congress had accused the Chief Minister for adopting luxuries for his travels despite the state government having a financial crunch and a debt burden of Rs 60,000 cr on the state’s head. 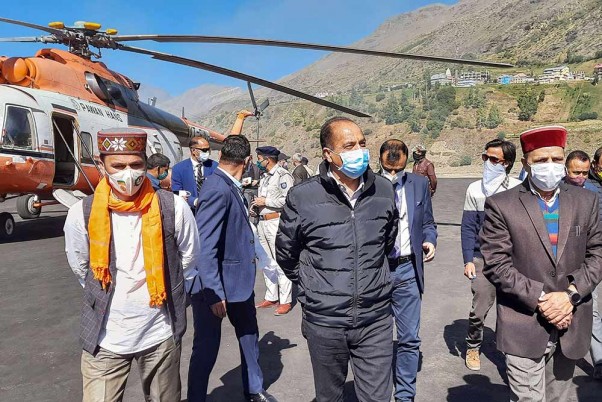 The 171 A2 Russian–made helicopter turned saviour for helpless tourists, including a pregnant woman and a few children stranded in high altitude Pattan valley of Lahaul Spiti, a tribal district in Himachal Pradesh.

The 26-seater had arrived in Himachal Pradesh only last week and the Chief Minister deputed it for emergency rescue for the flash-flood, cloud burst-hit areas of the state.

“The Congress had made such a hue and cry over our decision to hire new helicopter, after expiry of the lease with the earlier service provider .Look how important it is for the state to maintain a helicopter, not only for the VIPs to cut short distances and time, but also save lives,” Chief Minister Jai Ram Thakur said in Shimla.

More than 190 persons were rescued from the flood prone Pattan valley of Lahaul-Spiti where 10 persons have lost their lives, and half a dozen still missing after the area was devastated by the incessant rains and a cloud burst- an unprecedented thing to happen in Lahaul-Spiti, where monsoon rains are rarest.

As the helicopter could not fly over 13059 feet high Rohtang pass, the local administrations with help of ITBP, police and fire brigade had undertaken a manual operation to save the lives of the tourists.

After distress videos of the tourists making appeals to save their lives, the administration used ladders, ropes and zip line and transported them to safer places. They had been struck in the valley since July 27.

Around 175 persons were evacuated from Jahlama, Thirot and Udaipur with ladders, ropes and zipline by the ITBP, police and fire brigade at Shansha and Jahlama nullahs and taken to Keylong

“As many as 19 persons, including a pregnant woman, were airlifted by the district administration and transported to Manali in an HRTC bus,”said Deputy Commissioner Neeraj Kumar .

Four bridges were also washed away, making it difficult for people at Udaipur to reach Keylong.

He said around 45 persons were also rescued from Jobrang, Lingar and Rawa villages.

When asked about new helicopter, Secretary General Administration Department (GAD) Divesh Kumar said, “The state government was in dire need for an advanced helicopter because of terrains and weather vulnerabilities in Himachal. We have not spent a single penny more than what the government was spending earlier with Pawan Hans and one more company.”

Initially, the helicopter will be able to fly 16 persons but gradually its capacity will get upgraded once mandatory trials are over.

The government will use the helicopter for VIP travels, emergencies, including medical emergencies and flights to the tribal areas.

The Chief Minister has been liberal in allowing helicopter use for the public purposes at times of emergency needs, Divesh Kumar says.

The Congress had accused the Chief Minister for adopting luxuries for his travels despite the state government having a financial crunch and a debt burden of Rs 60,000 cr on the state’s head.

In May 2021, the government had also sent helicopters for its use by ailing former Chief Minister Virbhadra Singh.