Away from the treasury benches, when the BJP was in the opposition for a decade till 2014, it was responsible for obstructionism too. 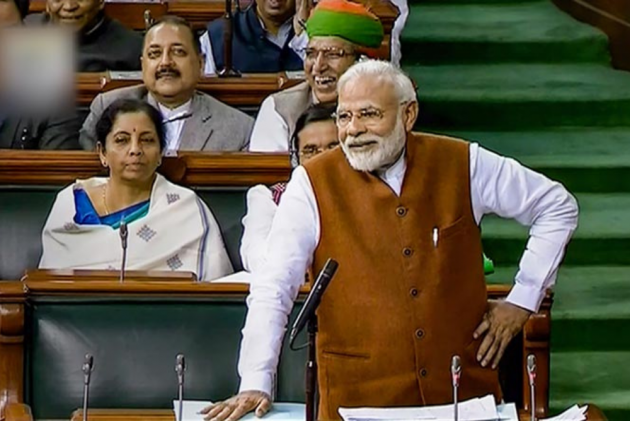 Prime Minister Narendra Modi has accused the Congress party of causing repeated disruptions and not allowing the Parliament to function properly. He said this while addressing a meeting of the BJP’s parliamentary party on July 27, and urged his party MPs to expose the Congress-led Opposition’s attempts to derail the government’s effort to discuss important issues.

However, away from the treasury benches, when the BJP was in the opposition for a decade till 2014, it was responsible for obstructionism too.

January 30, 2011 – Then Leader of Opposition in Rajya Sabha Arun Jaitley was quoted as saying in Ranchi – “Parliament’s job is to conduct discussions. But many a time, Parliament is used to ignore issues and in such situations, obstruction of Parliament is in the favour of democracy. Therefore parliamentary obstruction is not undemocratic.”

August 26, 2012 – Jaitley outside Parliament – “There are occasions when an obstruction in Parliament brings greater benefits to the country… Our strategy does not permit us to allow the government to use Parliament (for debate) without being held accountable… we do not want to give the government an escape route through debate.”

September 7, 2012 – About the frequent disruptions and a washed-out Monsoon session of Parliament, then leader of Opposition in Lok Sabha Sushma Swaraj had said – “Not allowing parliament to function is also a form of democracy, like any other form.”

She was reacting to Prime Minister Manmohan Singh's statement that the BJP's stalling of parliament was a “negation” of democracy. This was in the context of BJP’s charge of corruption against the UPA government in the coal blocks allocation case.

The same day, Jaitley too defended the disrupted session thus – “One session of Parliament has earlier been lost on account of corruption in allotment of 2G spectrum. That helped this country cleanse the telecom sector. Hopefully, the long-term gains of this session may enable future governments to clean up the process of allocation of natural resources.”

According to records of PRS Legislative Research, the productivity of the 15th Lok Sabha, that is 2009-2014 UPA-II, was the worst in the last 50 years. “The Parliament was disrupted frequently and witnessed a decline in time spent on legislation and oversight of the government. Disruptions over the allocation of 2G spectrum, coal blocks, FDI in retail, demand for Telangana, and the Commonwealth Games were the highlights of the 15th Lok Sabha,” according to the PRS.

“During the 15th Lok Sabha, frequent disruptions of Parliamentary proceedings have resulted in the Lok Sabha working for 61% and Rajya Sabha for 66% of its scheduled time,” the PRS report says.

Among other things, the sessions were marred by disruptions over demand for a Joint Parliamentary Committee (JPC) to examine the 2G Spectrum scam, CBI report on coal block allocation, India-China border dispute, the establishment of Lokpal, allegations of corruption in the railway ministry and the crimes against women, particularly Nirbhaya case in the Capital.

The BJP, arguably, deployed the strategy of disruption during UPA-II with a degree of success as it followed a spate of ministerial resignations including A. Raja, Dayanidhi Maran, Shashi Tharoor, P K Bansal and Ashwani Kumar.

September 2012, Sushma Swaraj --  “We had to stall Parliament to expose the government and its corruption. Anyway, it is the government's job to run the Parliament, not that of the opposition.”

July 27, 2021 – Congress deputy leader in Rajya Sabha – “It is not correct to say that we are being obstructionist. The Opposition is doing its duty and the Prime Minister is being undemocratic.”