No one can stop women when they wake up. No gun has the power to silence them, to prevent them from fighting for their rights. 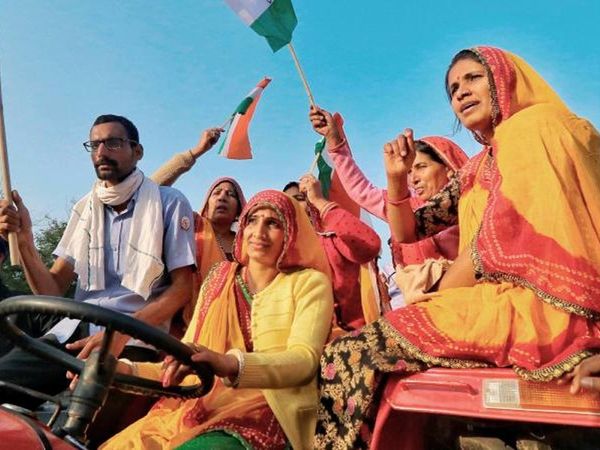 More stories from Nivedita
View All

I read this nazm by Majaaz just when I was beginning to read Urdu poetry. I did not know then that this nazm would go on to become a part of my very existence. In these 50 years I have seen so many veils turn into flags.

The first sweet, truly great moment in the history of humankind must have been the instant when women began to turn their veils into flags and protest against suppression, exploitation and inequality.

Let me begin with myself. From very early on in my journalism days, the road has been my constant companion. This bond, between me and the road, became deeper when I became involved in several movements against injustice. Although it did not happen overnight.

My political beliefs compelled me to stand up against inequality. It was my proximity to the Communist Party which gave me the insight and understanding of the class division and sectionalism in our society. I understood that power never tends to side with the underprivileged and the weak. I realised that the oppressed in our country could never get their basic human rights without fighting for them.

Bihar has been the land of social movements. The storms that began from here have uprooted the seat of power in New Delhi. There is a long history of social movements in Bihar. However, here I only want to mention the movements that were fought by women. I have seen women hit streets for their rights. I have seen their meek black silence glow into white cinders.

The battle for justice in the Muzaffarpur shelter home case was fought on the roads. The tragedy will always be remembered as a dark chapter in Bihar’s history. Orphaned and destitute girls were put through inhuman torture. They were pushed into the flesh trade. The girls there who had refused to be sold were killed and buried right there. Against all this, women took to the streets in the scorching sun. For several hours, traffic in the capital city was brought to a standstill.

We were fighting the battle together. I decided to fight the legal battle. I knew it wouldn't be easy. But we fought and won. I filed a case against the government and the CBI in the Supreme Court. The decision was announced in our favour. It was the victory of our movement. The movement that was born on the road.

God knows how many young girls still haven’t got justice. All I know is, movements led by women are never futile.

Take the instance of farmers who have been agitating for over a year now. What happened? After everything, the government had to bow down to them. I have seen this movement closely. I saw the women farmers from up close. I have pictures of them in my mind. I remember the days when I was among them.

It was just after the break of dawn. Light gusts of wind were blowing through empty roads. There were no trees in whose shadows people could hide. The noise of vehicles and trains had stopped a long time ago. In that stillness one could watch motes of dust crowding the rays of the rising sun, and settling on the roads where men and women were huddled together, in a huge crowd.

It was not easy to find out how many farmers had gathered on the Singhu border, despite the noise, despite innumerable footmarks. There was a crowd of women and children. Women of all ages were present.

These women were fighting for their lives, with placards, posters and books. Thousands of women had gathered under large awnings. I was looking at women who had left their homes and were there before me on the streets. To avoid the cold and strong winds, straw shelters had been put up and tents were built in some places, which had become the homes of these women.

I met one Harjit Kaur. The wrinkles on her face were clearly defined.

Amma, how old are you?

I don't know. There is no place for some lives in history. I was ten years old the year India got independence. You do the maths.

Why did you come here, Amma? Her eyes sparkled.

My grandson was coming here. I asked him why don’t you take me along. We also have to save our farms. We will not let the government sell the country.

Amma, the Supreme Court says that children and the elderly have to be separated from this movement.

Who are these people to offer us advice? We will stay here, till the anti-farmer bills are not withdrawn. We will die here, child, but we will not go back.

I was listening to her quivering voice and thinking that this was nothing short of the freedom movement.

Many women of Amma's age were fighting for their rights in the freezing cold. As evening approached, the rays of light floating in the sky above till not so long ago began disappearing. The rising winds seemed to be paying their tributes to these brave old women. Many couples hand in hand were raising slogans - we will fight, we will win. From afar one could hear faint beats of a drum to the tune of which someone was singing along. I am losing myself in wave after wave of sound.

I am lost. The songs ring in my ears long after they’ve stopped playing them. I know that this movement will not die a silent death. There may be small pit-stops. Never before were FIRs lodged against women protestors. For the first time, an FIR was registered against agitating women in Bihar. Never before had batons rained on them.

No one can stop women when they wake up. No gun has the power to silence them, to prevent them from fighting for their rights. No matter how hard the government's propaganda machinery grinds, it will never be able to produce a vibrancy like this. The road before me bursts into different shades of red. There’s a riot of colours on the entire road, as veils turn to flags.

(These are the author 's personal views).