Group Captain Varun Singh became the lone survivor of the IAF chopper crash that killed Chief of Defence Staff Bipin Rawat and 12 others in Coonoor, Tamil Nadu on Wednesday. Singh was awarded the Shaurya Chakra early this year for safely landing a Tejas fighter aircraft during an aerial emergency. 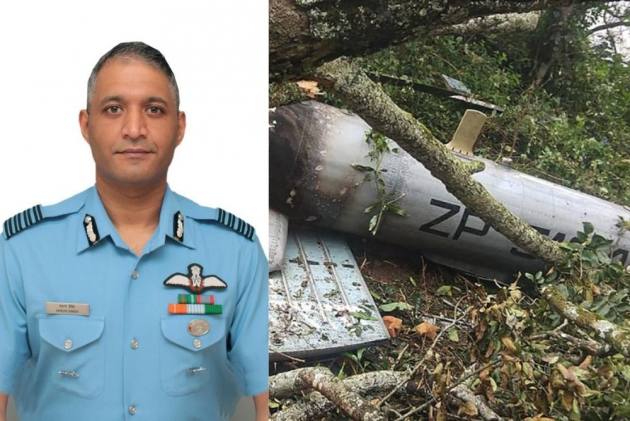 Group Captain Varun Singh, the lone survivor of the Mi-17V5 helicopter crash on Wednesday, is battling his life in the military hospital in Tamil Nadu’s Wellington. The IAF chopper with 14 people onboard crashed near Coonoor in Tamil Nadu, killing Chief of Defence Staff Bipin Rawat, his wife Madhulika Rawat and 11 other people.

The crash has shaken the entire nation with images of fire and wreckage all across social media.

Taking to Twitter, IAF confirmed the survival of Singh who has sustained severe injuries and is undergoing treatment.

In another Twitter post, Defence Minister Rajnath Singh said, “Praying for the speedy recovery of Gp Capt Varun Singh, who is currently under treatment at the Military Hospital, Wellington.”

My heart goes out to the families of those who lost their loved ones in this accident. Praying for the speedy recovery of Gp Capt Varun Singh, who is currently under treatment at the Military Hospital, Wellington.

My heart goes out to the families of those who lost their loved ones in this accident. Praying for the speedy recovery of Gp Capt Varun Singh, who is currently under treatment at the Military Hospital, Wellington.

According to reports, doctors have said that the next 48 hours will be critical for Singh. Singh’s survival will be of significance to learn the cause of the chopper crashing besides examining the black box and the forensic remains of the helicopter.

The Tamil Nadu government has made special arrangements to carry the treatment of the Group Captain at a hospital in Coimbatore. However, it will only be done in case the Air Force wants to shift him from the military hospital, reports NDTV.

On Wednesday evening a specialist doctor was called from Chennai to begin operating on Singh at the military hospital. Family sources have revealed that Singh was conscious before being taken to the surgery and even wished to speak to his wife, reports India Today.

Who is Varun Singh?

Singh’s father, Colonel (retd.) KP Singh, was an Army personnel from the regiment of Army Air Defence. Singh’s brother, Lieutenant Commander Tanuj Singh, is an officer in the Indian Navy. UP Congress leader Akhilesh Pratap Singh is his uncle.

Singh, who is based at the Sulur air base as a Wing Commander, is currently posted at the Defence Services Staff College as Directing Staff. CDS Bipin Rawat was headed for a lecture to the same college.

According to reports, it was very recently that Singh was promoted to the stature of Group Captain from Wing Commander.

Group Captain Varun Singh was awarded the Shaurya Chakra on Independence Day earlier this year for saving his Light Combat Aircraft (LCA) Tejas fighter aircraft during an aerial emergency on October 12, 2020. His aircraft is said to have lost all controls, while he managed to have a miraculous escape at that time.

He was conferred with the award for his display of extraordinary courage and skill to land the aircraft that faced major technical issues during a sortie.

Singh’s Shaurya Chakra citation said he showed a “high order of professionalism, composure and quick decision making, even at the peril to his life, he not only averted the loss of an LCA, but also safeguarded civilian property and population on the ground.”

What happened on ill-afternoon of Wednesday?

On Wednesday afternoon a helicopter crash near Coonoor Tamil Nadu was reported. Subsequently, it was reported that an IAF Mi-17V5 helicopter carrying 14 personnel, including India’s first Chief of Defence Staff Bipin Rawat along with his wife was among the people on the board.The helicopter was flying from Sulur air base to Wellington.

The exact reason behind the accident is not yet known, however, official sources said that foggy conditions may have led to the mishap.

The chopper was flying in a low altitude and crashed into a village, falling through trees. Soon, the entire chopper was engulfed in flames.

Later it was confirmed that all onboard, including General Rawat (63), were killed in the crash.

The untimely demise of General Rawat has shaken the entire world, as condolences have been pouring in from leaders of all kinds.