Who Will Gain If Kanhaiya Kumar Joins Forces With Nitish Kumar?

Nitish wouldn’t mind the CPI’s young Turk lending him a hand but is Kanhaiya Kumar game? 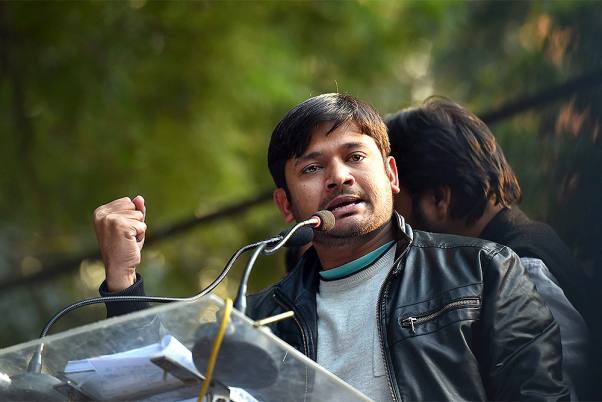 JNU Students’ Union ex-president Kanhaiya Kumar’s “surprise” meeting with a Janata Dal-United minister in Patna the other day has left political observers guessing furiously over whether the CPI’s stormy petrel is joining hands with the Bihar chief minister soon.

Both Nitish and the CPI have since scotched all speculations, with the chief minister revealing that he has also met Kanhaiya before but “never discussed politics”. He said as the chief minister, he keeps meeting MPs, MLAs and others who come to him with their issues.

Nonetheless, Kanhaiya’s meeting with Bihar minister Ashok Choudhary, who was handpicked by Nitish as the working president of the state JD-U shortly before the Assembly elections last year, seems to indicate that there is more than what meets the eye.

Firstly, there was no attempt by either side to treat the meeting as a routine affair, as Kanhaiya and Choudhary flashed smiles to the camera for a photo-op that became a talking point soon. Secondly, it took place barely a few days after CPI reportedly passed a censure motion against Kanhaiya at its national council meeting in Hyderabad, over an alleged scuffle involving his supporters at its Patna office last year.

It was enough to draw conclusions about his growing “disenchantment” with his party and his meetings with Nitish and his minister were hastily construed in the political circles as a natural corollary to the recent developments. Yet, the moot point remains: will Kanhaiya Kumar join forces with Nitish in Bihar? And if he ever does, who will benefit more from their alliance?

Nitish, for one, would not mind CPI's young Turk, widely acknowledged to be a big bright hope of the Left front, lending his hand of support to him while he is trying to regain his ground in Bihar, which he has lately ceded to BJP. JD-U’s saffron ally has risen to be the big brother since the November Assembly elections and is believed to be dictating the terms within the alliance now.

Kanhaiya’s induction into his party will serve the JD-U stalwart in more ways than one. First, his party will have a 34-year-old crowd-puller, known for his oratory in its ranks. As of now, JD-U has a number of master boardroom strategists such as the party’s national president R.C.P. Singh but does not have anybody other than the chief minister himself who can draw crowds. Kanhaiya’s presence by his side will definitely be a shot in the arm for his beleaguered party at this juncture.

There is no denying the fact that JD-U remains a one-man party and the party stares in the blank when it comes to finding Nitish’s heir-apparent from its bench strength. Nitish had in the past sought to foist election strategist Prashant Kishor as his unnamed deputy in the party but they later fell out with each other.

Second, Nitish is apparently not oblivious to the fact that the mere mention of Kanhaiya’s name raises the hackles of BJP leaders, who believe that he had spearheaded a “tukde-tukde gang”, in the wake of the JNU controversy in 2016, when some anti-national slogans were allegedly shouted during a campus meeting. After the desertion of six of the seven JD-U MLAs for the BJP camp in Arunachal Pradesh late last year, Kanhaiya’s induction may well be Nitish’s not-so-subtle strategy to get even with, if not to spite his resurgent ally.

On the face of it, Nitish is apparently looking for his potential allies for the next elections. He may well be visualising a possible scenario emerging in 2024-25, when neither BJP nor RJD will accept him as the leader of their alliance.

It is an open secret that BJP has already begun to eye the chief minister’s post, held by Nitish over the past 16 years. And it is also obvious that RJD will never push Tejashwi Prasad Yadav to the back seat just to make way for Nitish in Mahagathbandhan, given the way Lalu Prasad Yadav’s son led his alliance in the state elections.

It should, therefore, be no surprise if Nitish, a master strategist, has already started preparing the ground for a non-BJP, non-RJD front, with the possible help of Congress and the Left parties for the next polls. And nothing will be better than Kanhaiya joining his party.

But will Kanhaiya be game for it? Will he be willing to play Nitish's deputy?

The Begusarai-born leader, as his party leaders insist, is wedded to the CPI’s ideology and he will never join another party. In 2014 Lok Sabha polls, which Nitish had contested against both BJP and RJD, he had stitched an alliance with CPI in Bihar. Kanhaiya was still confined to student politics at the time, but he is in a different avatar now.

Even if he does not ultimately join JD-U, any collaboration with Nitish will be mutually beneficial to both of them should a situation unite them together for a common fight against BJP and RJD in the future.