Has the AFSPA become an ideological Act, a tool to revise Kashmir history? Many analysts believe so. 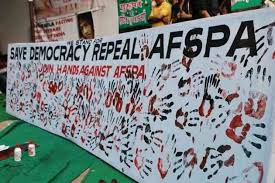 The recent killings of civilians by security forces in a case of alleged mistaken identity in Nagaland has once again rekindled the debate over the Armed Forces Special Powers Act (AFSPA). But many say Kashmir continues to be the only obstacle to revoking the legislation as there seems a national consensus that the controversial law should continue to remain in vogue in J&K. Both Congress and BJP have remained on the same page about the continuation of AFSPA in Jammu and Kashmir.

“I think AFSPA may ultimately be a device to promote and protect an ideology but I find it essentially a Defence Act giving a free hand to the armed forces to trample upon the rights with impunity and thereby kill dissent and disagreement and above all aspirations,” says National Conference MP Hasnain Masoodi.

Former Minister and the PDP spokesperson Naeem Akhtar, however, says insurgency in Jammu and Kashmir is the only war Indian security forces are fighting. “Many analysts, observers have said it has turned into a vested interest. Given their ever-increasing footfall it would be safe to conclude that this war is nowhere near the end with goalposts changing regularly,” Akhtar adds.

“The ever-increasing number and visibility of security forces should also be seen in the context of the permanent nature of their deployment for civil strife,” Akhtar adds. He says the scrapping of the special status of Article 370 means actually very little for security forces because they always enjoyed immunity from justice in Kashmir.

“What it is for the majority Indian public an ideological assertion on land whose Muslim character would run against the reality of a Hindu Rashtra. That's why just removing Articles 370, 35A was not considered enough. It is erasing the history, civilization and geography of this place. And it's a project that is being executed exclusively through force. And AFSPA is an indispensable tool in it,” Akhtar explains.

Many observers say the scrapping of Article 370 means actually very little for security forces as they enjoyed immunity from justice in Kashmir under various laws especially AFSPA.

Till Chief Minister Mehbooba Mufti’s government up to July 2018, the erstwhile state governments in J&K had sent 50 cases for prosecution sanction against the armed forces personnel under AFSPA, 1990. However, the Union government denied the permission in all the cases. Since the abrogation of Article 370 on August 9, 2019, the government of Jammu and Kashmir hasn’t sent a single case involving the army for sanction of prosecution.

In January 2018 the then Minister of State in the Ministry of Defence, Subhash Bhamre in response to an unstarred question in Rajya Sabha had said the reason for “denial/ pendency” of prosecution sanction is on account of lack of sufficient evidence to establish a prima facie case. The cases against the armed forces include “killing after abduction” “outraging the modesty of a woman”, "the disappearance of civilians, rape, and torture and killing."

The AFSPA was implemented in J&K on September 10, 1990, after a notification was issued by the State government declaring Kashmir Valley as the disturbed area under section 3 of law. Later on August 10, 2001, the erstwhile state government of J&K extended disturbed area provision to Jammu province. The Armed Forces Special Powers Act comes into force once the area is declared disturbed first under the Act.

However, the AFSPA is not applicable to the Ladakh region of Jammu and Kashmir as Ladakh was not notified disturbed ever under the law.

During his six-year tenure, 2009-2014, former chief minister Omar Abdullah constantly demanded the gradual withdrawal of the AFSPA from “peaceful areas” of Jammu and Kashmir. In 2011 Omar had expressed confidence that the day is not far when the AFSPA will be withdrawn from the state very much during the tenure of his government. “I can say with confidence that AFSPA withdrawal will take place during the tenure of this government and that day is also not very far,” he had said.

The Army, however, rejected any proposal to withdraw the AFSPA even from Srinagar and Jammu cities even when there was no militant and militancy present in both the cities. Even in one of the presentations before Omar, when he was Chief Minister, the Army had said those demanding withdrawal of the AFSPA were coming from Pakistan, the ISI, militants and secessionists. The Army in November 2011 argued, “The Country could be compelled to grant the State independence by 2016 if government plans to lift AFPSA from some areas.” Even the then Home Minister Chidambaram was in favour of the removal of the AFSPA but the Defence ministry didn’t relent at all. At that time both Congress and the BJP were on the same page and said that the armed forces should have the final say on the issue.

Later in 2015, the BJP conceded in the Common Minimum Programme (CMP) with PDP, which was described as Agenda of Alliance that the PDP-BJP government will examine the need for de-notification of the "disturbed areas" in the state.

"This, as a consequence, will enable the Union government to take a final view on the continuation of AFSPA in these areas," the CMP states. But the PDP-BJP government couldn’t do anything to make any progress on the issue.

In 2018, the BJP general secretary Ram Madhav, who was an architect of the AOA, said laws like AFSPA are "not imposed out of any fun" thus disagreeing with the then chief minister Mehbooba Mufti's pitch for the repeal of the AFSPA from some areas of J&K.

The protagonists of the AFSPA would argue that the Army’s internal mechanism is enough to deal with such issues. But no one in Kashmir takes it seriously. For instance, in the Patheribal case, the Army had killed five civilians in a fake encounter and passed them as foreign militants.

In 2007, the CBI presented a chargesheet against the accused officials in the court of Chief Judicial Magistrate, Srinagar. The Army filed an appeal in the High Court on behalf of the five accused Army officials challenging the CBI’s move, saying the prior sanction was necessary for filing a chargesheet under the AFSPA. On May 1, 2012, the Supreme Court gave the Army discretion to choose between a court-martial and a criminal trial for accused officials. The Army preferred court-martial proceedings. In January 2014, the Army in its verdict said evidence recorded could not establish a prima facie case against any of the accused, but clearly established that it was a joint operation by the police and the Army based on specific intelligence. That was the end of it.

International human rights bodies are regularly raising concern over human rights abuses and AFSPA. On July 8 2019, a UN human rights report said: “The Armed Forces (Jammu and Kashmir) Special Powers Act 1990 (AFSPA) remains a key obstacle to accountability.” “Section 7 of the AFSPA prohibits the prosecution of security forces personnel unless the Government of India grants a prior permission or ‘sanction’ to prosecute. In nearly three decades that the law has been in force in Jammu and Kashmir, there has not been a single prosecution of armed forces personnel granted by the central government.”

“In the case of Nagaland at least an FIR was registered. The Home Minister took notice of it. In the case of Jammu and Kashmir, they don’t even give bodies back. In the Hyderpora case, three persons were killed and they didn’t even return bodies. We want AFSPA to be vacated not only from Nagaland but from J&K so that incidents like Hyderpora can be prevented,” says Mehbooba. But it seems unlikely.