Samajwadi Party chief Akhilesh Yadav's bid to cut Bahujan Samaj Party's votes ahead of UP elections 2022 may not be successful owing to the party's past record, experts tell Outlook. 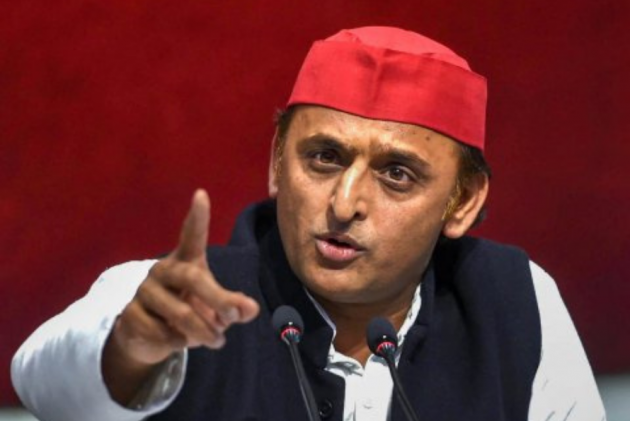 With Akhilesh Yadav calling for a combination of BR Ambedkar and Ram Manohar Lohia as he poaches leaders from the Bahujan Samaj Party to form a Dalit-backward coalition, the Samajwadi Party is trying to turn a new leaf.

Yadav gave a call for merging BR Ambedkar and Ram Manohar Lohia – the latter is considered an ideologue of justice for OBCs -- as he inducted Ram Achal Rajbhar and Lalmani Varma, formerly with the BSP, into his party. Just over a week back, six BSP MLAs had joined SP.

In the past, attempts at carving out a larger Dalit-Bahujan coalition of Scheduled Castes and OBCs have been made by the BSP on its own. Kanshi Ram wanted it. In 2007, through her focus on Sarva Samaj, Mayawati did succeed in enlisting the support of sections of the extremely backward castes and won a full majority.

Mayawati Slams Samajwadi Party For Being 'Contemptuous' Of Dalits

Samajwadi Party, on the contrary, has since 1990 thrived largely on a Yadav-Muslim core base, which could extend to some non-Yadav OBCs in the best of times. In recent years, however, the non-Yadav OBCs have veered around to the BJP.

If there have been attempts to electorally bring together OBCs and Dalits in the past, these have been when the SP and BSP aligned in 1993 to defeat the BJP and in the 2019 Lok Sabha elections, when a resurgent BJP beat a combination of SP and BSP on the ground.

Political scientist Sajjan Kumar calls Akhilesh’s announcement a new attempt but says that the past track record of the Samajwadi Party will make its success difficult. “This is a new attempt. However, the past record of Akhilesh Yadav as CM showed that villages with significant Dalit populations that were earmarked as Ambedkar villages by Mayawati for special developmental assistance were abandoned when Akhilesh became CM,” Kumar told Outlook. “Rather, as a counter to them, Lohia villages were earmarked for similar assistance, thereby projecting Lohia as an icon for OBCs against Ambedkar as a Dalit icon. These villages were different. The change was not just one of nomenclature. In these villages, Dalits were not in high proportion, as my field work in UP in 2013 showed me.”

“So, the new attempt does not have the weight of recent history on its side and the trust factor required for a major churning of voting patterns may be missing,” Kumar adds.

Political scientist Sudha Pai, a pre-eminent researcher of caste in UP, says this is a new experiment but may not succeed. Speaking to Outlook, she cited three reasons. “One, Dalits, specially Jatavs, are still with Mayawati. Two, Mayawati and Mulayam Singh Yadav did not get along well after the Lucknow guest house incident of 1995, when Mayawati was attacked by SP leaders and workers,” Prof Pai said. “Third, a large chunk of Dalits is still rural and backwards own more lands than the Dalits. There is a basic economic contradiction between them and it has to be seen whether incidents of oppression are still there, as before. It is an outside chance that there may be an electoral coming together of Dalits and OBCs on the ground but even that is difficult. Rather than Akhilesh, Mayawati would have been better suited to pull it off.”