Why Rahul Gandhi, Priyanka Have Kept Away From Bengal Campaign

West Bengal elections 2021: Does the absence of Rahul and Priyanka from the Bengal campaign trail indicate that the duo has already thrown the match? 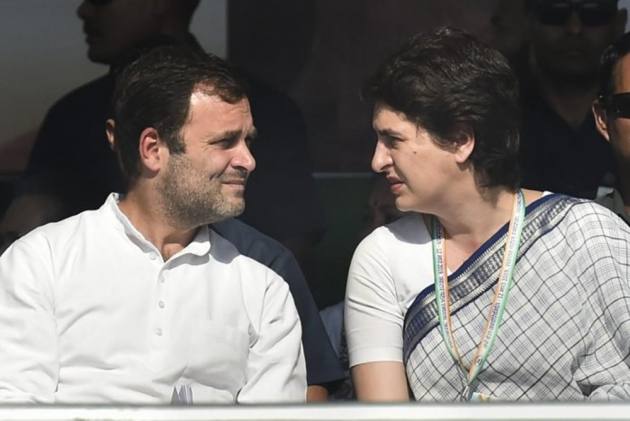 The recently concluded assembly poll campaign in Assam, Kerala, Tamil Nadu and Pondicherry saw former Congress president Rahul Gandhi and party general secretary Priyanka Gandhi Vadra canvass like never before. Rahul’s campaign itinerary saw him shuttling between these states without a break. Priyanka, who had hitherto restricted her political activities mostly within Uttar Pradesh, campaigned extensively in Assam and Kerala before a Covid-scare benched her at home in Delhi. The campaign by the Nehru-Gandhi siblings was a departure from their much-criticised fleeting appearances at poll rallies of the past; suggesting the stakes in these polls go beyond the usual and mean more to the Congress’s first family – under attack from the BJP, other political rivals and a section of their own party colleagues – than any state election in recent years.

Yet, there has been a notable omission in the campaign itinerary of the siblings; one that’s too conspicuous to ignore. West Bengal, where the Congress is fighting the polls in alliance with the Left Front and Islamic cleric Abbas Siddiqui’s ISF to save the few bastions it has left in the eastern state, is yet to see Rahul and Priyanka solicit votes for the Grand Old Party’s candidates. Does the absence of Rahul and Priyanka from the Bengal campaign trail indicate that the duo has already thrown the match? Are they simply saving themselves from the embarrassment of canvassing for a side that’s in for a devastating rout? Do the siblings attach no importance to the largest of the five poll-bound assemblies? Or are their larger political compulsions that forced Rahul and Priyanka to stay away from Bengal so far? The answer seems to be a mix of all these factors and more.

The past month of campaigning in Bengal has been dominated by the vitriolic exchanges between incumbent chief minister Mamata Banerjee’s Trinamool Congress and the BJP. Having made significant electoral in-roads in Bengal during the 2019 Lok Sabha polls, the BJP is fighting a pitched battle not to simply emerge as the principal opposition party but to grab power in the state where it had won just three legislators five years ago. Union home minister Amit Shah has been camping in the state and Prime Minister Narendra Modi too is devoting a large chunk of his time, despite the raging Covid pandemic and sundry other claims on his 18-hours-a-day work schedule. Banerjee, bound to a wheelchair since an alleged ‘attack’ by BJP workers left her with a fractured leg almost a month ago, isn’t resting easy either – campaigning furiously in her trademark style; giving no quarter to the BJP.

Congress leaders involved with the party’s Bengal campaign – Jitin Prasada, Adhir Ranjan Chowdhury, Pradip Bhattacharya, BP Singh, among others – insist that Rahul will be joining them “within the week” to seek votes for the Sanjukta Morcha, the party’s grand alliance with the Left Parties and the ISF. There’s no word yet on the possibility of Priyanka campaigning too, though the Bengal Congress unit has reached out to her several times with proposed itineraries, sources tell Outlook. “The Bengal election has been stretched for eight phases, naturally with Assam, Tamil Nadu, Kerala and Pondicherry going to polls earlier, Rahul and Priyanka were concentrating on the campaign in those states. Now that polling is over (for the other four assemblies), they will devote time to the Bengal campaign. There are still five more phases due in Bengal (on April 10, April 17, April 22, April 26 and April 29)… the bulk of the constituencies – including most of the 92 seats where the Congress is contesting – are yet to go to polls; both Rahul and Priyanka will join the campaign in the coming days,” says a senior Bengal Congress leader.

Outlook had reported earlier that neither Rahul nor Priyanka, are expected to campaign extensively in Bengal and that the duo will join their colleagues in the state only after polling in the other states was over. Congress sources say the absence of the siblings can’t be attributed to a single factor alone and a “whole array of issues” was taken into consideration.

The main focus of Rahul’s campaign in the south was on Kerala where the Congress’s principal poll rival was the Left Front-led ruling LDF alliance under chief minister Pinarayi Vijayan. “In Kerala, we are fighting against the Left while in Bengal the Left Front is our main ally. Simultaneously campaigning in the two states would have thrown up its own set of challenges for Rahul and so it was felt that our state leaders and some central observers should run the campaign for the first three-four phases and then Rahul can devote time after he is free from the engagements in Kerala and Assam, where again we are the main challenger to the BJP and the Left parties have a limited role in our grand alliance,” says a Congress leader. Besides, the leader adds, most of the Congress strongholds in Bengal – constituencies that fall in Malda, Murshidabad, Uttar Dinajpur, Alipurduars, Darjeeling – go to polls in the last three phases and it “makes more sense to have Rahul seeking votes for our candidates in these seats”.

The Congress had contested the 2016 Bengal assembly polls in a pre-poll understanding with the Left Front. The alliance had proved more beneficial to the Grand Old Party than its allies. The Congress won 44 seats to emerge as the largest Opposition party – though still 167 seats behind the Trinamool’s massive tally of 211 – in a state where it’s been on the fringes for decades. A lot has changed since then for all the political stakeholders in Bengal. Indeed, over a dozen Congress MLAs who had won in 2016 had defected to the Trinamool in later years much like a chunk of Trinamool MLAs began jumping ship to the BJP in the run-up to the present assembly polls. Several opinion polls have suggested that while the contest for the seat of Bengal’s power is mainly between the Trinamool and the BJP now – and a narrow one at that – the Sanjukta Morcha may collectively win just half the Congress own tally of 2016. Of course, the Congress and Left Front leaders vehemently rubbish such claims and insist that they are still in the race.

Unofficially, Congress leaders say there are several reasons for Rahul’s reticence in campaigning extensively in Bengal. Firstly, though its Bengal unit chief Adhir Ranjan Chowdhury is perennially on the offensive against Mamata and the Trinamool, the Congress central leadership – mainly interim chief Sonia Gandhi, Rahul and Priyanka – do not wish to engage in a vitriolic exchange with the Bengal chief minister. Sonia is known to share a personal rapport with Mamata, an erstwhile Congress leader herself, but the reasons for the Nehru-Gandhis deliberately going soft on the Trinamool chief go beyond personal niceties of politics.

Leaders of almost every other UPA constituent – NCP’s Sharad Pawar, DMK’s MK Stalin, JMM’s Hemant Soren, RJD’s Tejashwi Yadav – as also Samajwadi Party’s Akhilesh Yadav and AAP’s Arvind Kejriwal have publicly expressed solidarity with Mamata in these elections. Mamata too had reached out to leaders of all ‘secular, non-BJP/NDA’ parties seeking support against the BJP and Modi-Shah combine. This camaraderie puts the Congress, already suffering nearly a decade of electoral atrophy that has chipped away at its pole position within the Opposition Bloc, in an awkward position. Congress insiders admit that by alienating Mamata through high-pitched poll rhetoric against her, the Congress would lose a powerful satrap who enjoys support across the Opposition bloc and is known to stand up against the Modi-Shah duo like few others.

Rahul and Priyanka’s absence from Bengal for the past month since campaigning began is, thus, as much a realization of critical ground realities as it is an indicator of realpolitik. The siblings knew that, unlike Kerala and Assam, their party, despite a grand alliance, wasn’t in the race to win but, at best, to retain its limited ground in the state. And so, apportioning a chunk of their time to Bengal when it could have been better-utilized marshalling support in Kerala or Assam made no political sense. They'll hit the campaign trail now - or at least Rahul will - but only in pockets where the Congress already has some chance of winning and where the main target of their barbs can be the BJP and not the Trinamool.

Similarly, by not directly targeting Mamata when she’s already facing a bigger threat from Congress’s main rival – the BJP, the party can hope to keep the mercurial leader in good humour. After all, who knows what verdict will tumble out of the EVMs on May 2. In the unlikely scenario of a photo finish between the Trinamool and the BJP, the Congress could at least hope for some consolation prize from Didi if her party only has a slender lead and political expediency dictates some post-result compensation for courtesies extended during an otherwise virulent campaign.