Why India Should Join The RCEP Quickly

‘We are missing out big time, something which 15 countries are ready to be part of cannot be bad for India’ 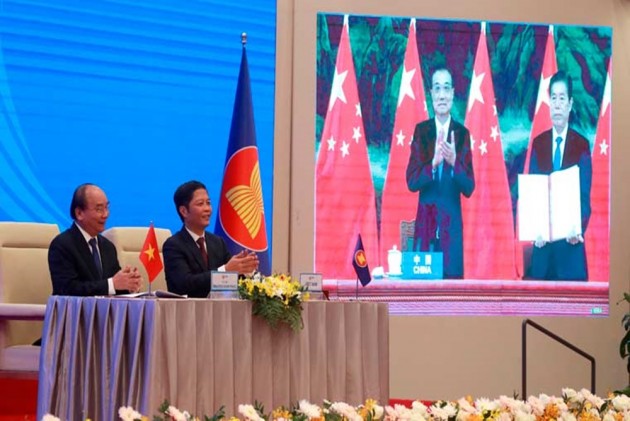 The signing of the Regional Comprehensive Economic Partnership (RCEP) by the 10 ASEAN countries, as well as China, Japan, Australia, New Zealand and South Korea on Sunday, has created the largest trading bloc in the world, surpassing both EU and the North American Free Trade Agreement, signed between the US, Canada and Mexico.  RCEP will be a game-changer, and China is in a win-win situation.

India was also in the negotiations for RCEP which began in 2012 but backed out last year. But the door is still open for India if it wants to join at a later date. RCEP members are keen that India with its one billion and more people come on board the bloc which will make seamless trade within the region a reality.

However, fearing competition, Indian industry is dead against joining the RCEP. The country’s pampered business leaders, used to protectionism from both the Congress and BJP governments, lobbied hard to scuttle the deal. After India’s 1991 economic reforms, when the economy was being opened to foreign companies, leading business leaders of that time, got together in what was then called the “Bombay Club’’ to say that Indian companies would be at a disadvantage because multinational corporates with better technology and unlimited funds would take over. They said it would not be a level playing field. All those fears proved to be unfounded, and Indian companies have all gained through this exposure. Many of them are now multinationals in their own right.

In a rare show of solidarity, the government and the opposition, especially the Congress party, are on the same page on RCEP. Government leaders have repeatedly stressed that Atma Nirbhar Bharat or self-reliance does not mean shutting the door to the outside world. India, they insist, is not for protectionism. So if countries like Japan and Australia who are part of the quad, and are politically ranged against a rising China are on board, should India have stayed away?

“We are missing out big time, something which 15-countries are ready to be part of cannot be bad for India,’’ a senior economist said on condition of anonymity. “India is far behind on opening up, on infrastructure modernization or lowering of tariffs. This was a chance for seamless trade across ASEAN countries as well as Japan, Australia, New Zealand and China, and we have unfortunately decided to sit through this mega-deal,’’ he said.

“Of course we should have joined.  Instead, we caved in unnecessarily and at the last moment, causing huge embarrassment,” avers Amir Ullah Khan of the Indian School of Management Hyderabad and professor of economics at Maulana Azad National Urdu University.

The real issue is that the domestic economy is not prepared for the competition which will come from an open trading system. India should have completed modernising its industrial infrastructure from 2012 when the negotiations first began. Productivity has to increase to be in a position to compete with imports. From agricultural produce and fruit and vegetable yields to milk output per cow, all need to increase to take on competition from Australia and New Zealand. Rational pricing of electricity is a must. With the kind of numbers that the BJP has in Parliament, as well as Prime Minister Narendra Modi’s enormous charisma, all these reforms can be easily implemented. When the disastrous experiment with demonetisation did not dent the BJP’s vote bank, it is quite clear that a short span of economic pain will not particularly be given the state of the main opposition party. In the long run, a billion Indians will prosper from an open trading system.

There is still time for India to get back into RCEP. Every member country wants it. The government should immediately initiate reforms needed to kick-start economic growth. Once some of the hard decisions are taken and the business lobbies firmly told what to expect, India will benefit from this free trade agreement. If countries like Cambodia, Vietnam, the Philippines and Myanmar can do so, what is keeping India out?