The recent reports of a bridge being constructed by China over the Pangong Lake have left many including the Chushul Councillor Konchok Stazin concerned about its motives. 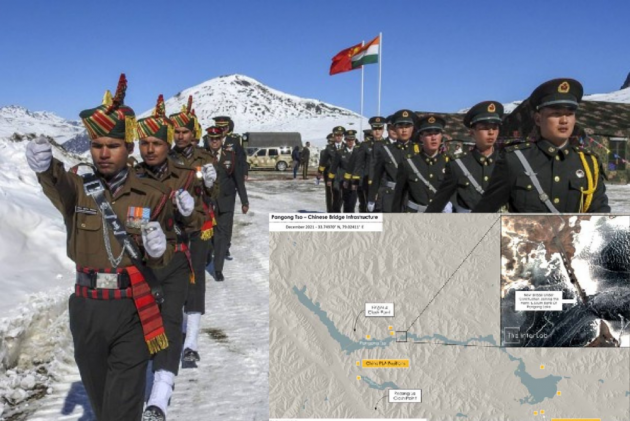 With satellite imagery accessed by geo-intelligence expert, Damien Symon indicating that China maybe constructing a bridge across Pangong Lake in eastern Ladakh, representative of Chushul in Ladakh Hill Development Council Konchok Stazin said that the Chinese are developing too much infrastructure close to home. The question is, why?

Media reports of #PangongTso allege a new bridge is under construction connecting the north & south bank of the lake, in turn enhancing road connectivity for #China's troops in the area, GEOINT of the area identifies the location & progress of the alleged structure https://t.co/b9budT3DZZ pic.twitter.com/IdBl5rkDhR

"Why are they creating too much infrastructure here? That’s the question. We have to act accordingly,” he says. Reacting to the recent reports about a bridge being built on the China side across Pangong Lake, Stazin said, "I don’t have any information about the bridge across Pangong. But in case it is built, it will shorten the distance between Moldo and Sarjaband fingers area. A major chunk of the Chinese army's infrastructure is around Spangur Lake so they have an easy exit from any areas". Stazin added that a bridge on Pongang lake was therefore automatically a threat to the region.

“The only route for reaching Sarjab or the fingers area is through Rudok. Now they are connecting the areas from many ends, on theirside” he added.

According to the Chushul representative,  China has been creating huge infrastructure in their areas, but they always put objection when such infrastructure is created from the Indian side.

Stazin has remained an advocate of infrastructure development for many years. On Defence Minister Rajnath Singh visit to Chushul in November last year, the councillor through a letter called for strong border infrastructure, modern amenities, mobile connectivity, universal internet coverage of all border villages including sanctioning of 4G mobile services. He had asked for the connection of Durbuk and other areas with Changthang and the northern grid for an uninterrupted, reliable supply of electricity. He had also called for the laying of optical fibre cables in the border area.

“The Chinese have given unfettered freedom to their nomads to move freely. They (Chinese), very often, use their nomadic community to transgress on our land in a step by step approach. Sadly, the movement of the nomads belonging to this side of the border is restricted by the Indian army from grazing their livestock on the traditional pastureland from hot spring, fingers to army named Kailash range (Nyanlung Yokma/Gongma). The nomads of the Indian side are soldiers without uniforms. The Indian army must trust them by not restricting their movement relating to grazing and collecting firewood," the Chusul councillor said.