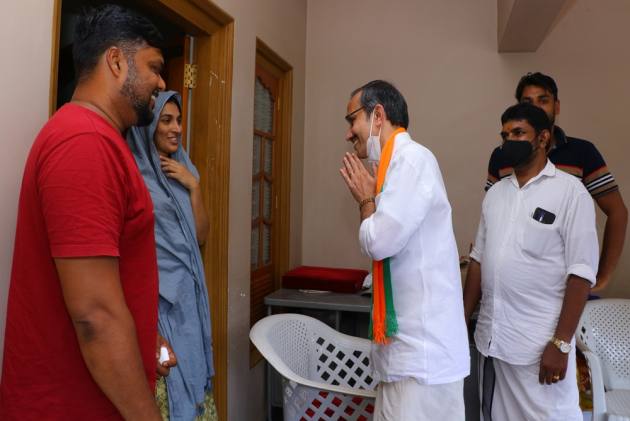 As the high voltage campaign enters the last leg in the Kerala Assembly election, the contentious issue of the new Citizenship Amendment Act (CAA) is taking centre stage again as the Bharatiya Janata Party (BJP)’s central leaders raking up the issue as the main plank.

On Sunday, Union Defence Minister Rajnath Singh‘s assertion that the party will enact CAA and bring law against triple talaq to protect the marriage of Muslim women had invited a strong reaction from Chief Minister Pinarayi Vijayan. Vijayan had reiterated that his government will not implement the new citizenship laws in the state, which is discriminatory against minority communities in the country.

The BJP’s rhetoric on implementing the CAA will only boomerang for the party as several sections of society in the state were at the forefront of protests against the law, say political observers. The persistent utterances by the central leaders will only alienate the Muslim Community which comprises 27 per cent of the population of the state. It was the CPI (M) which benefited most from the unwavering stand taken by the government on the issue, points out analysts.

As most pre-poll surveys point to a second term for the ruling CPM led Left Democratic Front (LDF), the party is harping on the ‘strong image of Pinarayi Vijayan and the past five years of achievements of his government.

The LDF government’s stand against the CAA and proposed NRC has garnered support from the Muslim community in favour of the CPM in the recent local body elections, says Prof Akbar C of Malappuram government college. “In the local body elections, the Muslim community has taken a favourable position for the LDF since it has taken a strong stand against BJP,” he says.

Even in the 2016 Assembly elections, the Muslim dominated Northern Kerala, the LDF has registered an impressive victory except in the Malappuram district. In Malappuram, the Indian Union Muslim League (IUML) — a major ally of the Congress holds sway. The LDF won 49 out of 73 seats in the seven districts in Northern Kerala. This time, the CPM is hoping to breach the citadels of IUML riding on CAA and other issues say a CPM worker.

The shift in the voting pattern is palpable, says senior lawyer Abdul Rahman who hails from Calicut. The perception of the Muslim community towards the Left parties has changed because of the government’s stern position on CAA and issues like beef banning and Love Jihad. “I was surprised when some Congress loyalists told me that they will vote for the LDF this time because of CAA. They also have faith in Pinarayi Vijayan’s strong leadership,” says Rahman. Muslims are also apprehensive about the Congress’ dillydallying on soft Hindutva and the sidelining of Muslim leaders, he says.

The community was also enthused by how Pinarayi Vijayan took on Home Minister Amit Shah on CAA and NRC issue. “Muslims feel that no leader will show such courage to challenge Amit Shah,” he says.

Analysts also say that CPM will benefit more from the Congress-led UDF’s recent stand on the CAA. Its Muslim League candidate from Guruvayur KNA Khader announced that their party will help filling up of forms when CAA is implemented.

The CPM was quick to call out the hypocrisy of the stand taken by the UDF in the matter. The CPM also alleges that it’s a clear indication of the nexus between Congress and the BJP.

“The LDF government has taken a position not to implement CAA and NRC. And Congress says they will help in filling the forms. That’s the reason for BJP not fielding a candidate from Guruvayur to help the Congress,” says a CPM leader.

The CPI (M) has succeeded in improving its relationship with Sunni Muslims, an influential section in the region because of its anti-BJP stance on many issues. A senior journalist based in Calicut says that the IUML and UDF will have to worry more as religious outfits like Samastha Kerala Jamiat-ul-Ulema (EK faction) warming up to the LDF in recent times. The Sunnis had split in 1989 and one faction led by Kanthapuram A.P. Aboobacker Musliyar had always supported the Left.

“The E K Sunni faction has more influence and they were always with the UDF. They constitute above 50 per cent of the Muslim vote banks. Now with CAA and other issues, this faction getting closer to the LDF,” he says.

The Kerala government’s gesture of organizing a human chain against the CAA on last year’s Republic Day also had attracted the Muslim community more to them.

However, there are also Muslim outfits like the Social Democratic Party of India (SDPI), Jamaat-e-Islami-backed Welfare Party of India (WPI) that adopt a hardline position.

Hameed Vaniyambalam, the state president of WPI says that the CPM’s stand on CAA is only a fake narrative.” The CPM had no role in the widespread protest marches which were conducted in Kerala. Though Pinarayi assured that cases against the anti-CAA protestors will be dropped, it’s still not done,” he says. However, Vaniyambalam says that his party will either support LDF or UDF if there is a chance of defeating the BJP in any constituency.