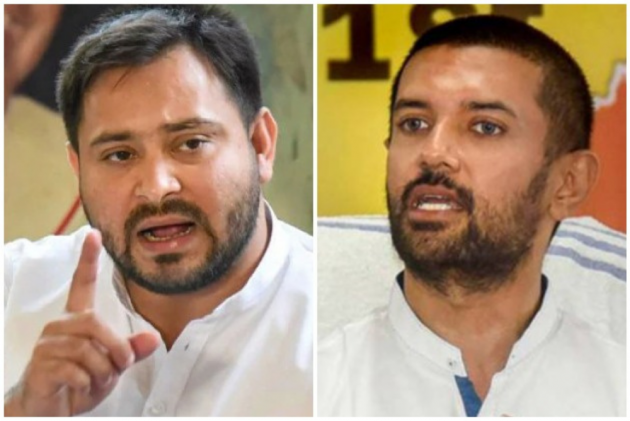 Will Tejashwi Prasad Yadav and Chirag Paswan succeed where their father, Lalu Prasad Yadav and Ram Vilas Paswan respectively, failed? That is the question uppermost on the minds of political observers as the two younger leaders from Bihar appear to be getting closer than ever before.

Lok Janskahti Party’s embattled leader Chirag called on RJD scion Tejashwi in Patna to extend an invitation to attend the first death anniversary of his father, former Union minister Paswan, who passed away last year. Though both the leaders have declined to attach any political significance to their meeting, it is being seen as a step closer to the possibility of their alliance in the future.

With the BJP accommodating Pashupati Kumar Paras -- late Paswan’s younger brother who led a rebellion of the LJP MPs against Chirag earlier this year -- in the Narendra Modi government, Chirag has a plausible option to join forces with Tejashwi in their common bid to oust the Nitish Kumar government. But the moot point is: will the RJD-LJP alliance be able to pull off something that it failed to do under formidable leaders such as Lalu and Paswan?

Lalu and Paswan had forged an alliance against the NDA led by Chief minister Nitish Kumar ahead of the 2010 assembly elections but their alliance could not get more than 25 seats in the 243-member assembly at the time. In fact, it proved to the worst-ever performance for both the parties till then.

Paswan subsequently left Lalu to join hands with Narendra Modi before the 2014 Lok Sabha elections and stayed a Union minister until his demise in September 2020. In the November 2020 assembly polls, however, Chirag decided to contest the election independently with a pledge to oust Nitish Kumar but he came a cropper. It was widely speculated that he had done so at the behest of BJP to damage the prospects of Nitish. But he was left high and dry when Paras raised a banner of revolt against his leadership. The rebellion in the LJP, political pundits stressed, had the tacit support of none other than Nitish.

Chirag has since been trying to regain his lost ground in the state where his father built his party from scratch. After undertaking a statewide yatra, he has now decided to observe the death anniversary of his father on September 12 apparently not only to build bridges and mend fences within his extended family but also to identify his friends and foes in politics. The invitation card printed for the late Paswan’s barsi (death anniversary) carries the name of his estranged uncle Paras and another LJP MP Prince Raj, his cousin, who had also rebelled against him.

Chirag has also sent invites to Prime minister Modi, Union Home minister Amit Shah, Congress leaders Sonia Gandhi and Rahul Gandhi among others. He also wants to personally invite Nitish but is yet to receive the time from the Chief minister’s office.

This is regardless of the fact that Nitish has been the prime target of Chirag’s attack over the past few months. In the course of his poll campaign, he had levelled serious charges of corruption against his government, which, of course, endeared him to the RJD.

Interestingly, while Paswan Senior had left RJD to stitch an alliance with the BJP in 2014, Nitish had severed his tie-up with the saffron organisation in 2013 to join forces with Lalu. Later, he led the Mahagathbandhan government in Bihar in 2015 before going back to NDA in 2017.

Political pundits believe that the coming together of RJD and LJP will make them a formidable political front, thanks to their traditional support base in Bihar. While RJD has been getting around 20 per cent votes, LJP’s has also got around six per cent votes in successive elections that they have fought.

It is altogether a different matter that Chirag seems to be in no hurry at the moment to stitch an alliance with Tejashwi’s party. With the parliamentary polls scheduled to be held in 2024, he apparently wants to weigh his options carefully. Also, he may not like to close his option of a patch-up with BJP. The public response to his yatra across Bihar has underlined the fact that majority of LJP supporters still look up to him, and not his uncle Paras, as the legitimate heir to the late Paswan’s legacy.

The death anniversary of his father may well help him chalk out his future course of political action. To prove himself as the chip off the old block, he should know which way the political wind blows regardless of his miscalculations in the last assembly elections.