If the exit polls are correct, barring in Tamil Nadu, the Congress will remain in the Opposition in Assam, Kerala and Bengal. A loss has also been predicted in the union territory of Pondicherry. 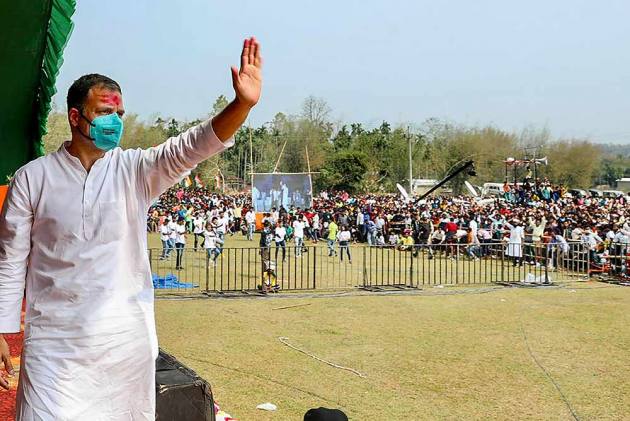 Exit polls for the crucial elections in Assam, Bengal, Kerala, Tamil Nadu and Pondicherry predict a continuing trend of the Congress party’s inability to win electoral battles. The exit polls predict with unanimity that barring Tamil Nadu, where it contested the elections on just 25 seats as junior partner in MK Stalin’s DMK-led alliance, the Congress party, will remain in the Opposition in Assam, Kerala (despite gaining more seats compared to the 2016 elections in these states), Bengal. A loss has also been predicted in the union territory of Pondicherry where the Congress was in power till a few months ago though the 30-member assembly may be headed for a hung verdict with an advantage for the NR Congress-led alliance with the BJP.

If the predictions convert into actual results on May 2, they would predictably be seen as not just a vote of no-confidence against the Congress but, perhaps more significantly for the crisis-ridden party, also against the exclusive leadership rights that the Nehru-Gandhi family has continued to exercise on the party nationally. No other elections in recent memory witnessed former party chief Rahul Gandhi and Congress general secretary Priyanka Gandhi Vadra campaign as extensively as they did in the recently concluded polls – particularly in the states of Assam, Kerala and Tamil Nadu. A defeat in these states will also coincide with efforts within the party to resolve its leadership crisis by electing a full-term president by June who can take over from the ailing interim chief Sonia Gandhi.

The Congress has, in recent months, been a divided house on the question of whether a Gandhi (read: Rahul) must once again lead the party nationally after Sonia steps down or if the baton must pass on to an “outsider”. The leadership vacuum created by Rahul’s sudden resignation as party chief after the 2019 Lok Sabha debacle has continued for nearly two years now. The Wayanad MP’s close aides, along with other party leaders who pledge fealty to Sonia and the Nehru-Gandhi family, were hoping that a favourable result for the Congress in the Assembly polls would ease Rahul’s return at the party’s helm despite reservations of the senior leaders who had, in August last year, written a letter to Sonia seeking wide-ranging intra-party reforms and a “visible and effective leadership”.

No one in the party believed that the Congress was even in the reckoning in Bengal – a state where the election was clearly fought between the Trinamool Congress and the BJP – despite stitching a pre-poll alliance with the Left parties and the controversial ISF. Congress leaders were confident of returning to power in Tamil Nadu but even Rahul had made it clear to his colleagues that such a victory – also predicted now by the exit polls – would be on the strength of Stalin’s DMK and cannot be called the Congress’s own. As such, the stakes for the Congress were highest in Kerala and Assam, where the party was praying for a surprise win despite most political analysts writing off its chances of a win when the election campaign began over two months ago.

To be fair to Rahul, and also to Priyanka, the Nehru-Gandhi siblings did try to get their act together as the campaign progressed. There is no denying that the stakes were highest for Rahul in Kerala, the state that sent him to the Lok Sabha in 2019 when his family’s pocketborough of Amethi in UP decided to bench him for BJP’s Smriti Irani. While the Congress suffered a second consecutive rout in the Lok Sabha polls, Kerala stood out for electing 19 of its 20 MPs from among the Congress and its allies. But soon after, the gains that the Congress had made in the southern state began to wither away as chief minister Pinarayi Vijayan began consolidating the Left Front-led LDF government’s hold in the state anew. The Congress continued to sink under the pressure of its internal feuds in Kerala for a better part of the past two years and woke up to the challenge of the state election only around the time the Election Commission announced the poll schedules.

Rahul campaigned extensively in Kerala; trying to woo all sections of the electorate with his deep sea diving, dancing and martial arts gigs. The party too tried to catch up and towards the final days ahead of polling tried to present a well-coordinated campaign. Rahul, say party sources, was also deeply involved in the candidate selection process for Kerala and ensured that the Congress fielded an unprecedented number of fresh faces, many of them political greenhorns who struggled their way up in party politics from the student, mandalam and Youth Congress cadres. However, if the exit polls hold true, all this was a much belated exercise that paid some clear dividends – the party is expected to double its tally of 22 seats that it had won in 2016 – but not enough to return to power. A setback in Kerala will, thus, be a more personal loss for Rahul and his backers in the party than a defeat in any of the other states.

In Assam, the Congress was hopeful of a miraculous victory on the basis of the feedback it received from the electoral battleground after the three-phase poll concluded. The party’s campaign in Assam was distinctly different from any of its earlier campaigns in the state – or indeed, anywhere else in the country. The Congress ensured that its many factional leaders in the state put up a united fight right from the beginning and that even the candidate selection process, done hitherto behind the closed doors of the party headquarters at 24, Akbar Road in Delhi, was carried out in Guwahati after detailed discussions with local leaders. The party also chose to run a positive campaign with a clear vision for Assam – it spoke of five guarantees that included non-implementation of CAA, pension for homemakers, increased daily wage for tea tribes – instead of its usual jarring anti-Modi/anti-BJP rhetoric. Both Rahul and Priyanka campaigned extensively in the state. However, the grand alliance that the party had cobbled together in the state with parties like Badruddin Ajmal’s AIUDF, the Bodoland People Front and other Left Parties in the hope of uniting the anti-BJP vote seems to have also proved to be the party’s undoing, according to the exit polls. While the party is expected to sweep the Muslim-dominated regions of the state riding on its anti-CAA stand and alliance with Ajmal’s AIUDF, it is also predicted to fall prey to communal polarisation in Upper and central Assam. Similarly, despite its efforts to woo the women voters of the state, exit polls predict that the BJP continues to enjoy support of this formidable vote bank in Assam.

A defeat in these elections, irrespective of possible gains in the number of seats in Assam or Kerala and the consolation victory in Tamil Nadu, is expected to leave the Congress even more beleaguered than it already was before the poll season began. Rumblings against Rahul’s leadership and the control of the Nehru-Gandhi family over the party may increase despite their proactive role in raising pertinent issues related to the raging coronavirus pandemic. The Grand Old Party’s first family is likely to spend the next 72 hours anxiously and hope that the exit polls, as has often happened in the past, may prove wrong and bring in some surprise cheer to them and the party.