Akhtar's office was gheraoed by students who demanded registration of FIR against Delhi Police for entering campus and allegedly beating them. 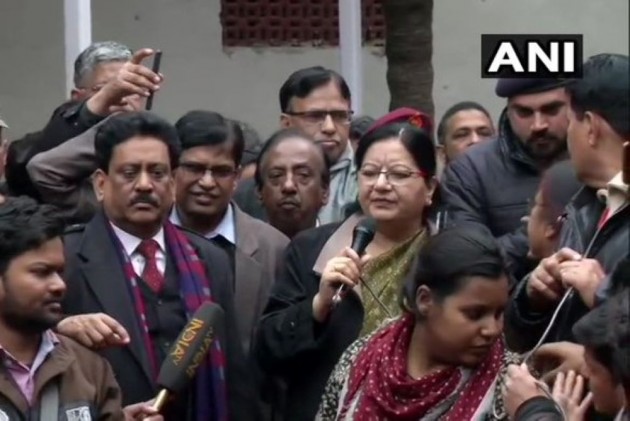 Hundreds of Jamia Millia Islamia students gheraoed Vice Chancellor Najma Akhtar's office on Monday, demanding registration of FIR against Delhi Police in connection with last month's violence on the campus, in which several pupils were injured.

The students entered the office premises after breaking the lock on the main gate and raised slogans against the VC.

Akhtar tried to pacify the students and said attempts were being made to file an FIR but it has not been registered yet. The vice chancellor said she has raised the matter with the government and has also sought legal course in the matter.

January 5, A Blood Sunday At JNU: More Questions Than Answers. Did Police Right The Wrongs?

'Texted My Mother... I Thought We Would Die': Jamia Millia Students Narrate Police Crackdown In Campus

"Delhi Police entered the campus without permission and the process of filing an FIR against them will begin from tomorrow," Akhtar said. She added that security has been doubled on the campus.

Among other demands, students also want the university to reschedule examinations and ensure security of students.

They claimed that notices were given to vacate the hostel post the violence, a charge denied by Akhtar.

Saeed Fahad, a student, said FIRs have been registered against those who were demanding their rights during protest. The real accused are still at large, he said referring to the police crackdown.

Adil, an engineering student, said not even a single FIR has been filed in connection with last month's violence.

On December 15, protestors torched four public buses and two police vehicles as they clashed with police in New Friends' Colony near Jamia Millia Islamia during a demonstration against the amended Citizenship Act. On the night of December 15,  the Delhi Police entered the Jamia Milia Islamia University campus and allegedly assaulted several students. The Jamia administration claimed that the police had entered 'forcefully'.