Will It Be 'Congress Mukt Telangana' After 12 MLAs Defect To TRS?

Congress has lost the status of the principal Opposition party in Telangana assembly. With seven members, the AIMIM, which is also is an ally of the ruling TRS, has emerged as the second largest party in the House. 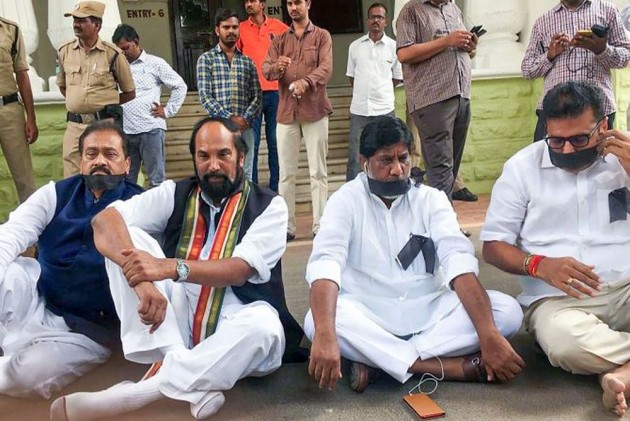 Now that the Telangana assembly speaker has accepted the request of 12 of the 18 Congress legislators to merge them with the ruling TRS legislature party, will it be a ‘Congress Mukt Telangana’?

The Congress has lost the status of the principal Opposition party in the state assembly. With seven members, the all-India Majlis-e-Ittehaduddin Muslimeen (AIMIM), which is also is an ally of the ruling TRS, has emerged as the second largest party in the House. In other words, there is no opposition whatsoever in Telangana assembly now.

In the December 2018 assembly elections, the TRS won 88 of the 117 seats. The Congress-led Grand Alliance with Telugu Desam Party and a splinter group of TRS, led by Prof K Kodandaram, on board, failed to stand up against KCR’s charisma. The Congress could manage to win 19, while the TDP could retain just two and the TJS drew a blank. BJP, which had 7 assembly seats in the previous assembly was reduced to just one.

As expected, the AIMIM managed to retain all its seven seats.

But, soon after polls, the two TDP members and the lone independent MLA joined the ruling party to take its strength to 91. This was followed by another four Congressmen crossing over to the ruling side. However, their admission into the party was put on hold after it was challenged by the state Congress leadership in the court of law under the anti-defection rules.

In a clever move, those who opted to desert the Congress party formed a group of 12 members and urged the Speaker to recognise them as the real CLP and later expressed their desire to merge with the ruling TRSLP, which will evade any legal implications as per the anti-defection law.

After winning from Nalgonda in the recent Lok Sabha elections, Telangana Pradesh Congress chief Uttam Kumar Reddy had to vacate the Huzurnagar assembly seat. As a result, the Congress was reduced to 18 from 19 and now with the defection of 12 of its MLAs, it is further reduced to just six members and lost the main Opposition party status of which Batti Vikramrka is the floor leader.

Well, Uttam Kumar Reddy and the CLP leader Vikramarka may cry foul and blame the ruling TRS for encouraging defection, but many feel, they cannot shirk their responsibility for keeping their flock together. “Why blame the TRS?” asks a senior Congress leader on condition of anonymity. He feels the fault lies with the party leadership, which, he feels, has failed to repose confidence in the party cadres. Added to it, the party’s dismal performance in the Lok Sabha elections under the leadership of Rahul Gandhi - party won 3 of the 17 Lok Sabha seats in the state.

Many senior Congress leaders like V Hanumantha Rao and Marri Shashidhar Reddy, besides others, feel that the change in guard may help party’s revival in the state as they don’t feel writing off the party’s relevance in the state. Hanumantha Rao said: “The party cadre is looking for inspiring leader, who can rejuvenate them by reposing confidence in them. As of now, the party cadre is dismayed with the leadership’s failure to take on the ruling TRS.”

He said the party leadership should find a leader who is acceptable to all factions in the party and hoped a person from the backward classes may help its revival.

Another senior Congress leader, Marri Shashidhar Reddy, who is leading the party in its tirade against the ruling TRS on various issues legally, knocking the doors of the Election Commission or courts, also endorses the ‘change of guard’ proposal by Hanumanatha Rao. However, he feels the TRS is indulging in all sorts of anti-democratic acts and making mockery of laws by using ‘money and power’ to disrupt the Congress party in the state.

“Look at what has happed soon after 2014 assembly polls. The TRS, which won just 63 assembly seats, managed to lure the entire Opposition, especially the Congress and TDP by offering them ministerial berths. Opposition protests fell on deaf ear of the Speaker, Chari, who had not taken any decision on the TDP and Congress members’ defections despite repeated requests as well as knocking the doors of the state high court. Irony is that the court too did not act, reasons best known to it, resulting in the ruling TRS anti-democratic acts encouraging defections, not following the laid down anti-defection law,” complained another senior Congress leader.

On the other hand, the TRS defends itself by claiming that how can anyone blame them? If people winning on other party tickets are choosing to join the ruling party as they feel development is taking place under the able leadership of K Chandrasekhara Rao, TRS cannot be blamed.