PM Narendra Modi is expected to visit poll-bound Himachal Pradesh on December 27 to launch a slew of projects including the Rs 6.9 crore Renuka Dam project and the Rs 8 crore Sawra Kuddu power project. 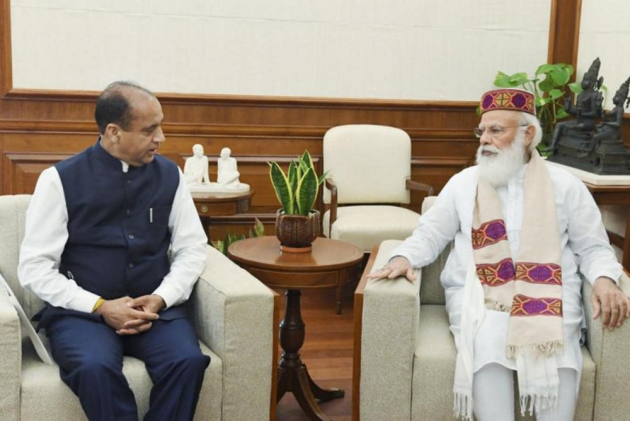 Investments to the tune of 18,000 -20,000 crore, the launch of the Rs 6,947 crore Renuka Dam and the Rs 8,082 crore Sawra-Kuddu (111 MW) power project among other development projects are lined up in Himachal Pradesh ahead of Prime Minister Narendra Modi's upcoming visit to Mandi on December 27.

The visit coincides with the completion of Chief Minister Jai Ram Thakur’s four years in power. After an embarrassing defeat in the bypolls across the state earlier in the year, Modi's visit is expected to usher in new energy for the BJP ranks in Himachal Pradesh, a state going to the polls a year later.

This is the first visit of Prime Minister Modi after the BJP lost four bypolls including the Mandi Parliamentary seat to former Congress Chief Minister Virbhadra Singh’s wife Pratibha Singh.

Thakur had met Modi in New Delhi on Monday and extended him an invitation to the state to give the BJP government a much-needed booster dose of morale.

The visit is also likely to put to end all speculations about leadership change in Himachal Pradesh ahead of the 2022 assembly polls.

"The electoral defeat is a signal for the party to tighten up its belt and turn the loss into real political gains. We will break the myth that incumbent governments never return to power in Himachal Pradesh” Thakur says.

The total cost of the projects to be launched during PM Modi's visit is worth Rs 27,000 crore. Such a scale of projects being launched in a single day is a first in the political history of Himachal Pradesh.

During his last visit to Himachal Pradesh, Modi had launched the Rs 3,400 crore Rohtang Tunnel, the world’s longest tunnel built at a height of 10,000 feet to provide an all-weather connectivity to Leh via Manali and Keylong .

Other projects slated to be launched on Dec 27 include the 210 MW Lohuri-I hydel project worth Rs 1811 crore on the Sutlej river and the 66 MW Daula-Siddh project worth Rs 688 crore in the districts of Shimla, Kullu, Mandi, and Hamirpur.

The Renuka Dam project, which will have a partnership of six states – Delhi, Haryana, UP, Uttarakhand, Rajasthan and Himachal Pradesh, will provide surplus drinking water to Delhi by raising a 148-meter rockfill dam on Giri river, a tributary of Yamuna.

At least 90 per cent cost of the project will be borne by the centre while the remaining cost is to be shared by the six states. Being the state of origin, Himachal Pradesh will get 40 MW of power from the project.

The union cabinet had cleared the project last week after a delay of nine to 10 years as the project involved a lot of legal and environmental clearances. Some of these, including the issue of rehabilitation of 700 displaced families, are yet to be resolved

Hinting that the Prime Minister will be making more frequent visits to Himachal in the coming days, however, CM Thakur said "The party will be in full poll mode after the December 27 visit." Modi is slated to visit the poll-bound state again in June-July, 2022, to for an event at the AIIMS Bilaspur branch.

Modi's visit has nevertheless come under fire from Opposition with Congress claiming the visit was a way to "cover-up" the failures of the BJP government during its four-year rule including the mishandling of the Covid-19 crisis. " The gimmicks and hype generated by BJP propaganda will not work. The people are totally disillusioned with the current rule and leadership. They are waiting for the elections to elect a new government," leader of opposition Mukesh Agnihotri asserted.