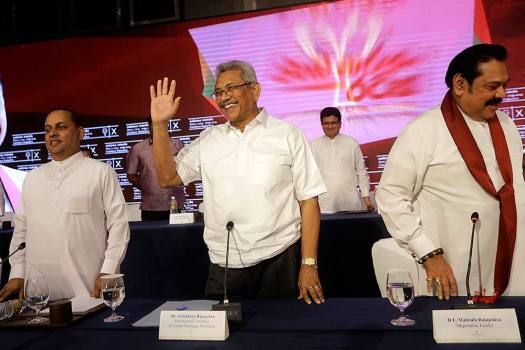 Tamil Nadu’s favourite villains are back in power – in Sri Lanka. With the victory of Gotabaya Rajapaksa, Tamil Nadu’s Sinhala phobic politicians would be dusting their gloves to target their forgotten punching bag – former president Mahinda Rajapaksa and his brother Gotabaya who as defence secretary were instrumental in the decimation of the LTTE in 2009.

Now that Gotabaya will be president and Mahinda is expected to be the Prime Minister, the two hate figures of Tamil Nadu politicians would once again be in the eye of anti-Sri Lanka politics and protests in Tamil Nadu. The surprise defeat of Rajapkasa in 2015 had muted the shrill anti-Lanka voices in Tamil Nadu that had been baying for the blood of the Lankan president and his government officials for the “genocide” of Tamils during the final phase of the Eelam war in May 2009. The state Assembly under Jayalalithaa had even passed two resolutions calling for Mahinda Rajapaksa to be declared a war criminal and India severing all ties with Sri Lanka.

While the UPA government chose to ignore this demand even while pressing for a more meaningful enquiry into the ‘mass killings’ by the UNCHR, the Modi government was presented with a political windfall of sorts with Mahinda being upstaged by his own party colleague Maithripala Sirisena in the presidential election in January 2015. With the Rajapaksas out of power and hence out of sight Tamil Nadu politicians put the Lankan Tamils issue on the back burner giving the Modi government adequate elbow room to improve relations with the island nation which saw Modi becoming the first Prime Minister to visit Jaffna during one of his two visits to that country.

Sri Lanka will be friendly with all nations, but neutral in matters among int''l powers: Gotabaya

The Indian government’s involvement in development activities like building homes, a rail network, airport and ports, especially in the war torn Tamil areas, and alerting the Sri Lankan security forces about the April 21 Easter terror attack well in advance, re-established India as the constant trustworthy friend of Lanka. The return of the Rajapaksas, who are seen as anti-Tamil and pro-China, could see the Indian engagement turn dicey even as the voices against them get shriller in Tamil Nadu. MDMK leader Vaiko has already observed that the election outcome is worrisome for Tamils. PMK’s Ramadoss has cautioned that Tamils may be at the receiving end again as they had voted in large numbers for the defeated candidate Sujith Premadasa.

India’s diplomacy with Lanka has not been tailored to suit the politics of Tamil Nadu, as illustrated by the support of the Manmohan Singh government to the 2009 Eelam war in spite of enormous pressure from the DMK, a key constituent of the UPA. But the constant refrain in Tamil Nadu against Lanka’s ruling setup proved an irritant to the relations between the two countries. “In the past Delhi had to step gingerly while dealing with Colombo so as not to fuel the anti-Lanka embers in Tamil Nadu. Under Sirisena and Prime Minister Ranil Wickramasinghe the relations improved. With the Rajapaksas back in control India needs to sharpen its diplomatic and balancing skills,” pointed out N. Sathiya Moorthy, an ORF fellow and keen Lanka watcher.

Thankfully the Modi government does not suffer the compulsions of coalition as the UPA did but with the BJP trying to paint itself in acceptable colours to the Tamils, it cannot be dismissive about the political sentiment over Lanka that would be whipped up in TN by the pro-Tamil fringe groups and reluctantly backed by the mainline parties as well. Since little headway had been made by the UNCHR in fixing responsibilities for the large scale deaths of Tamils in the 2009 Eelam war, the issue will keep cropping up periodically. And the new Rajapaksa administration will do its best to stall any probe thus kindling anger in Tamil Nadu.

“The Centre’s stand on Sri Lanka will have to be more nuanced now that the Rajapkasas have returned and the influence of China would be back. Since Tamils have overwhelmingly voted for the UNP candidate Sajith Premadasa, any moves against Tamil interests by the new dispensation would necessarily find echo in Tamil Nadu. Having invested economically in the Tamil regions of Sri Lanka, India would have to take note of that also,” admitted a senior state BJP leader.