He also asked the Trinamool supremo to come clean on whether she, too, wants a separate Prime Minister for Kashmir, just like her ally and National Conference leader Omar Abdullah. 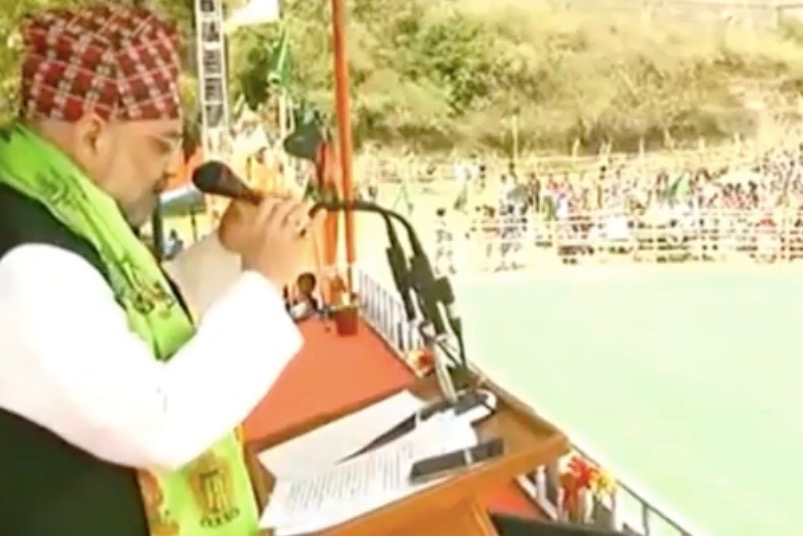 Unfazed by the sharp reactions from Kashmiri leaders, BJP president Amit Shah on Thursday reiterated that the party would remove Article 370 that gives special status to Kashmir "after forming the next BJP government" at the Centre.

He was stressing the party’s manifesto, that promises to scrap Article 370 if it comes back to power. "We would remove Article 370 from Kashmir after forming the next BJP government at the Centre." he said, while campaigning in Kalimpong.

He also criticised West Bengal Chief Minister Mamata Banerjee for questioning the Balakot air strikes, which he alleged was done to "appease" the minority vote bank. He asked the Trinamool supremo to come clean on whether she, too, wants a separate Prime Minister for Kashmir, just like her ally and National Conference leader Omar Abdullah.

We will ensure implementation of NRC in the entire country. We will remove every single infiltrator from the country, except Buddha, Hindus and Sikhs: Shri @AmitShah #NaMoForNewIndia

"Mamata Banerjee and opposition leaders are unhappy with the air strikes. They are questioning it just to appease their minority vote bank. But, I want to say it loud and clear that we won't allow such forces to win."

He also declared that the BJP government would bring NRC across the country and grant citizenship to "each and every Hindu refugee" of the country.

In the manifesto, the BJP has also resolved to annul Article 35 A of the Constitution which says no outsider can own property in Jammu and Kashmir.

Kashmiri leaders have reacted sharply to the BJP manifesto.

Peoples Democratic Party President Mehbooba Mufti  has said that abrogating Article 370 of the Constitution would lead to Jammu and Kashmir’s “freedom” from India.

“If you free Jammu and Kashmir from Article 370, you will free the state from country as well,” she said, according to PTI. “I have said many times that Article 370 links Jammu and Kashmir with the country. When you break this bridge, India loses its legitimacy over the state. It becomes an occupational force

Mufti claimed that any change in the status of Jammu and Kashmir could threaten the whole region. “Jammu and Kashmir is already on a heap of explosives and we saw a glimpse of it in Pulwama,” she said, referring to an attack on a Central Reserve Police Force convoy on February 14 which killed 40 jawans. “If the BJP does not stop making such statements and give up such intentions, it will not only burn Jammu and Kashmir but the entire region...there are explosives in Kashmir. If you will light a spark, everything will go up in flames... there will be no Jammu and Kashmir or India left

National Conference leader Farooq Abdullah said that Jammu and Kashmir will get “freedom” from India if Article 370 is scrapped. “They [the BJP] talk of abrogating Article 370,” Abdullah said at an election rally in Srinagar, from where he is contesting the Lok Sabha elections. “If you do that, the accession will also not stand. I swear by Allah, I think this is the wish of almighty, we will get freedom from them.”

“Let them do it [repeal Article 370] we will see. I will see who is ready to hoist their flag here,” he said.