'Will Strip You Naked': Jammu and Kashmir Police Detain On-call Doctor In Srinagar

A cardiologist, who was on his way to hospital in Srinagar, alleges that he was abused, detained and threatened by Jammu and Kashmir Police. The incident took place days after a leading football player from the valley was detained while he was out to see his ailing mother. 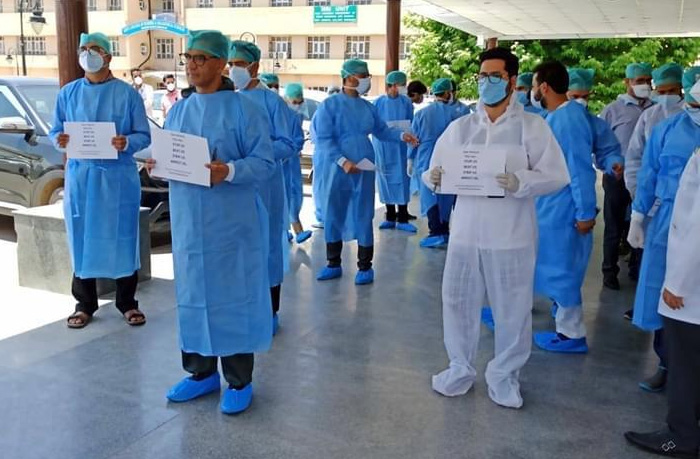 Days after an ace footballer of Kashmir accused the Jammu and Kashmir Police of high-handedness, a cardiologist has also alleged that the police beat him up and detained him for a day, preventing him from attending his duty.

Dr. Syed Maqbool, Interventional cardiologist at the Government Medical College (GMC) Srinagar said that on the morning of May 23, he was on his way to the hospital when he was stopped by the police.

“I was crossing Hawal Chowk (in Srinagar) towards the hospital when I was stopped by a constable. He asked me to turn back and take some other way despite showing him my I-card and duty roaster. That day, I was cardiologist on call for SMHS and all associated hospitals of the Government Medical College,” Dr. Maqbool said.

He said when he insisted that he should be allowed to proceed, the constable on duty abused him.

“I came out of the car and asked him that I wanted to talk to the officer in-charge. However, he hit my belly with his baton and in the meantime, the SHO came running and dragged me to the police station,” Dr. Maqbool told Outlook.

At the police station, he recounted, the officer in-charge snatched his phone and I-card and he was not allowed to make any calls to his Head of the Department (HoD). “You doctors are thieves, you indulge only in selling duplicate medicines and taking commissions. You people are good for nothing, the officer told me.”

Dr. Maqbool said the police officer threatened he would strip him naked if he continued to ask for making a call.

“But I repeatedly asked for my cell phone and then at 4 p.m. I was allowed to make a call by the officer in-charge with a warning that in case I told them I was in the police station, He told me I would  be stripped naked and put behind bars. I had to tell my colleague that I was caught up in an emergency at home,” he said.

“At 6 pm, the officer released me only after my brother came to the police station and bailed me out. My family was not able to contact me and somehow they came to know that I had been detained in the police station," Dr. Maqbool said adding that his vehicle was still in police custody.

Doctors in Kashmir have expressed shock over the incident. Principal Government Medical College Srinagar Professor Saima Rashid said: "The behavior of the police has been deplorable to say the least - we as frontline workers have been working day in and day out risking our lives and families only to be harassed.”

“We as the administration have raised the issue with concerned authorities and hope for swift action,” she said.

Director General of Police, Dilbagh Singh said that such a behaviour is not mandated or permitted.

"An incident of misbehaving by SHO Zadibal with Dr Syed Maqbool of GMC Srinagar came to my notice through social media. I forwarded it to the SSP Srinagar for appropriate action. He has ordered an inquiry into the matter...,” DGP Singh said.

“Let’s get the other side and the report into the incident. In the meantime, my sympathies are with Dr. Syed Maqbool and not with the Police officer who is reported to have caused alleged inconvenience and mental hurt to him,” the DGP added.

Last week, ace footballer of Kashmir, Mehrajuddin Wadoo, accused the police for detaining him when he was going to see his ailing mother.