Will The Raging Fire From The Pyres Singe The BJP?

Rumblings even in RSS on the Modi government’s disastrous handling of the second wave of Covid infection. 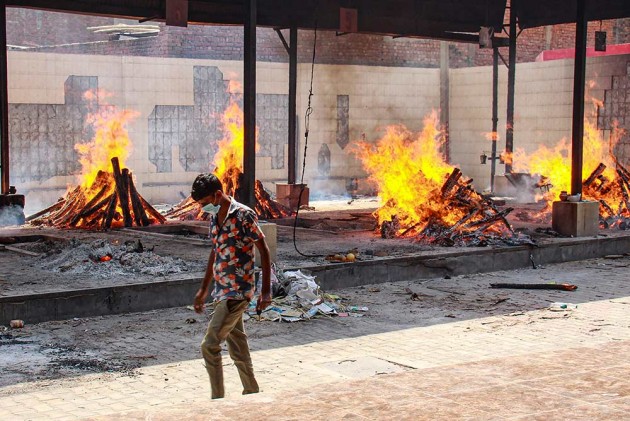 Frustration and utter helplessness at the spiralling Covid-19 cases and the collapsing healthcare system is seeing rising discontentment against the Narendra Modi government.

With heart-breaking scenes playing out across the country—patients gasping for breath due to an acute oxygen shortage; dying on the roads for not getting a bed in a medical facility and scarcity of life-saving drugs that are being sold in the black market, and cremation grounds running out of space – there is anger among the people and they are asking questions about the lack of preparedness despite enough warnings that a second wave was coming.

There is growing unease even within the BJP. The RSS, the fountainhead of BJP, too has sensed the anger on the ground and warned the party about the possible political and electoral backlash. State executive member of Delhi RSS Rajiv Tuli publicly hit out at Delhi unit of the party, calling them out for their “virtual absence” in public at a time when coronavirus is ravaging the Capital.

Taking to Twitter, he wrote in Hindi: “There is fire everywhere in Delhi, has any Dilli wala seen BJP Delhi? Where is BJP4Delhi? Or is the state body dissolved?” The public censure by the former “prant prachar pramukh” of Delhi unit of the RSS did not go down well with the BJP top brass and Tuli was forced to take down his tweet.

However, several senior leaders think that in the battle for Bengal, the party lost sight of the things that matter. “Ever since the cases started plateauing and then going down in October-November, last year, Covid hardly ever came up for discussion in party meetings. It was as if it was gone for good. The entire focus was on the Assembly elections in the four states, especially West Bengal,” reveals a senior party leader.

Sources tell Outlook that Tuli may have taken down his tweet but the RSS leadership has conveyed to the party that the narrative on the ground is changing. “The BJP needs more than a Pulwama attack that it used in the run-up to 2019 elections to rake up nationalism and patriotic sentiment for political gains,” an RSS functionary claims.

The senior BJP leaders are also struggling with the narrative as the images and videos of the unfolding tragedy are being played on the loop on TV screens, newspapers, and social media. “How much of it can we manage? We can ask social media platforms to pull down critical content and manage national media to some extent but what about the international media. Pictures of hundreds of burning pyres have made it to the front pages all over the world. There is only as much perception management that we can do. Things have to change on ground,” says a senior party leader.

Another party leader is livid at the complete breakdown of the system. “This is the party that came to power on the ‘sushasan’ (good governance) plank in 2014. Somewhere along the way, it has forgotten about it and is only focused on winning elections. And our top leaders take pride in the BJP being called an election-winning machine. This was the time for the Prime Minister, the home minister and other senior leaders to focus on managing the pandemic, even if it cost them West Bengal. They clearly had their priorities misplaced,” he says.

Now, even if the BJP wins West Bengal, they have lost the trust of millions of Indians, ravaged by the pandemic. “The Prime Minister has spoken about building a ‘Naya Bharat’. Is this the new India we want? If the government has to win the trust of the people, it has to reset its priorities completely. Maybe, even take Rahul Gandhi’s advice, and keep the construction of the central vista on the backburner. Promises of change don’t matter anymore. It has to be visible on ground,” adds the leader.