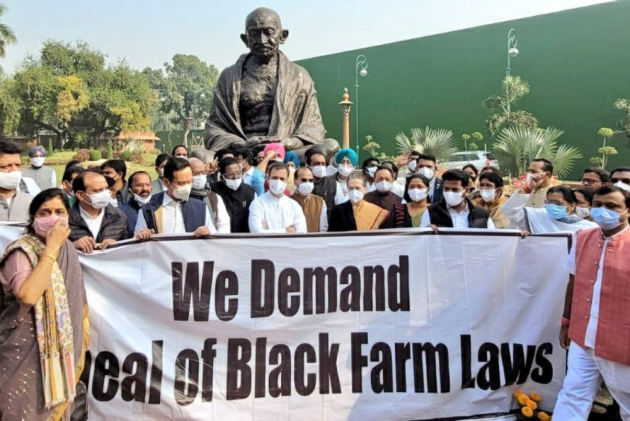 The winter session of Parliament was kicked off on Monday with Opposition leaders cornering the government on farm laws.

Lok Sabha proceedings were adjourned till noon on Monday, the first day of the Winter session, amid protests by Opposition members seeking to raise various issues.  Prime Minister Narendra Modi was present in the House.

Congress MPs led by party chief Sonia Gandhi and former president Rahul Gandhi on Monday staged a protest in Parliament complex over the issue of farm laws. The Congress President earlier addressed MPs of both the houses in the office of the Congress Parliamentary Party.

Congress President Smt. Sonia Gandhi leads our protest against the draconian farm laws imposed by the Modi govt, in the presence of Shri @RahulGandhi and other MPs.

The Congress party will not rest until the interests of our farmers are upheld. pic.twitter.com/RKBNLgFu66

Sunrise in Parliament must be in the name of farmers today, Gandhi said on Monday ahead of the session in reference to the repeal of the three contentious farm laws on the first day of the session.

"Today in Parliament sunrise should be in the name of the ‘annadata’ (Aaj sansad mein annadata ke naam ka suraj ugana hai),” Rahul Gandhi said on Twitter using the hashtags #MSP and #FarmLaws.

The Congress and other opposition parties have been demanding that the farm laws be repealed on the first day of the session itself and a new law be passed to provide legal sanctity to minimum support price to farmers for their produce.

Congress’ whip in the Lok Sabha Manickam Tagore has moved an adjournment motion asking the government to repeal the three farm laws immediately and to provide compensation to the families of 700 farmers who lost their lives during the year-long agitation against the farm laws.

The government has listed the bill to repeal the laws in Lok Sabha. The matter will be taken up in the Rajya Sabha soon after it is passed in the lower house.

Meanwhile, PM Modi addressed the media ahead of the Winter Session and said the government is ready to discuss all issues and answer all questions but the dignity of Parliament and the Chair should be maintained. He said citizens want Parliament to debate on issues of national interest and find ways for the development of the country.