Chandrashekhar Azad said everyone had heard about Jallianwala Bagh, but now they are talking about Shaheen Bagh. 'I promise you that in the next 10 days, there will be at least 5,000 Shaheen Baghs across the country.' 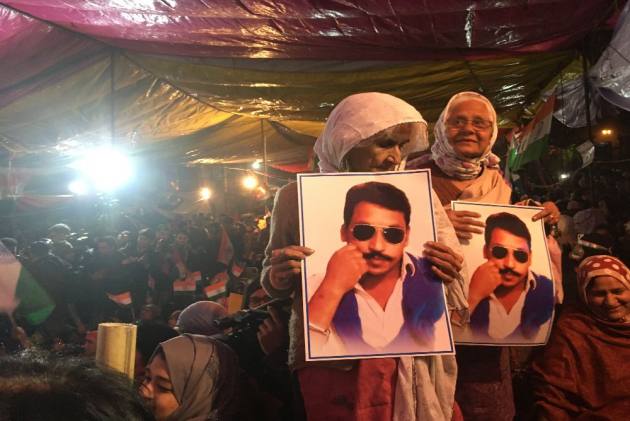 Women and children take their spots under a red, yellow and white tent, the now-famous grannies -- with the photographs of Bhim Army Chief Chandrashekhar Azad – are sitting in a corner just metres away from the stage, and men -- some in rows, others disintegrated – are standing outside the protest area, fenced by thin ropes, in Delhi's Shaheen Bagh.

On stage is a group of young boys, one of them holds a huge tricolour and raises a slogan: "Inquilab", to which the crowd responds "zindabad." Right opposite the stage, the protesters, too, keep Indian flags high, on the 38th day of their demonstration against the Citizenship Amendment Act (CAA) and proposed National Register of Citizens (NRC).

On a Tuesday evening, the women are "eagerly waiting" for Azad. “Humara ladka aa raha hai (our son is coming),” they say. A young woman, with a red stole wrapped around her head and neck, gestures at media people, to step aside and "not block her view of the stage".

Azad, in his trademark white shirt and blue scarf around his neck, arrives on stage -- under the shadow of Dr Bhim Rao Ambedkar's portrait -- with a copy of India's Constitution, something he held aloft at Jama Masjid last month, following which he was arrested by the Delhi police.

Before addressing the crowd, he wraps his scarf tightly around his head; the protesters cheer once again.

"I congratulate those who have participated in this protest. This is not just a political agitation. We have to save the Constitution and unity of the nation," he tells the women, staging a sit-in against the CAA and proposed NRC for over a month now.

"I promise you that in the next 10 days, there will be at least 5,000 Shaheen Baghs across the country".

The Dalit leader says everyone had heard about Jallianwala Bagh, but now they are talking about Shaheen Bagh. "If you have the courage of sacrifice, then you have to sacrifice by holding your demonstration peacefully," he says.

"Till the Bhim Army is here, this law would not be applicable and they have to go through my corpse (to implement it)," Azad says.

Meanwhile, two women are frustrated at the microphone. "Today, when our Azad is here, the mic is malfunctioning," says one.

Azad addresses that concern, too. "Don't worry, I will come back again."

Reshma, a housewife who has been participating in the protest since day 1, says Azad's arrival had given a fresh lease of life to their demonstration against the "black law."

"The best part about him is that he believes in the Constitution of India; he wants to fight all the battles with a copy of 'samvidhaan' in his hand," she says.

Reshma says at a time when the Supreme Court granted the Centre another four weeks to respond to the pleas challenging the CAA, they "needed Azad".

"Look around, do you think anyone is disappointed here?" says Reshma as her fellow protesters respond to the call for "azaadi" from the stage.

Another young woman, who didn't want to be named, said the fact that "Azad returned to Shaheen Bagh after spending so many days in the jail speaks volumes of his faith in us."

"No one is tired here. I am just disappointed in the PM, who speaks about women and girls everywhere and look he doesn't see us," the woman says, adding "we have braved the coldest months of the year and won't mind sitting here for another month.

On stage, it's time for Azad to take leave, but not before he gets the crowd to sing with him. "Sarfaroshi ki tamanna ab hamare dil mein hai, dekhna hai zor kitna baazu-e-qatil mein hai." The protesters sing in unison, the Indian flags, of all sizes, flutter, the grannies smile as Azad chants: "samvidhaan..."