With Eyes Set On Upcoming UP Polls, Priyanka Urges Congress Cadre To Step Up 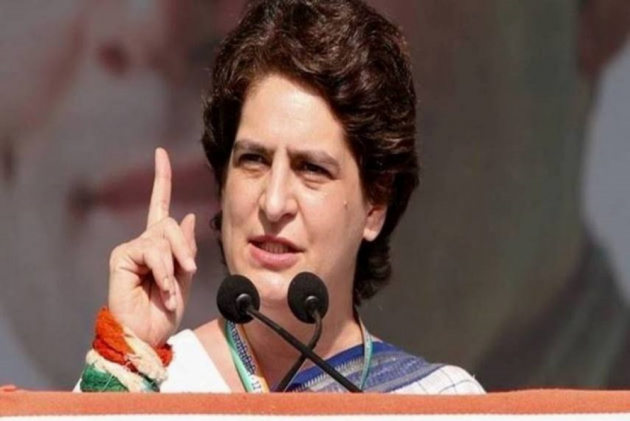 Congress general secretary Priyanka Gandhi on Saturday urged his party workers to start working round the clock for the upcoming Uttar Pradesh elections.

The UP polls are slated next year.

Gandhi said a strong Congress organisation is equally important for nation building, and stressed on her party workers to work hard for the upcoming UP polls.

On a visit to the state to review the party's poll preparations, the Congress general secretary held meetings with leaders and office-bearers, and also took reports from districts and city presidents, state secretaries, general secretary and state vice-presidents, a party spokesperson said.

Gandhi also held zone-wise meetings with respective office bearers, the spokesperson said, adding brainstorming sessions up to the block, wards and naya panchayt level were also held to map out the election strategy.

Gandhi said a strong Congress organisation is equally important for nation building, the spokesperson said, adding she also took feedback from the office bearers on all important issues ahead of the upcoming elections.

Gandhi, who has been working towards strengthening the party to make it election ready, stressed on the importance of a strong organisation, a party spokesperson said.

A strong organization is needed not only for the party but also for nation building. As the elections to the Uttar Pradesh assembly are very near, Congress party workers need to work day and night, she told partymen.

On the issue of ticket distribution, she said the office bearers of the organisation will play an important role in deciding the names of candidates for the next year's elections, according to the spokesperson

The Congress leader said the organisational work is at the last stage.

Gandhi had arrived here on Thursday evening and is scheduled to visit Rae Bareli, the parliamentary constituency of her mother and Congress president Sonia Gandhi, for two days beginning Sunday during which she will hold meetings with party workers, leaders and the people.

During the zone-wise review meeting with party leaders earlier on Saturday, the Congress leader discussed several issues, including the farmers' protest over the three agri laws.

In a statement, the party said deliberations were held on the poll strategy for western UP and Gandhi sought reports from every village.

The farmers' protest over the three agri laws also came up for discussions, the statement said.

Thousands of farmers from Uttar Pradesh and neighbouring states had gathered at Muzaffarnagar on Sunday for a 'Kisan Mahapanchayat', months ahead of the crucial UP assembly polls.

The event was organised by the Samyukt Kisan Morcha (SKM) at the Government Inter College ground in Muzaffarnagar to protest the Centre's three farm laws.

On Friday, the Congress decided to take out a 12,000 km-long yatra through villages and towns of Uttar Pradesh ahead of the assembly polls next year.

The decision to take out the "Congress Pratigya Yatra:Hum Vachan Nibhayenge" was taken at a meeting presided over by Gandhi, and attended by members of the party's advisory and strategy committee here, the Congress had said in a statement.

The yatra will draw attention of people to issues of corruption, inflation, crime, violence against women, unemployment and poor health services, the party said on Friday.

During the yatra, Congress leaders will assure people that they will fulfil promises made by the party in the run up to the polls. (With PTI inputs)