At 11:50 AM, Kejriwal arrived at the Ramlila Maidan, the place where, in 2011, alongside activist Anna Hazare, he had led the anti-corruption movement against the Congress-led UPA government. 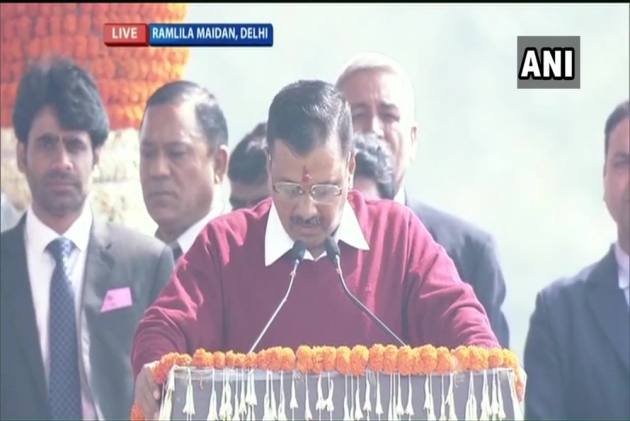 At 11:50 AM, Kejriwal arrived at the Ramlila Maidan, the place where, in 2011, alongside activist Anna Hazare, he had led the anti-corruption movement against the Congress-led UPA government. Moments before the oath ceremony, the national anthem was played and thousands of supporters joined and sang at the venue.

Elaborate security arrangments were made for the oath ceremony as Kejriwal requested the people of national capital to "bless the son of Delhi."

Interestingly, no state chief minister or influential state leader was invited to the oath ceremony, a sign of caution that Kejriwal and his party are currently exercising.

The theme at the Ramlila Maidan among the enthusiastic crowd seemed to be that of nationalism with patriotic songs being played over the loudspeakers. Songs of film 'Border', 'Rang De Basanti' were being played.

At the Ramlila Maidan, AAP supporters holding tricolours also displayed posters that said: "Nayak 2 is back again". The poster has a picture of actor Anil Kapoor along with that of Arvind Kejriwal wearing the famous 'Anna cap' with Aam Aadmi written on it.

On Saturday, Kejriwal asked his Ministers to start focusing on the guarantee card.

Kejriwal said this at a dinner meeting hosted by him for the six Ministers -- Manish Sisodia, Satyendar Jain, Gopal Rai, Kailash Gehlot, Imran Hussain and Rajendra Pal Gautam -- appointed by the President.

"The focus will be on developing a roadmap for making Delhi a 21st-century global city," sources said.

Among the top priorities is likely to be the doorstep delivery of ration and free bus rides for students. The Aam Adami Party (AAP) government will also attempt to implement the 'deshbhakti' (patriotism) curriculum in schools by the next academic session.

On Sunday, Kejriwal was sworn-in as the Chief Minister of Delhi for the third time in a row.

Big banners with messages like 'Dhanyawad Dilli' along with the image of Kejriwal were put along the route to Ramlila Maidan.

Referring to himself as "son of Delhi", Kejriwal had extended an invitation to Delhiites for his oath ceremony and tweeted, "Am so glad that such large no of people are joining the new politics - kaam ki raajniti."

On Saturday, Kejriwal had tweeted that autorickshaw drivers, students, teachers, doctors, labourers etc will be the "chief guests".

The venue also served as the battleground for Kejriwal during India Against Corruption movement in 2011.

By winning 62 seats by cashing in on the plank of development, his party nearly repeated its 2015 performance, sweeping the Assembly polls in the face of a high-voltage campaign by the BJP, which had fielded a battery of Union Ministers and Chief Ministers in its electioneering, spearheaded by Home Minister Amit Shah.

The BJP marginally improved its tally, managing just eight seats from its 2015 tally of three seats. The Congress failed to open its account in the second successive election.