With Her Own Political Stock Diminishing, Can Sonia Gandhi Revive Congress?

What is important now is where Congress goes under Sonia, who first became party president in 1998 and held the post for 19 years until December 2017, making her the longest-serving president in Congress' history. 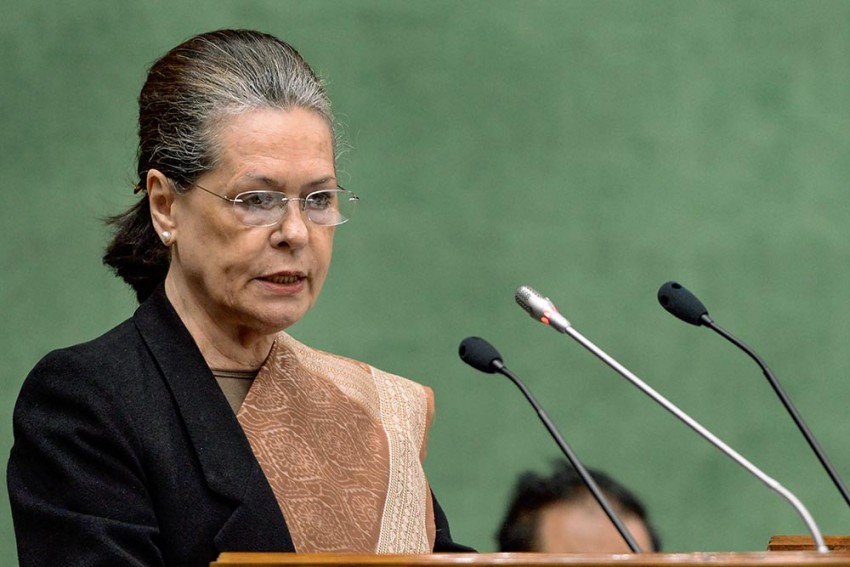 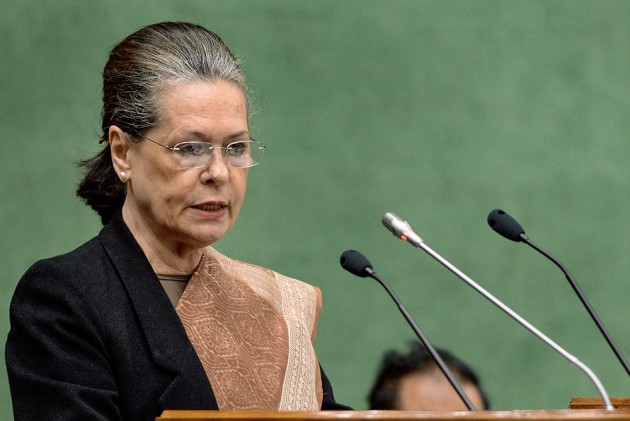 Ever since Rahul Gandhi stepped down as Congress president, on May 25, taking responsibility for his party’s humiliating Lok Sabha debacle, he had insisted that his successor be a non-Gandhi. Rahul’s resolve won him applause from all quarters for being a rare politician who believed in accountability in politics. His detractors, particularly from the BJP but also including from within his party, however, scoffed at his suggestion of non-Gandhi steering the 134-year-old Grand Old Party.

On August 10 –- 78 days since Rahul’s announcement -– the Congress party, especially its Old Guard that had carefully crafted its hegemony using decades of loyalty to the Nehru-Gandhi family to legitimize a long-past or never-existent political and public base -– succeeded in proving the detractors right: The party needs a Gandhi at the helm.

Some 20 months after she handed over the reins to Rahul, strengthening the impression -- if  there ever was need for it -- that Congress is a family firm of the Gandhis, 73-year-old Sonia Gandhi was unanimously asked by the Congress Working Committee (CWC) to take over as interim president from her 49-year-old son until an AICC session is convened to elect a new chief.

That the decision came after deliberations lasting an entire day, first within the CWC, then among five region-wise sub-groups constituted at Rahul's behest to give voice to the party’s younger leaders and then again at the CWC, proved indubitably that a party with a history of 134 years which once groomed a plethora of formidable leaders indubitably had no leader outside the Nehru-Gandhi lineage today who could steer the ship.

“Best decision given the circumstances” was how nearly all Congress leaders described the CWC resolution naming Sonia the interim chief, unwittingly conceding that the party was under a prolonged spell of chaos, from within and outside. Among those who used this common template on Twitter included Punjab chief minister Captain Amarinder Singh, Thiruvananthapuram MP Shashi Tharoor and Mumbai Congress leader Milind Deora who until the morning of August 10 had steadfastly demanded a “young, dynamic consensus builder” succeed Rahul.

Shortly after Sonia came out of the CWC consultations, she made her way to the press pen at the AICC office giving an impression that she would speak to the media but walked away in a huff amid the cacophony kicked up by journalists and television crews. AICC general secretaries K.C. Venugopal and Randeep Surjewala, who made the announcement late Saturday night, insisted that Sonia was made interim president because the CWC had no powers within the party constitution to elect a full-time chief. The two leaders said an AICC session will be convened soon after discussions with Sonia to elect the full-time party president but conceded that there was no timeframe on when this session may be called.

As per the Congress Constitution, while the CWC can indeed appoint only a “provisional president”, the election for a full term chief must be done “not later than six months” after the working committee’s resolution. A senior Congress leader told Outlook, “This gives us time till January to evolve a consensus over the next party chief”. Another CWC member, known for her proximity to Sonia Gandhi, told Outlook that with a six-month window “the party is hopeful that it can prevail upon Rahul to take back the reins or at least convince Priyanka Gandhi to assume the responsibility”. The two statements pretty much sum up the choices the party’s Old Guard is willing to go with -– the Congress chief must be a Nehru-Gandhi, no other surname, even of another dynast like Jyotiraditya Scindia or Sachin Pilot, is acceptable to them.

At the discussions among the five regional sub-groups, party sources said, the Old Guard made strident efforts to scuttle any suggestion of a non-Gandhi party president. “The entire exercise was meant to either endorse Rahul’s leadership or if he remained adamant on stepping down, ask Priyanka to take over… if she said no, go back to Sonia. None of the suggestions for a non-Gandhi alternative was entertained,” a state Congress president part of the east region sub-group told Outlook.

The eventual decision of the CWC, thus, seemed pre-scripted, if not at the behest of the Gandhis, then certainly through the designs of their loyalists. But then, that’s past. What is more important is where the Congress goes now under Sonia who had first become Congress president in 1998 and went on to hold the post for 19 years until December 2017, making her the longest-serving president in the party’s history.

Nearly everyone in the party concedes that handing over the reins back to Sonia was a “compulsion” -- Nehru-Gandhis are the glue that keeps Congress from falling apart has been an oft-quoted refrain. Among the names that had been bandied about as probable successors to Rahul were Mukul Wasnik, Scindia, Pilot, Venugopal, Mallikarjun Kharge, Kumari Selja and several others. The intra-party discussions on the subject through the past two months and more specifically on Saturday made it clear that “none of these leaders would enjoy the popular mandate of Congress workers even if they had the combined endorsement of the three Gandhis.” A senior leader told Outlook that the most vociferous opposition to Wasnik, considered the frontrunner in the race, had come from leaders of his home state, Maharashtra -- scheduled for assembly polls later this year. The same was true for Scindia and Pilot, too. There had also been veiled suggestions that a non-Gandhi Congress chief may even be “co-opted by Narendra Modi and Amit Shah” or that such a leader’s commitment to the party “will always be suspect.”

A former Congress chief minister, however, told Outlook that the extant political situation was “markedly different and more ominous” than most of the 19 years when Sonia served as party chief. “Her political stock is no longer what it used to be. In the initial years of the first Modi government, Sonia’s word mattered among the entire Opposition bloc -– if she, personally, asked the non-UPA opposition parties for cooperation, she was rarely ever turned down. During the 2019 Lok Sabha polls and through the recent Parliament session, we saw this was no longer the case. One Opposition party after another turned their back on her whenever she asked for an alliance or floor coordination in the Parliament on crucial Bills,” the party veteran said.

Sources say that even within the Congress, leaders were willing to break ranks with Sonia and even Rahul on crucial ideological matters if they feel that doing so will help them stay on the right side of a political narrative now firmly controlled by Modi and Shah. This has been evident during the ongoing brouhaha over the Centre’s decision to abrogate Article 370, something the Congress has ideologically been opposed to. Despite Sonia’s repeated pleas to her party colleagues to condemn the government’s move, many leaders -– old and young -– backed the decision. At Saturday’s CWC, sources said, Rahul was forced to say those party colleagues who wished to support the abrogation of Article 370 which strips Kashmir’s special status were free to resign.

Party leaders say that keeping the Congress flock together may no longer be an easy task for Sonia, who like Rahul had first taken over as Congress chief at a time when the party was believed to have hit its political nadir. But, the organizational rot and the Congress’ existential crisis during the Rahul years has been far deeper than 1998. “When Sonia first became party chief, the Congress still held its bastions in the central, south and northeastern states while our numbers in Lok Sabha never went below 100. Today, we have only improved from 44 to 52, have no MP across 17 states and UTs and are out of power in all but four states and a Union territory. Forget reviving the party, keeping the flock together itself will be a monumental task for Sonia,” a state Congress chief told Outlook.

Pacifying the party’s young leaders who see their ambitions repeatedly thwarted by the Old Guard and who were all given plum posts by Rahul despite Sonia’s insistence of maintaining a balance, will be among the biggest challenges for the Congress matriarch.

A member of the party’s Old Guard who perhaps understood that the friction with the younger generation needed an immediate remedy and sided with demands for a “fresh face” as party chief before being checkmated by contemporaries like Ahmed Patel and Anand Sharma predicts major intra-party clashes in the days to come. “It is important to accept that over the past two years, Rahul had built his own team. He had appointed a majority of the PCC chiefs, CLP leaders and AICC secretaries to effect a transition from the Old to the Young. Most of these young leaders have not yet earned Sonia’s confidence because she largely remained aloof from organizational matters during Rahul’s presidency. Naturally, these younger leaders will now feel threatened because they know the Old Guard will try to reclaim its clout. If this happens the younger lot will eventually be forced to look at other options,” the leader said.

A party general secretary told Outlook that Sonia is expected to begin discussions later this month on revamping the organisation. Her task won’t be confined to making the party battle-ready for the assembly polls due in Haryana, Jharkhand and Maharashtra, where the party is in a state of utter disarray with no immediate signs of improvement, but will also be to strike a balance between the “egos of the Old Guard and the ambitions of the Young Turks” while simultaneously exploring pre-poll alliances and enlisting wider support of Opposition parties to take on the Modi-Shah duo.

During her stint as Congress president, Sonia had left many stunned with her ability to rebuild the party, pacify disgruntled veterans, stitch coalitions and become the fulcrum of Opposition unity –- mean achievements that helped the Congress return to power in 2004 for a decade. Now, with her health a subject of constant speculation, her party-ready to crumble like dominoes, her son still sulking and a BJP that unlike the party of Atal-Advani is unwilling to extend her any political courtesies, Sonia has returned -– irrespective of the duration of her "interim" stint -– for what will be her toughest political challenge. Can she deliver?

How Congress' Old Guard Convinced Sonia Gandhi To Return As President, For Now