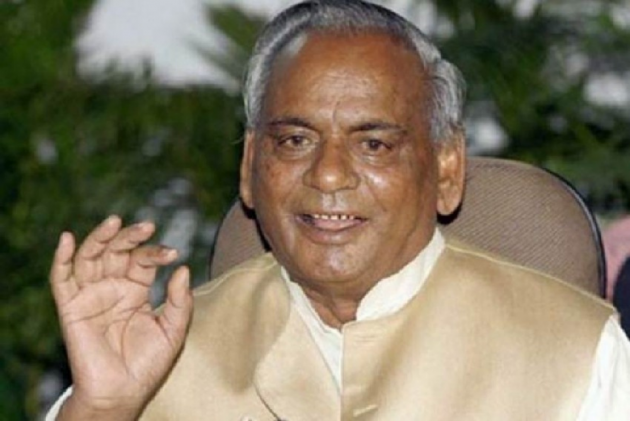 The ashes of Kalyan Singh, who brought together caste identity and Hindutva—as the most powerful political mix, were immersed at Ganga’s Basi ghat in Narora.

Rajveer Singh, a BJP MP from Etah, reached the river bank with the ashes in three containers. The ashes from one of the containers were dispersed at the Basi ghat, amid the chanting of Vedic mantras and slogans of ‘Jai Shri Ram’.

This marked the beginning of BJP’s ‘Asthi kalash yatra’ across the poll-bound Uttar Pradesh. The remaining two containers will be taken to Ayodhya and Kashi in a solemn yatra, traversing through the state, before immersion of the remaining ashes in the Saryu and the Ganga rivers, respectively.

Originally, the BJP had planned to include the Sangam at Prayagraj too but decided against it, sources in the party's UP unit say.

Kalyan Singh passed away on August 21 after a prolonged illness at 89. He was cremated with full state honours on August 23 with all senior party leaders in attendance.

The yatra is believed to remind the people of UP what late Kalyan Singh stood for – the Ram janmabhoomi campaign and a prominent OBC leader – both the issues that are important for the BJP in the coming assembly elections. The party had returned to power in UP in 2017, reaping the benefits of caste identity and Hindutva synthesis.

BJP had organized a similar ‘Asthi kalash yatra’ in honour of late prime minister Atal Bihari Vajpayee when he passed away in August 2018. His ashes had been handed over to party’s state unit presidents across the country as processions were carried out in all the state Capitals. The ashes were then immersed in rivers across India, including UP, Madhya Pradesh, Maharashtra, Tamil Nadu and Haryana.

Deputy chief minister of the state Keshav Prasad Maurya announced that the road leading to the Ram Janmabhoomi complex in Ayodhya will be named 'Kalyan Singh Marg' to pay tribute to the veteran leader.

He said, there is also a proposal to name one road each in Lucknow, Prayagraj, Bulandshahr and Aligarh after “Ram bhakt Kalyan Singh”.