The challenge that the Congress faces at present is it has to fight not just internal dissidence and the BJP but deal with anti-BJP regional parties, who are no longer seeing it as a viable ally. 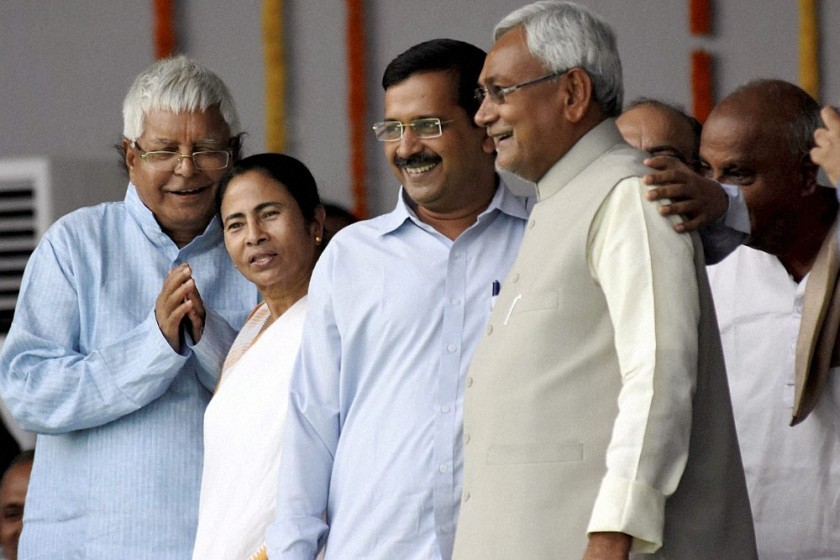 At a time when the Opposition needs greater unity to take on the BJP, the challenges of the main Opposition party, the Congress, may in fact be coming from regional parties.

Close on the heels of multiple statements made against the Congress by the Trinamool Congress, the latest salvo was fired by Rashtriya Janata Dal leader Lalu Prasad, who wondered why the RJD should give a single seat to the Congress.

“What is Congress’s alliance? Would we have left things to Congress for losing? For losing security deposits?” Prasad asked reporters.

The context: the RJD leader was asked about the RJD fielding its own candidates for the coming assembly by-elections in two seats in Bihar--Kusheshwar Asthan and Tarapur. Last time, in alliance, the RJD had contested Tarapur and the Congress Kusheshwar Asthan. The Janata Dal (United) had, however, won both seats. This time, both Congress and RJD are contesting separately on both seats.

The latest trouble from the RJD apart, the Congress has faced many attacks from the TMC in the recent past. Two days back, TMC leader and Mamata Banerjee’s nephew Abhishek Banerjee said that a vote for the Congress would be a “waste”, as the TMC had been defeating the BJP while the Congress had been getting defeated by the BJP. West Bengal minister Firhad Hakim even said that the Congress in Bengal should merge with the TMC if it wants to survive in the state.

The TMC has also been poaching leaders from the Congress. Sushmita Dev from Assam, Luizinho Faleiro from Goa and a number of Congress leaders from Tripura have quit the party to join the TMC.

Furthermore, in Siliguri on October 25, Uttar Pradesh Congress leaders Rajesh Tripathi and Lalitesh Tripathi joined the TMC in the presence of Mamata and Abhishek Banerjee. Lalitesh is the great grandson of former UP Chief Minister Kamalapati Tripathi.

In Uttar Pradesh, Samajwadi Party of Akhilesh Yadav has already weaned away Imran Masood and Rajaram Pal from the Congress.

Political scientist Vikas Tripathi, who teaches at Gauhati University, believes that the Congress is becoming “uncoalitionable”, as it no longer has a secure vote base. Regional parties, however, still have their vote bases intact. In such a scenario, says Tripathi, if regional parties give the Congress a significant share of seats, the BJP/NDA end up winning most of those. “If they don’t ally with the Congress, the visible activity of Rahul and Priyanka can only split a bit of the opposition vote, which regional parties fighting the BJP are wary of,” Tripathi told Outlook. “This is why instead of allying with the Congress, they are looking at poaching those leaders from the Congress who may have a small sphere of influence on a few seats. They want to get votes directly through these leaders rather than allying with the Congress.”

Political scientist Manindra Nath Thakur, who teaches at JNU, says the Congress needs to build its own organisation in the long-run and seems to be trying the same, but the flipside of this process is that as of now it may cut into opposition and not BJP votes.

Sociologist Anand Kumar told Outlook that the idea of a national opposition party, which the Congress sees itself as, no longer works: “It has to be a federal arrangement. The NDA was never about the BJP alone trying to dominate from a central position. In Bihar, they are adjusting with Nitish Kumar. In Punjab, they adjusted with the Akalis in the past.”

He adds that given the internal turmoil of the Congress, the TMC is fancying its chances of expanding in smaller states like Tripura and Goa, where it is easier to get a fraction of the votes if a party inducts a local leader, and to have a larger national profile by poaching disillusioned Congress leaders.

Unlike the 1960s, ’70s or late ’80s, when opposition parties would make common cause against the dominant party in the name of anti-Congressism, opposition parties now are unable to do the same. This is one of the challenges that the Congress faces at present--it has to fight not just internal dissidence and the BJP but deal with anti-BJP regional parties, who are no longer seeing it as a viable ally.