With No Chance Of Monsoon Till July 7, Delhi Reels Under Heatwave

The maximum temperature recorded at the Safdarjung Observatory, which provides representative data for the city, stood at 43.1 degrees Celsius, the highest for the month of July in nine years. 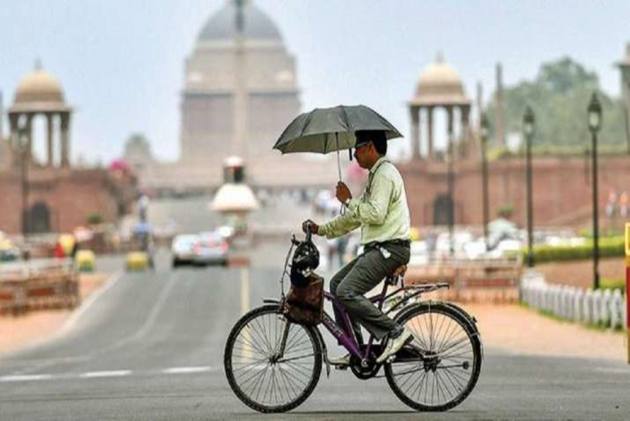 With no signs of rain, Delhi reported a maximum temperature of 43.4 degree Celsius. The intense heat wave swept across the national capital. Gurgaon reported 44.7 degree Celsius. The temperature in both the neighbouring cities was over 7 degrees Celsius more than the normal temperature for this time of the year, prompting the weather office or the India Meteorological Department (IMD) to classify it as "severe extreme heat". On Tuesday, Delhi recorded the first heatwave of this summer with the mercury levels increasing to 43 degrees Celsius.

The monitoring station at Mungeshpur recorded a maximum temperature of 45.2 degrees Celsius, the highest in the city on Thursday and eight notches above normal.

For the plains, a "heatwave" is declared when the maximum temperature is more than 40 degrees Celsius, and at least 4.5 notches above normal.

A "severe" heatwave is declared if the departure from normal temperature is more than 6.5 degrees Celsius, according to the IMD.

A heatwave swept the national capital on Wednesday, too, with the mercury soaring to 43.6 degrees Celsius, the highest recorded this year so far, the IMD said.

Another heatwave is likely on Friday.

The intensity of the heatwave and its area coverage are likely to decrease thereafter due to expected south-westerly winds from the Arabian Sea. But there won't be much relief during the next seven days due to the increase in humidity, IMD Director General Mrutunjay Mohapatra said.

He said there is "no chance" of Delhi and its neighbouring areas receiving monsoon rains till July 7. After that, the region will witness below-normal rainfall till the middle of this month.

The last time monsoon arrived so late in Delhi was in 2012.

The weather department said the delay in the arrival of the wind system is likely to impact agricultural operations such as sowing and transplantation of crops, irrigation scheduling and power requirements in the region, including Punjab and Haryana – the food bowl of the country.

"The monsoon has covered most of the country except parts of Rajasthan, Delhi, Haryana and Punjab. Since June 19, no progress has been observed. Mid-latitude westerly winds, unfavourable Madden-Julian Oscillation (MJO) and absence of a low-pressure system over North Bay of Bengal are some of the reasons," the IMD said.

According to the IMD, northwest India has received 14 per cent excess rainfall -- 85.7 mm rainfall against the normal of 75.3 mm since June 1, when the monsoon season starts.

Delhi has received just 29.6 mm rainfall against the normal of 64.1 mm during the period -- a deficiency of 54 per cent.

The meteorological office had earlier predicted that the wind system may reach Delhi by June 15, which would have been 12 days early.