Women Fare As Well As Men In Elections, Then Why The Prejudice?

Data analysis of the last four elections shows that out of 409 straight contests, women candidates won 184 times with a success rate of 44.98, which is quite encouraging. 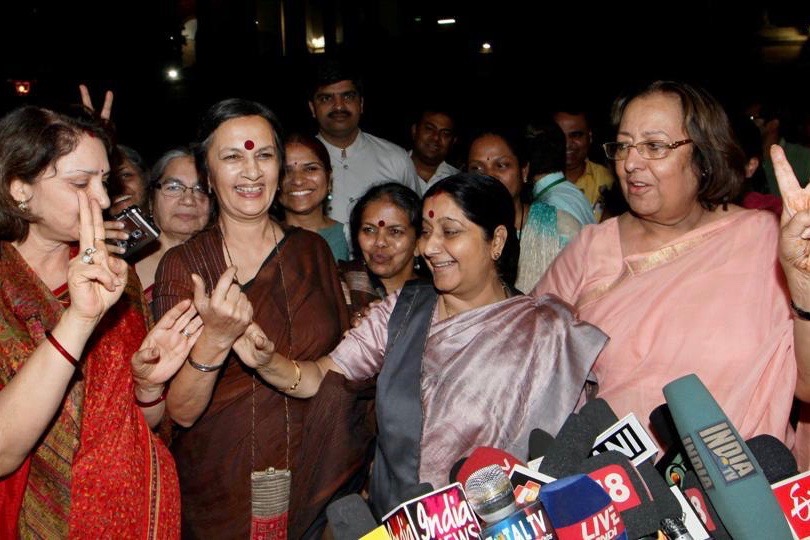 Data shows that in straight contests, female candidates have done nearly as well as their male counterparts, provided they are backed by prominent political parties

When the BJP chose Dr Heena Gavit, then a 26-year-old PG student with no political experience, to take on nine-time MP from the Congress party, Manikrao  Gavit, from Nandurbar Lok Sabha seat in the 2014 parliamentary elections, the contest looked one-sided in favour of Manikrao. However, the outcome surprised everyone when Heena defeated him by a margin of over one lakh votes.

The contest was not one-off. Thousands of women have contested elections since 1951-52 - when the first general election was held - and achieved success. But still they are perceived as a weak bet by any political party.

Women's Only Party Launched In Delhi, Want 50% Quota For Candidates In Lok Sabha

21 Million Eligible Women Will Not Vote In 2019: Exclusive Excerpts From 'THE VERDICT' by Prannoy Roy

The Verdict': Turnout Of Women Voters Will Be More Than Men In 2019 Polls

This is evident from the fact that national parties don’t show their confidence and give opportunities to women as much as they do to men because politics is seen as a man’s domain due to the ruthless use of money and muscle power.

Besides, women’s performance in elections is often analysed on the basis of a number of successful candidates out of overall female contestants in the fray. For instance, in 2014 parliamentary elections, out of total female candidates, about 9% could make it to parliament.

Such analysis portrays a dismal picture of their success, the reason being a lot of women enter politics as independents and without any political or financial support, and hence suffer defeat.

However, seen in the backdrop of a direct contest between a male and a female candidate, the chances of victory for the latter is nearly as good as for the former.

Data analysis of the last four elections shows that out of 409 straight contests, women candidates won 184 times with a success rate of 44.98, which is quite encouraging.

“It suggests that if a candidate is strong and comes from a national political party, the gender is an irrelevant factor,” Mirza Asmere Beg, a political science professor from Aligarh Muslim University, told Outlook.

“However, the question is how many of them are women candidates per se? They are either linked to political parties or some male political leaders. Not only that, often they are fielded from a bastion of their families so that it would be convenient for them to win,” Beg adds, agreeing to the fact that big parties should give more opportunities to women.

Interestingly, in 2009, out of 96 straight contests, women candidates outshone men in 47 constituencies with a success percentage of 51.04%.

The surprise elements were debutants like Congress Party’s Annu Tandon who defeated BSP candidate Arun Shankar Shukla, a history-sheeter, from the Unnao Lok Sabha constituency by over three lakh votes; and Trinamool Congress’ Shatabdi Roy who defeated Ram Chandra Dome of the CPI(M), who had held the seat since 1989.

Kaisar Jahan, came from a political family but was yet another debutante who fought on BSP’s ticket and defeated SP’s Mahendra Singh Verma in 2009.

Among powerful women candidates who emerged victorious were Meira Kumar who had defeated a BJP candidate Muni Lal in Sasaram; Dr Girija Vyas who trounced BJP’s Shrichand Kriplani with over 70,000 votes; Maneka Gandhi who defeated SP’s Dharmendra Kumar and Congress President Sonia Gandhi who trounced BSP’s R.S. Kushwaha with over 3.5 lakh votes in 2009.

In 2014, out of 130 straight contests between a male and a female candidate, the latter won 56 seats with 42.07 percentage of success rate.

Despite the significant success percentage, the inherent bias against women exists in politics like in many other fields.

“It’s because the power position has low visibility of women. Having a few does not make it equal,” says Kiran Bedi, Governor, Puducherry.

In 2015, Bedi was BJP’s chief ministerial candidate in the Delhi assembly elections, but she lost to Aam Aadmi Party’s SK Bagga in Krishna Nagar constituency in East Delhi.

Women activists say that having a perception that a male candidate is more successful than a female is a reflection of patriarchy in society which is rampant everywhere. That’s why given a choice, any party tends to nominate a male.

Congress party’s Preeta Harit, who is contesting against a state cabinet minister SP Singh Baghel in Agra, says that she looks at herself not as a female candidate but a candidate.

Harit, who is a political novice, resigned as Principal Commissioner of Income Tax to join the Congress party.

“I think it all depends on the social set-up and it will take a few hundred years to change. Women haven’t gained the stature of a female politician which is there in developed countries like the UK, US and Europe,” Harit told Outlook, adding that until the basics of the society - which will let women feel that they are equal in all aspects of life -  changes, nothing will change.