Women Not So Invisible In Farm Law Protests 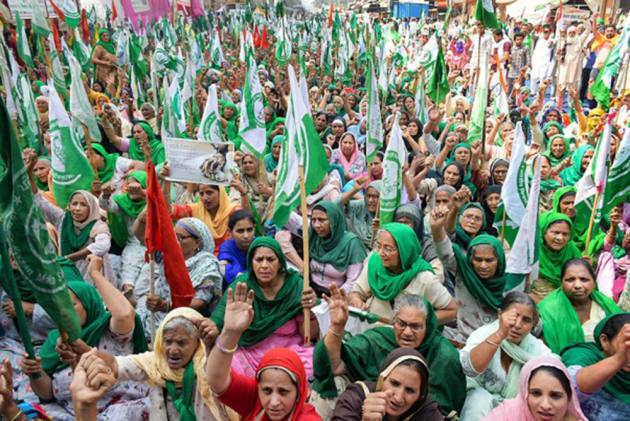 A day after celebrating Women’s Day at farmers’ protest sites, most of the ladies are back – or on way – home to attend to household and agricultural chores.

But for many of them, it was a hands-on experience and learning which they intend to share with others in villages or at block-level.

Thousands of women farmers had joined protests against the Centre’s farm laws at the national capital’s borders on Monday, March 8. They had taken leadership and managed the event that day, marking it as Mahila Kisan Diwas.

“This morning I was speaking to a group of about 150 women about the three new farm laws and how it would affect women more,” said farmer leader Kavitha Kuruganti.

“Initially, all said that it would equally affect both men and women farmers. But as we got talking, we realised it may have further implications for women,” she added.

“When I was explaining about Essential Commodities Act and food security, they reacted by saying how society trusts women are primarily responsible for taking care of hunger in the family,” said Kuruganti, member of the Samyukta Kisan Morcha (SKM).

According to her, amendment in Essential Commodities Act may even lead to scarcity or even non-availability of foodstuff. It will be the woman who will have to address such an issue, because “she can never let her family go hungry”.

Such messages are likely to be carried back to villages and shared with people there.

For Antbir Kaur from Udham Singh Nagar district of Uttarakhand, Manjula Devi of Sonepat, Haryana, or Harpreet from Ludhiana in Punjab, the cattle and the crops need attention. So do household jobs like cooking, washing, taking care of the children and elders.

But sexagenarian Jasbir Kaur Natt continues to stay with her family in a tent at Delhi’s Tikri border. She heads the steering committee of the SKM and is responsible for coordinating and handling the speakers and the crowd.

Jasbir has been a farmer-labourer rights activist for about three decades. She is state committee member of the Punjab Kisan Union.

Husband Sukhdarshan and daughter Navkaran are both supporting her actively at the site since the protest began. Her relatives sometimes come visiting and lend support.

She says women are actively participating – writing placards, cooking in langar and mobilising others. She firmly believes that it is now a “household movement”.

However, not all women can stay back all time. Since the sit-in began in November, women farmers are camping at the protest sites. They did participate in January 26 tractor march and other events.

“They were and will be part of this struggle. They’ll now reach out to local people. Specific responsibilities, tasks and events are being prepared by respective organisations,” said Hannan Mollah, general secretary of the All India Kisan Sabha.

“They come and go in groups, as and when required,” he added.

“They play a dual role, one at home and another at protests. So they may not be visible in large numbers all the time,” said Kuruganti.

Most participants at Delhi’s borders comprise women from adjoining districts of Uttar Pradesh, Haryana, and Punjab. Some had also come from Maharashtra and Madhya Pradesh.

Farmer leaders now intend to reach out to the states soon going to polls and seek defeat of the Bharatiya Janata Party, which they claim are ignoring the farmers’ cause.