The 78-year-old, in a press conference, said he will himself visit the ED office on September 27, adding he was ready for any "hospitality" at the hands of the central agency 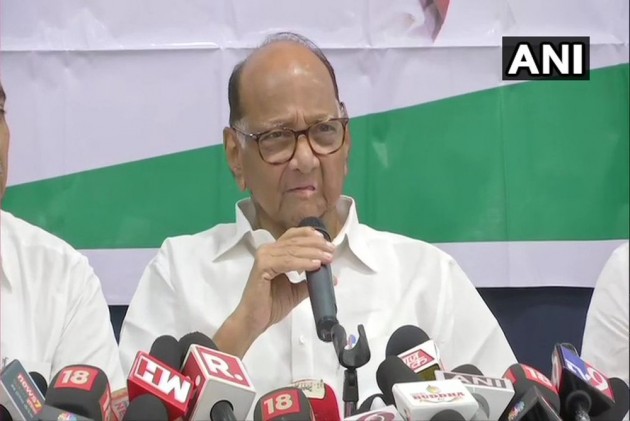 Nationalist Congress Party chief Sharad Pawar on Wednesday hit out at the Centre over the money laundering case filed against him by the Enforcement Directorate (ED), saying he won't bow before the "takht" (throne) in Delhi.

The 78-year-old, in a press conference, said he will himself visit the ED office on September 27, adding he was ready for any "hospitality" at the hands of the central agency. He added he will convey all the information to the concerned authorities when he visits them on Friday.

"I will be mostly out of Mumbai for Assembly poll campaigning. The agency officials shouldn't misunderstand that I am unavailable. I will go to them and give them whatever information they want," Pawar said.

Pawar said he believes in the Constitution of India.

"Maharashtra follows the ideology of Chhatrapati Shivaji Maharaj. We don't know bowing down before the Delhi takht (throne)," Pawar said.

The ED on Tuesday evening filed a money laundering case against Pawar, his nephew Ajit Pawar and others in connection with the Maharashtra State Cooperative Bank (MSCB) scam case, officials said on Tuesday.

They said an Enforcement Case Information Report (ECIR), equivalent to a police FIR, has been registered by the central agency under the Prevention of Money Laundering Act.

The case is based on a Mumbai Police FIR which had named Ajit Pawar, a former deputy chief minister of Maharashtra, and 70 former functionaries of the cooperative bank.

The registration of the case comes at a time when assembly polls are due in the state next month. The NCP and Congress are contesting polls in a coalition.