Agriculture minister Narendra Singh Tomar on Tuesday informed Parliament that the government does not have any proposal to end the minimum support price (MSP) system. 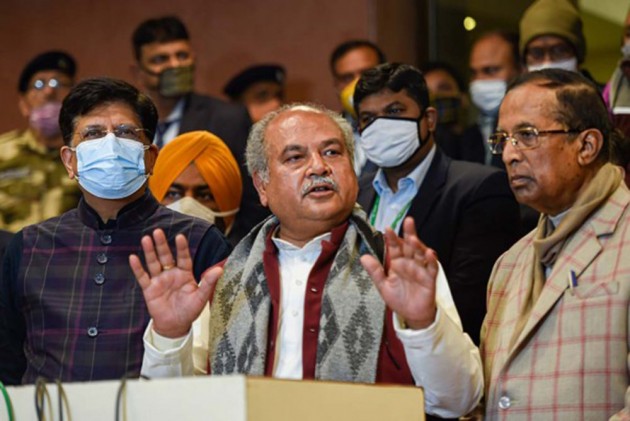 Responding to a question in the Lok Sabha, Union agriculture minister Narendra Singh Tomar said the government will not provide any compensation to the families of farmers who lost their lives during the ongoing agitation against new agriculture laws.

The minister made the statement while replying to questions raised by several Lok Sabha MPs related to dialogue with farmer organisations.

However, Tomar said that the BJP is willing to address farmers’ issues inside and outside Parliament. The minister also reiterated the Centre’s willingness to hold talks with protesting farm unions.

No Talks With Centre Until All Detained Farmers Are Freed: Protesting Farm Unions

However, Samyukta Kisan Morcha, an umbrella organisation consisting of numerous farm unions said that they will not resume talks with the government until all detained farmers are freed.

Meanwhile, when asked specifically if the government was aware that a "number of farmer protesters have died or fallen ill" while agitating, Tomar said the government during discussion with these farmers' unions "appealed many times that children and elders including women should be requested to go home in view of the cold and the Covid-19 situation”.

On whether the government proposes to give compensation to the families of the farmers who have died during the agitation, the minister replied: "No Sir".

Tomar further informed the Lower House that the government is negotiating with the farmer unions.

"So far, 11 rounds of meetings have been held between the government and agitating farmers’ unions to resolve the issues. Government had put forth one proposal after another to amend the farm laws," he said.

Tomar said the demands of agitating farmer unions were related to the three farm Acts -- The Farmers' Produce Trade and Commerce (Promotion and Facilitation) Act, 2020, The Farmers (Empowerment and Protection) Agreement On Price Assurance and Farm Services Act, 2020 and The Essential Commodities (Amendment) Act, 2020 and added that these laws have been stayed by the Supreme Court.

Tomar also said the government does not have any proposal to end the minimum support price (MSP) system.

Separately, similar questions related to deaths of farmers during the protest were asked by Lok Sabha MPs to the Home Ministry.

In his written reply, Minister of State for Home Affairs Nityanand Rai said police and public order are state subjects as per the Seventh Schedule to the Constitution.

"The responsibilities of maintaining law and order, including investigation, registration / prosecution of crimes, conviction of accused, protection of life and property etc. rests primarily with the respective State Governments.

"Central Government keeps a constant watch on activities of individuals and organisations having bearing on national security and public order through its security and law enforcement agencies. Requisite action is taken as per law, whenever necessary," Rai said.

Meanwhile, Tomar also informed Parliament that more than 2 crore farmers benefited from the government's procurement of seven commodities at the minimum support price (MSP) during 2019-20.

Tomar, in a written reply in the Lok Sabha, however added that it is difficult to assess the accurate number of farmers benefitting from MSP as the procurement is done by government agencies under various schemes.

"Besides, the overall market also responds to declaration of MSP and Government's procurement operations which results in private procurement on or above the MSP for various notified crops. Therefore, accurate number of farmers benefiting from MSP declaration is difficult to assess," Tomar said.

Further, Tomar said the government has declared MSP for 22 major agri-commodities of fair average quality (FAQ) each year in both crop seasons after taking into account the recommendations of the Commission for Agricultural Costs and Prices (CACP).

The government also extended remunerative price to farmers through its various intervention schemes.

The minister explained that the government extends price support for paddy and wheat through the Food Corporation of India (FCI) and state agencies.