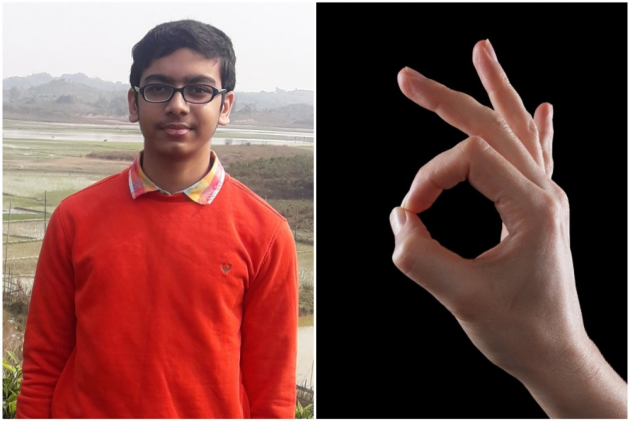 Tejas Shukla, a class 10 student of Kendriya Vidyalaya, Silchar, Assam was looking for his favourite television channel when he stumbled upon a news programme for hearing-impaired people on Doordarshan. A woman was using sign language to translate news events for the deaf hearing impaired.

Tejas couldn’t make anything out of the sign language. “That's when I realised how difficult it might be for hearing-impaired people to communicate with the general public. I started thinking of doing something with the help of technology to bridge the gap of the communication barrier,” Tejas said.

Fortunately, he came to know about a programme - Responsible AI For Youth - started by the Ministry of Electronics and Information Technology which offered a platform for school students to make them digitally ready for the future.

Tejas proposed his idea and it was immediately accepted. His concept was shortlisted out of thousands of ideas floated by students across the country.

“The whole process went on for almost a year within which I got training and mentorship to develop the web application. Finally, I have been selected as a winner along with 19 other students who also came up with innovative ideas in other fields,” Tejas said.

There are 430 million people in the world who suffer from serious hearing loss and about 900,000 are deaf and mute. Besides sign language, which is still extremely lesser known among the general public, there is no other way for speech and hearing-impaired people to communicate.

So how will his application help hearing-impaired people?

“You have to switch on the camera and point it towards a person who is talking in sign language. The app will translate it and convert it into either speech or text message depending on the option you select," Tejas told Outlook.

“Similarly, if a person wants to convey something in sign language, he or she can say or write something in the application. It will convert it into a sign language for a deaf person with the help of a virtual robot.”

Tejas said that he worked on this project along with his studies and his father who is an Assistant Professor in the Department of Physics at the Assam University was his source of inspiration at home. He also thanked his teachers and mentors in the school for their support.

“At present, since it has just been developed, the app can use only the English language. However, I can introduce other language options too. I am working on it and I hope that this application will turn out to be a game-changer for hearing-impaired people,” Tejas said.