Jagatsinghpur, Kendrapara, Bhadrak, Mayurbhanj, Keonjhar and Balasore districts in Odisha are expected to be the worst-affected regions in the state 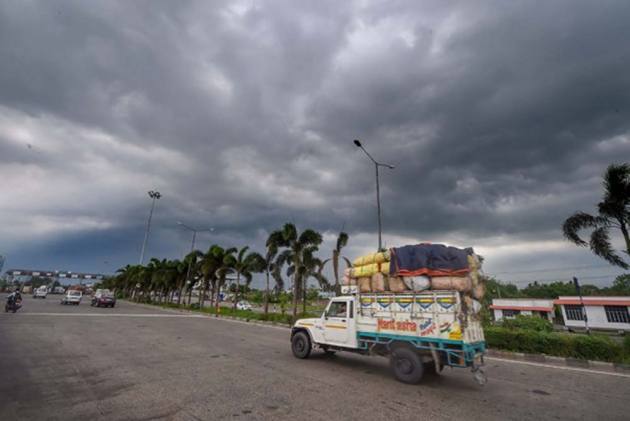 Cyclone Yaas is expected to intensify into a “very severe cyclonic storm” today as it hurtles towards Odisha and West Bengal.

The storm is likely to make landfall near Balasore in north Odisha at around noon tomorrow with a windspeed of 155 kmph-165 kmph, Met department officials said adding that the windspeed may increase to up to 185 kmph.

Jagatsinghpur, Kendrapara, Bhadrak, Mayurbhanj, Keonjhar and Balasore districts in Odisha are expected to be the worst-affected regions in the state while coastal areas of North and South 24 Parganas district of West Bengal will experience 90 kmph to 100 kmph wind speed, gusting to 120 kmph, officials said.

According to latest updates, the storm lay centred about 550 km south-southeast of Balasore as of Monday evening and it is moving in a north-northwesterly direction.

Anticipating the fury of the storm, Union home minister Amit Shah reviewed preparations including evacuation of people in vulnerable coastal areas and safe return of all ships and vessels as well as safety of Covud-19 facilities such as oxygen plants, mostly located in eastern India.

At a video conference held with the chief ministers of Andhra Pradesh, Odisha and West Bengal and the Lieutenant Governor of Andaman and Nicobar Islands, besides officials of concerned ministries, the minister said a 24x7 control room is functioning in the MHA, which can be contacted by them any time for assistance.

Shah specifically conveyed to the states likely to be impacted to make adequate power backup arrangements in all Covid-19 hospitals, laboratories, vaccine cold chains and other medical facilities, a home ministry statement said.

Yaas will cross the shore between Paradip in Odisha and Sagar island in West Bengal, close to Balasore, officials said.

"At the time of landfall near Balasore, wind speed will reach 155 kmph to 165 kmph, gusting to 185 kmph, along and off Jagatsinghpur, Kendrapara, Bhadrak and Balasore districts in Odisha and in East Midnapore district of West Bengal," Sanjib Bandopadhyay, the deputy director at the Regional Met Centre in Kolkata, said.

Wind speed on May 26 in Kolkata, Howrah and Hooghly will reach 70 kmph to 80 kmph gusting to 90 kmph.

Sea conditions will be very rough to phenomenal on May 26, the Met department warned and advised fishermen not to venture into the sea till further information.

In West Bengal, the coastal districts of East and West Midnapore, South and North 24 Parganas, along with Howrah and Hooghly are experiencing light to moderate rainfall in many places since Monday noon.

The Odisha government said it has rushed a large contingent of rescue and relief teams to Balasore district bordering West Bengal on Monday where Yaas in likely to make landfall.

A massive evacuation drive has been launched in all low-lying areas and vulnerable storm-surge pockets, following the IMD predicting a tidal surge of 2-4.5 meters during the landfall of Yaas, officials said.

"The process of evacuation would be completed by Tuesday afternoon. The government is determined to ensure zero casualty in the cyclone," they said.

The INCOIS-IMD joint bulletin said high waves in the range of 3.55.8 meters are being forecast till 11 pm on Tuesday beyond 10 km off the coast of Odisha from Gopalpur to Chandipur.

Chief Minister Mamata Banerjee said West Bengal government is targeting to shift at least 10 lakh people to safer places in a bid to avoid any loss of life.

"Cyclone Yaas's impact is going to be much more than Amphan, according to information we have received so far. This is going to affect at least 20 districts in West Bengal. The districts of Kolkata, North and South 24 Parganas and Purba Medinipur will be severely affected," she said.

At least 51 disaster management teams have been readied, keeping in view the possible devastations predicted by experts, Banerjee said.

Ferry services at 13 places have been shut, she said, assuring that the state has sufficient stock of relief materials that are kept ready at the block level.

"From Tuesday, we will continue surveillance for the next 48 hours from the control room at the state secretariat. Control rooms have also been made operational at district and sub-division levels," the chief minister said.

Extensive plans have been adopted for hospitals and vaccine centres, Banerjee said, adding that all types of medicines -- for diarrhea, fever, snake bites -- have been kept ready.

At least 1,000 power restoration teams have been kept on stand-by and once the cyclone subsides, they will start working, she said.

"We have asked the Army, NDRF, SDRF to be on alert. All agencies have been asked to be on stand-by so that we can use them when needed. We are ready for the cyclone," Banerjee said.

The Kolkata port said it will suspend all operations from May 25 till the cyclone subsides. Indian Coast Guard said all the 265 boats, which were reported to be in the Bay of Bengal by fisheries authorities, have returned to harbour in view of cyclone Yaas.

The Kolkata airport authorities said arrow bridges are being locked, while high-mast lamps are being uninstalled.

Pumps have been kept ready to remove water from the low-lying areas in the airport compound. Small planes will be kept tied to the ground, while precautions are also being taken to prevent any damage to large planes that were severely affected during Amphan.

So far, Air Vistara has cancelled two flights on the Kolkata-Mumbai and Kolkata-Delhi routes on May 26.

Several trains run by the South Eastern Railway have also been cancelled in the wake of the cyclone from Monday to Thursday. Among them are the Rourkela-Bhubaneswar special of May 25 and the Malda Town-Digha special of May 27, officials said.

The National Disaster Response Force (NDRF) has directed its rescue teams to ensure that the country's major medical oxygen generation plants based in Odisha and West Bengal are "running and alive" during Cyclone Yaas.

NDRF director general (DG) S N Pradhan said the force has earmarked a total of 149 teams for undertaking evacuation and rescue operations, of which 99 will be deployed on the ground and the remaining 50 will be available at its various bases across the country for quick airlift, if required.

Pradhan added that all the states expected to face the fury of the 'very severe cyclonic storm' have been asked to "not take any chance" and evacuate each and every person from its likely path well in time.

This advisory has been reiterated specifically in the backdrop of the recent on-sea accident that took place during the onslaught of Cyclone Tauktae on the western coast where over 70 personnel working at a barge off the Mumbai coast have been killed till now.